Cambridge United bowed out of the Carabao Cup at the Second Round stage as Premier League side Southampton secured a professional 0-3 success at an electric Abbey Stadium...

Scotland international Che Adams was on hand in the opening stages of each half to convert home from close-range. Although the U’s continued to plug away and attempt to reduce the deficit, the Saints proved too strong as Dominic Ballard wrapped up the victory at the death.

Preparing to pit their wits against the Saints for the first time in the club’s history, there was a real sense of optimism in the air for the hosts – who frankly had nothing to lose. The evening was a chance to further showcase their pedigree when it comes to dispatching higher-tier opposition in cup competitions. Wary, the visitors opted with a strong core of wisdom and potential, arriving in a buoyant mood after a comeback victory over Leicester City last time out.

Mark Bonner named seven changes from the side which battled to a point against Charlton Athletic three days earlier. George Williams, Lloyd Jones, Paul Digby and Sam Smith retained their places, whereas Fejiri Okenabirhie made the 18 for the first time.

In a lightning start, the Saints looked to have acquired the perfect start on 3 when Adams rifled against the post and in the net – however, the ball made contact with his hand in the process, cutting short the celebrations.

Moments later, Mohamed Elyounoussi executed a delightful flick to outwit the U’s before firing straight at Will Mannion who got down low.

The deadlock was broken on the 15th minute when Lewis Payne bursted down the right wing before picking out Adams with a teasing delivery which the Scottish striker poked home.

Despite being under the cosh, the U’s posed a threat when they did break. On the 19th minute, a long throw was gobbled up by Joe Ironside, who used his strength to set up Saikou Janneh – the winger clattered against the crossbar before the referee blew his whistle for a foul.

Mannion was called into action five minutes later, standing strong to deny S. Armstrong’s fierce shot from an angle – it landed to Ibrahima Diallo, but the midfielder couldn’t guide the follow-up home.

Causing havoc, Elyounoussi cut into the far right of the penalty area on the 36th minute, pulling the trigger but being denied by a critical United block as it nestled against the side netting.

Bonner’s backline held firm once more in the next dangerous attack. After Adams picked out A. Armstrong, the striker picked out the corner sweetly – fortunately for the U’s, Williams was on hand with a last-ditch block.

The U’s most poignant spell came on the cusp of half-time. Using his power to ensure the ball sticked to him, Ironside brought in Jack Lankester who twisted and turned but couldn’t fire at goal from 10 yards. Eventually, the ball landed to Janneh, who grazed the side netting.

Whilst the visitors may have enjoyed the possession and a foray of attempts, it remained a slender scoreline - one the U’s were very much still in.

Coming out of the blocks with their fighting chance, the men in amber made a promising start. After being slipped in, Smith jinked into the box and drilled an attempt inches wide of Alex McCarthy’s left stick.

Adams was celebrating his brace on 55 when Oriol Romeu’s menacing shot from 25 yards was well-saved by Mannion but fell straight at the lurking striker who pounced despite the number 25’s best efforts to retrieve it.

The Saints went agonisingly close to putting the game to bed on the hour mark when Yan Valery drove forwards and tested his luck – only to be denied by a fine, low save at the far post from Mannion.

In spite of that, the match certainly wasn’t one-way traffic. On 72, Brandon Haunstrup’s sublime deep cross from the left was flicked on by the head of Ironside and towards a looming Lankester at the back post who couldn’t direct goalbound from a tricky angle.

Moments before additional time, Ballard capped off his first-team debut for Hasenhuttl’s men with a goal after tapping home from yards after Mannion expertly denied his initial cannoned attempt. It concluded a challenging night for United, but one they had learned so much from.

Up next, it’s back to the bread and butter that is League One on Saturday (27th August) as the U’s welcome struggling Burton Albion to the Abbey. Back the boys as they look to return to winning ways.

Man of the Match: Ibsen Rossi 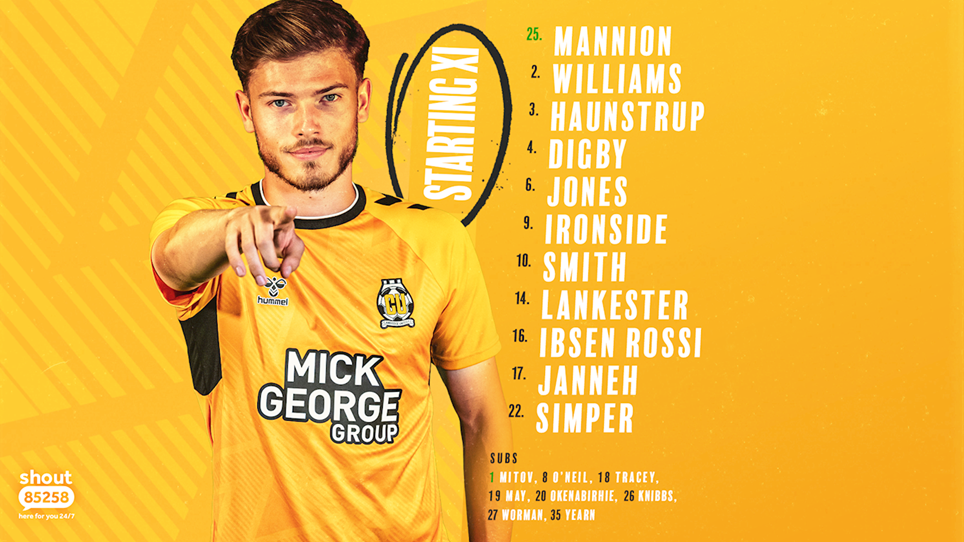 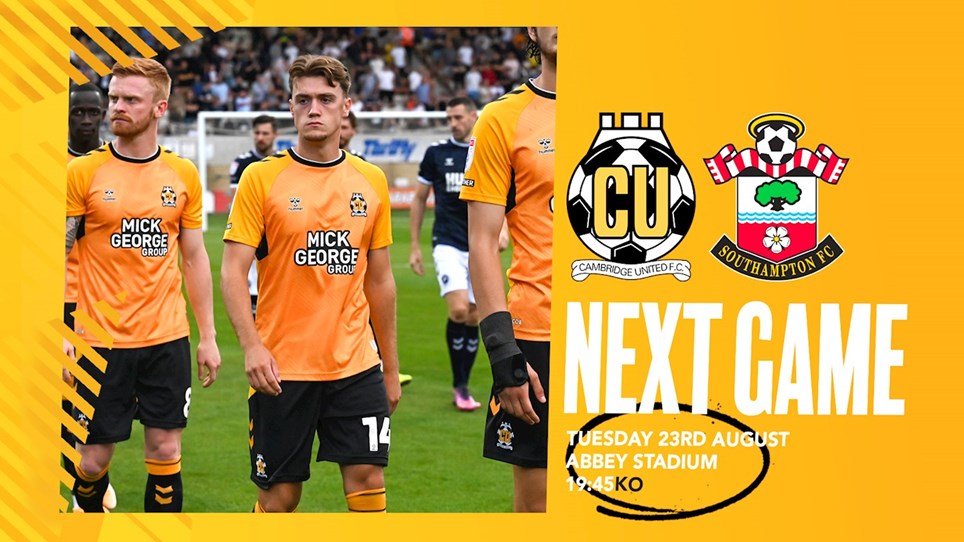 Next up, U's face off with Saints in Carabao Cup


Next up for the U's is a Carabao Cup tie against Premier League opposition as Southampton visit the Abbey Stadium... 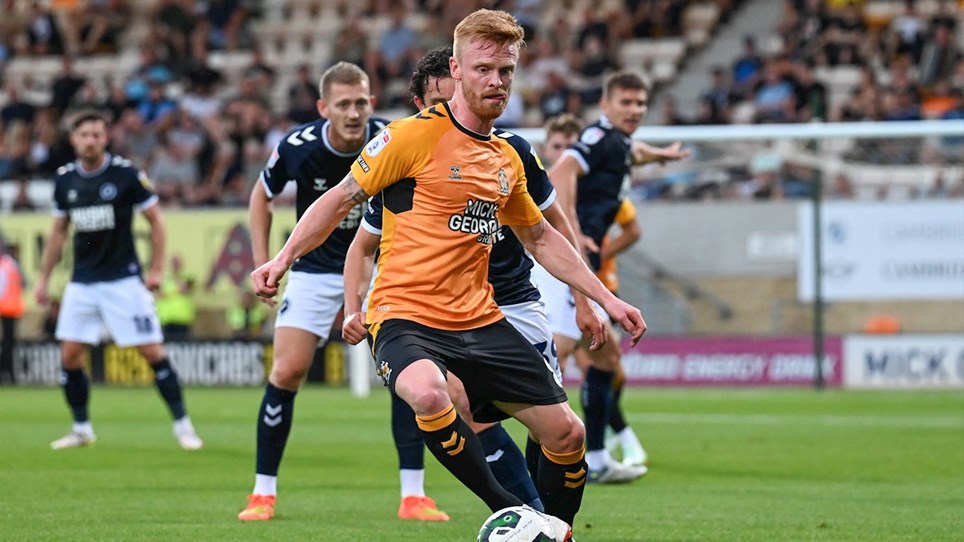 
Cambridge United upset the odds by dispatching Championship outfit Millwall 1-0 in a well-handled Carabao Cup First Round clash at the Abbey Stadium...


The U's return home to take on Premier League opposition in Round Two of the Carabao Cup... 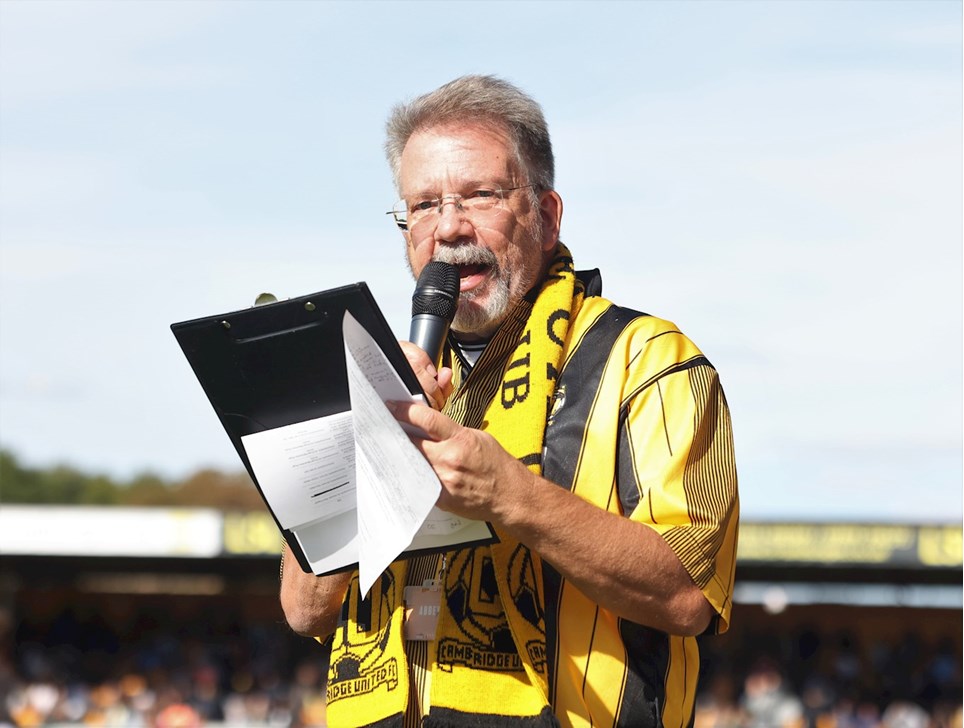 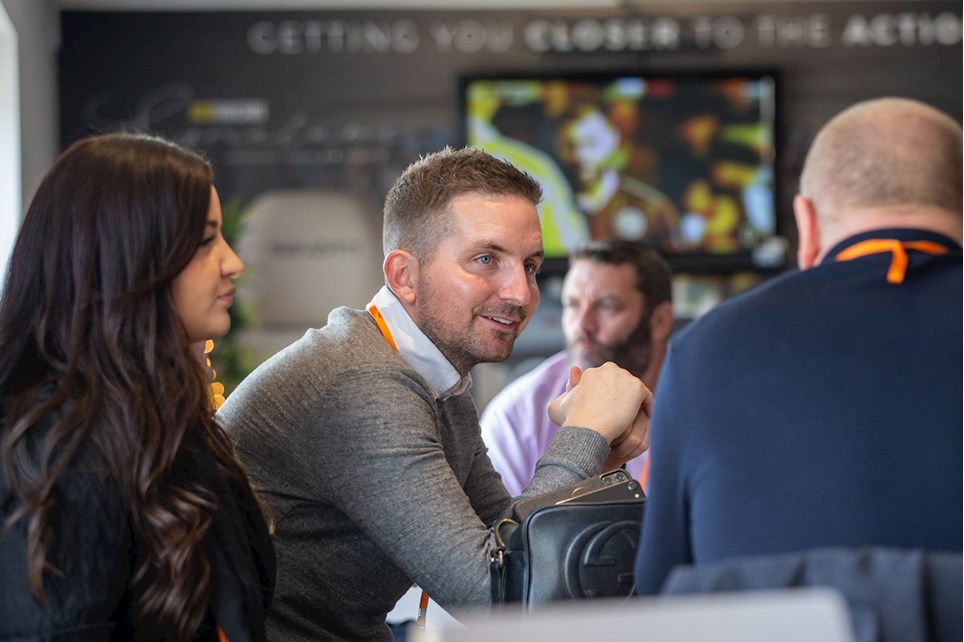 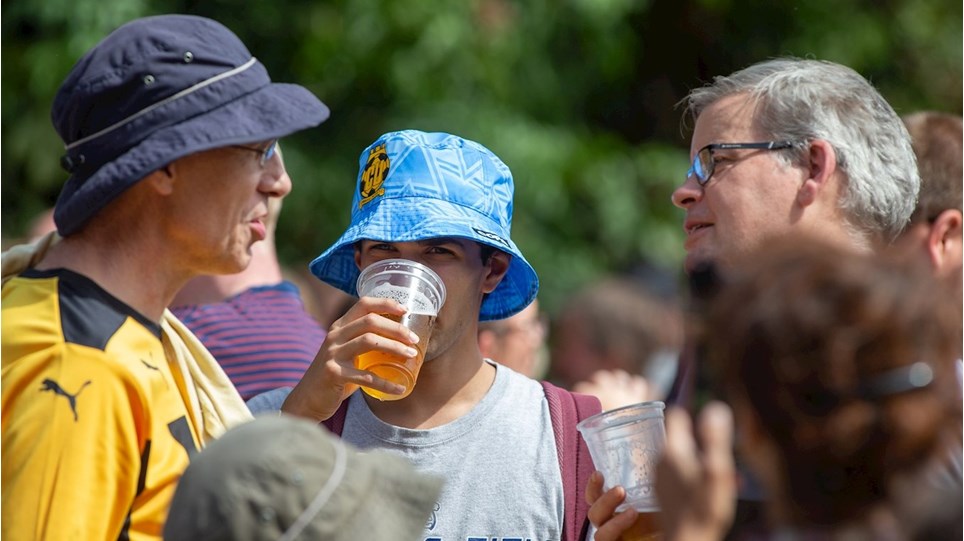 
Supporters looking for a route to and from next Tuesday's game at Ipswich Town should consider travelling with the CFU Supporters Coach...