United will look to build upon Saturday's draw against Fleetwood as they welcome Gillingham to the Abbey this Tuesday...

Mark Bonner’s men come into this fixture off the back of an entertaining draw with Simon Grayson’s Fleetwood Town – a game in which The U’s found themselves behind after just two minutes, and despite Adam May and Shilow Tracey striking either side of the half-time whistle to turn the affair around – they were unable to hold out for the three points following an impressive maiden goal from Patrick Lane, earning the visitors a point.

Prior to Saturday’s clash, Cambridge United had been enjoying a draw-less spell which saw The U’s win five of their previous seven games, only falling to defeats against Championship Millwall and an impressive Lincoln City side during the run.

A towering header from Joe Ironside, as well as a thunderous volley from Liam O’Neil sealed the three points against Portsmouth a fortnight ago, earning Mark Bonner’s side their first ever win at Fratton Park, having failed in eight previous attempts.

Kent’s only Football League representatives arrive at the Abbey Stadium having failed to win in any of their previous five League One outings, only tasting victory this month in an EFL Trophy tie against Colchester United.

Despite boasting an arsenal of consistent goal scorers at this level, Steve Evans’ side have struggled to find their goalscoring touch this season, only managing to muster up more than one goal in a single game on one occasion – in the Gills’ only League One win against Morecambe in August, winning 2-1 on the day.

Most recently, despite facing 25 shots and having less than 30% of the ball, Steve Evans’ men held on for a point at the Kassam Stadium on Saturday thanks to Alex MacDonald’s strike against his former employers, cancelling out Matty Taylor’s opener for the hosts. Before that, an own goal prevented the Gills’ from tasting defeat against Charlton, after Elliot Lee had originally given the visitors the lead after 18 minutes.

The U’s and Gills have battled it out on 22 occasions throughout history, with the Kent based side boasting a greater record over Mark Bonner’s men – winning on 13 occasions, with United winning on seven.

A Paul Mullin penalty, followed by a great Luke Hannant strike from 25-yards out in the second half was enough for The U’s to progress through to the Papa John’s Round of 16 the last time the two sides clashed in December 2020. Mark Bonner’s side would then go onto get knocked out in the next round – losing 1-0 to Oxford United.

The last time the two sides faced off in the league came back in October 1999, where Andy Thomson’s brace earned the Gills a 2-1 win over Roy McFarland’s U’s in a Division Two clash.

Despite struggling to find many wins this season, U’s boss Mark Bonner is expecting a tough challenge against Gillingham: “At the moment they will be trying to find that steppingstones to winning performances but at the same time, they are showing themselves to be a really tough team to beat and a tough nut to crack. Some good sides of the failed to do that so far this season, so we know that that they will give us a challenge.

“We just need to know how we take that next step against them – firstly how we can be competitive in the game as they are a physical team that will give us a lot of challenges and make us defend our box, and secondly, how can we convert the chances we get and try to be dominant for long periods of the game.”

Gills’ manager Steve Evans is expecting an equally tough game against Cambridge United on Tuesday: “A real tough game. Cambridge are an excellent team and that was demonstrated with a 2-1 win away at Portsmouth last week. We will work on the training ground to prepare for another tough game. There were six draws in League One [at the weekend] and only an injury time soft penalty prevented it from being seven, so that shows clearly how close and tough this league is.”

Following refereeing in Shrewsbury Town’s 2-1 in over AFC Wimbledon on Saturday, James Bell will head up The U’s clash with Gillingham on Tuesday. In a relatively quiet game for the Yorkshire born official, goals from Luke Leahy and Daniel Udoh sealed a comeback win for the Shrews, after Dapo Mebude had originally given the visitors the lead.

James Bell’s last U’s game came back in October of last season, sending off Jake Hesketh late on in Crawley Town’s 2-1 win over The U’s.

Stephen Finch and Daniel Bonneywell have been appointed as the game’s asistants, with Charles Breakspear overseeing the clash as fourth official.

The clash kicks off at 7:45pm on Tuesday 28th September and tickets available online, over the phone by calling 01223 566500 (option 1) or by visiting the Abbey Stadium Ticket Office.

The best way to stream the match is by doing so via the EFL iFollow App. Please note, the App is only for streaming and supporters can't purchase their Match Passes through the application.

It proved a frustrating evening at the Abbey Stadium as Cambridge United fell to a 0-2 defeat to Gillingham.

In a battling encounter, Vadaine Oliver drew first blood for the visitors before Danny Lloyd’s thunderous attempt on the hour mark put the game to bed in what was a professional away performance from the visitors.

Mark Bonner made two changes to the team that shared the spoils with Fleetwood Town three days earlier – Lloyd Jones returned to the fold and Sam Smith was restored as the U’s tinkered with formation.

United approached the encounter in fine form, having lost just one of their previous six leagues games in what had been an encouraging start. The Gills, on the contrary, were in the midst of a sticky injury situation and were eager to banish an ongoing five-game winless league run.

The visitors started in the ascendency, causing havoc from their early corners. George Williams was forced into action on the 2nd minute, making an astute clearance from his own goal line after the ball fell to an unmarked Rhys Bennett from 10 yards.

The U’s found themselves a goal behind on the 25th minute. Robbie McKenzie’s floating cross from the right was flicked on well by John Akinde towards Oliver who latched onto the loose ball and poked home.

The response was a positive one. Continuing to press with intensity and linking up strongly down either flank with slick movements, the hosts predominantly threatened the Gills with some menacing deliveries into the box crafted out by Williams and Iredale.

It proved the last action of a testing first half for the U’s, who had been frustrated by a stubborn Gills defence and put through the gears physically. Ultimately, they were very much still in the game.

Despite a period of possession and a flurry of corners after stepping up the tempo, the U’s were in desperate need of rejuvenation after Gillingham extended their lead to two goals on 59. After intercepting a misplaced pass, Lloyd marauded forward and cannoned a barnstorming attempt into the top corner.

Endeavour to claw back a goal was still on show for the hosts, but Steve Evans’ side were proving a tough nut to crack, limiting them to very little clear cut attempts as the match petered out in the midst of torrential outpour on what was a stern examination.

As you’ve done so fantastically this season, be sure to back the U’s once more when they look to bounce back as they hit the road again on Saturday (2nd October) where they take on Dave Artell’s Crewe Alexandra. 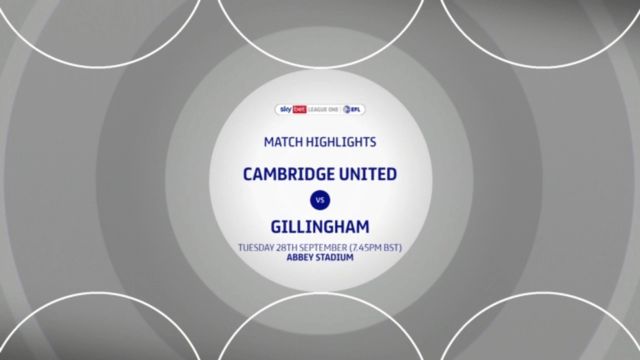