Mark Bonner’s men will be looking to build on a respectable draw against promotion chasing Wigan Athletic on Tuesday at the Abbey Stadium. United were left frustrated having surrendered a two-goal lead in the final ten minutes, after Joe Ironside and Adam May struck either side of the half-time whistle, before Callum Lang’s late double salvaged a point for Leam Richardson’s side.

The U’s had previously tasted defeat in their two outings prior to Tuesday night’s draw – after facing tricky trips to Stadium MK and the New York Stadium. Despite Sam Smith scoring in both, United were unable to return to the Abbey Stadium with any points after falling to 4-1 and 3-1 defeats respectively.

Sunderland head to the Abbey off the back of a frustrating draw throughout midweek, with the Black Cats throwing away the lead against the 10-men of Shrewsbury Town. Alex Pritchard had given Lee Johnson’s side the lead after quarter of an hour, and despite the hosts being reduced to 10 – after David Davis was dismissed in first half stoppage time – the Tyne and Wear club couldn’t hold on as Daniel Udoh levelled the score midway through the second half.

Prior to Tuesday’s draw at the Montgomery Waters Meadow Stadium, the Black Cats returned to winning ways, having lost the previous four games in all competitions. Goals from Luke O’Nein and Aiden McGeady within the final eight minutes sealed an important win over Ipswich Town in front of more than 31,000 spectators at the Stadium of Light last weekend. 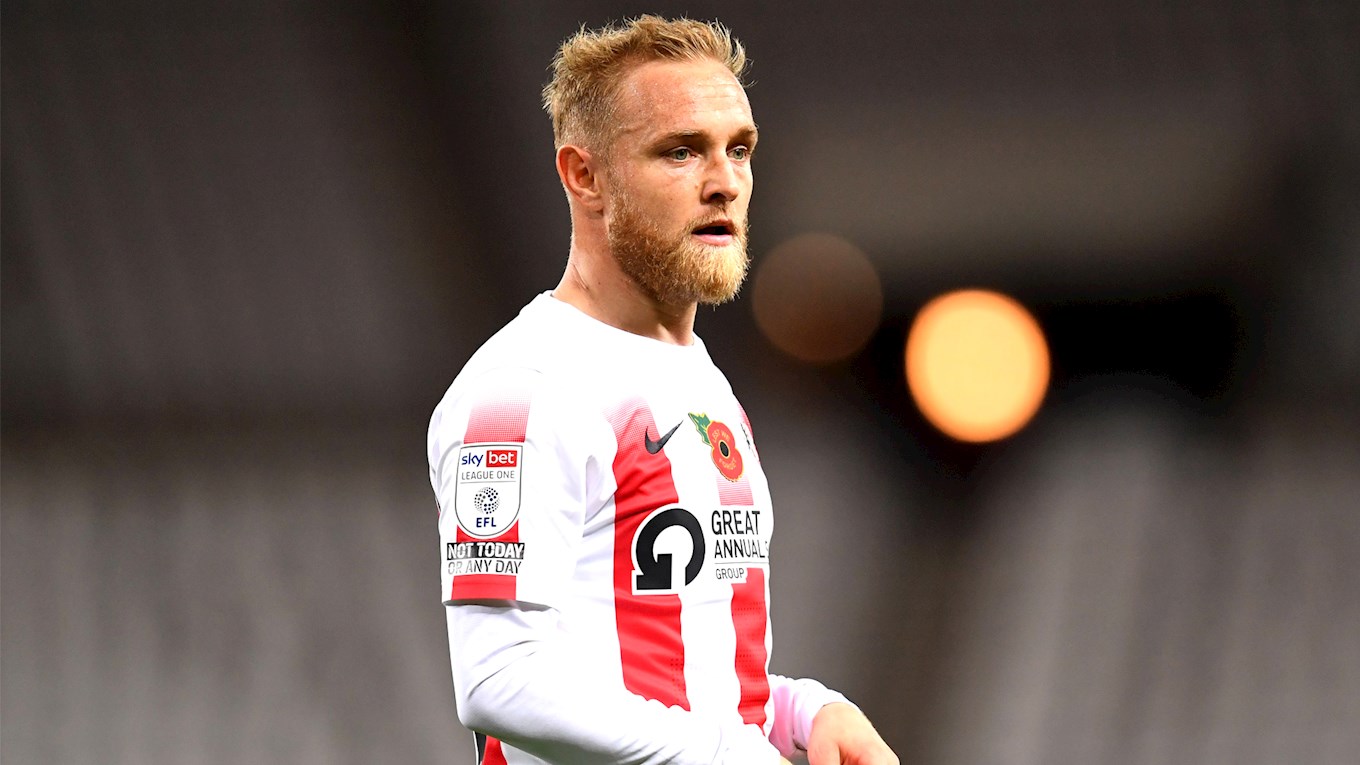 The former Norwich City man, who looked set to have a shining career at the top of English football, looks to have finally settled down in the Northeast, after a £12m move to then Premier League Huddersfield stunted the attacking midfielder’s progress. The Tottenham Hotspur academy graduate, who made two appearances for Spurs, has contributed to three goals (1G, 2A) in six starts for the Black Cats this season, most recently scoring and impressing in Sunderland’s draw with Shrewsbury Town on Tuesday night.

It’s a case of the less said the better about the last clash between the two sides, as the U’s were unfortunate enough to meet an in-form Sunderland side in the League Cup back in 2002, with the then-Premiership Black Cats cruising to a 7-0 win at the Abbey Stadium.

Saturday’s visitors Sunderland boast a historical advantage over the U’s, having won five of the 12 clashes between both sides, two better than United’s three wins. The last league meeting saw the sides play out an entertaining 3-3 draw in front of over 16,000 spectators at Roker Park in the old First Division in 1993.

U’s Head Coach Mark Bonner prior to Saturday’s clash: “Sunderland started the season brilliantly. They have had a run of games that perhaps has not gone as well as they would have hoped, but you look at the league table and they are still right in touch with the top, which is where they expect to be.

“They will come here expecting to win and needing the three points, because that is the expectation and demand of that club, really. We know on our day we can be a match for any team.”

Shilow Tracey faces a race against time to be fit ahead of the U’s clash with Sunderland on Saturday, with Mark Bonner saying he will be hoping the winger can get through the next couple of training days relatively pain free, before making a desicion on the winger being involved on Saturday.

Lloyd Jones is back in training and running. The centre half has done a bit of ball work but has yet to join the group, so will be assessed prior to this weekend’s game, however the former Liverpool man remains a major doubt ahead of Saturday.

For Saturday’s visitors, Aiden McGeady will miss a sustained spell of action after picking up a knee ligament injury at Shrewsbury Town in midweek. With Johnson saying prior that, “It’s a Grade 2 MCL for Geads – so I’d say about 8-12 weeks out for him.”

Dennis Cirkin has been confirmed by Johnson to be missing several weeks with a hernia issue, with the full-back due to undergo surgery imminently as he begins the road to recovery.

Finally, Luke O’Nien is expected to miss Saturday’s game at the Abbey due to a persistent injury affecting the fullback’s shoulder.

Robert Lewis has been appointed as the game’s referee, with Matthew Wilkes and Lisa Rashid coming in as his assistant referee’s. While Scott Williams will oversee the fixture as Fourth Official.

U’s fans are to be reminded that Saturday’s game is a complete sell-out and to not make the trip to the Abbey Stadium as tickets will not be available.

Tickets are available for the U’s clash Papa John’s Trophy Second Round clash with Walsall on Tuesday the 30th of November, which can be purchased here. 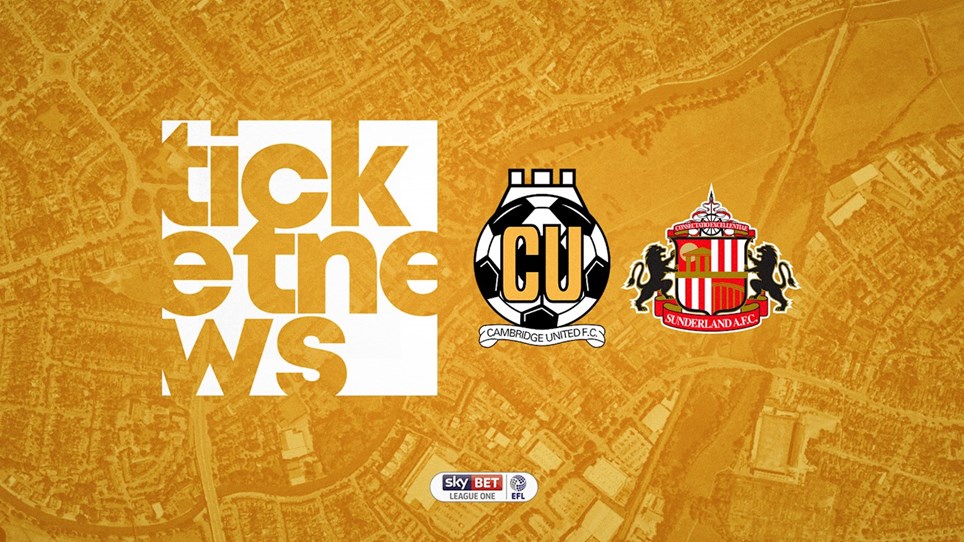 
Tickets are now on sale for Cambridge United's upcoming home game against Sunderland...

Cambridge United fell to a frustrating 1-2 defeat to Sunderland in a Sky Bet League One encounter played in torrential conditions at a sold-out Abbey Stadium...

The Black Cats took the lead through Alex Pritchard’s wind-assisted corner - before Sam Smith struck an instant response with a sweet strike. A first-half flurry of goals concluded with a sublime Nathan Broadhead finish, which ultimately proved enough to separate the sides despite a barrage of United pressure.

Mark Bonner ringed the solitary change from the team that shared a point in a topsy-turvy encounter against Wigan Athletic in midweek. A recuperated Wes Hoolahan returned to the fold - replacing Jensen Weir as the U’s retained their 4/2/3/1 shape.

Packed to the rafters, there was a real vibrant atmosphere around CB5 pre-match ahead of a first league encounter between the sides since 1993. United approached the clash in high hopes after consistent form of two wins, two draws and two losses. One of several congested in mid-table, they also obtained a healthy cushion from the relegation zone. The visitors arrived on the back of one win in five, but a rampant start to the campaign, which has also seen them reach the Carabao Cup quarter-finals, meant they made up the play-off pack.

The U’s kicked things off in the ascendency, presenting themselves with an early attempt at a wind-swept Abbey. Smith picked up the ball from the right-hand side and embarked on a dazzling 2nd minute run, jinking past the visitors’ backline and waltzing into the box being pulling the trigger from 15 yards which was well-blocked.

The Black Cats probed for an early opener, generating some dangerous opportunities and finding their feet well. They capitalised on tricky conditions after 15 minutes when Pritchard’s direct corner was heavily wind-assisted towards goal, bouncing off the post and nestling beyond scrambling United colours.

The hosts’ response was valiant, conjuring up an equaliser on the 26th minute thanks to an attack that oozed class. Wes Hoolahan - orchestrating well from the middle of the park - crafted an excellent passing movement with Joe Ironside, before the ball fell to Smith in the penalty area who took a light touch and drilled home emphatically to bring the teams level.

Weathering a slight storm on the pitch as well as off it, United were forced to dig in deep as they were continuously tested defensively. Paul Digby applaudingly headed off the line to conclude a quick succession of menacing corners – which understandably continued to prove quite kryptonite.

They were left helpless, however, on the 35th minute when Broadhead picked his spot and cannoned a barnstorming attempt from 25 yards to ensure a swift return to a one-goal advantage for Lee Johnson’s men.

It proved the last action of an intriguing first half with the conditions ultimately halting both sides from playing attractive football, despite three sublime finishes. Nonetheless, with the wind in their favour after the interval, the U’s remained optimistic that they could be handed golden opportunities.

That was deemed to be the case as Bonner’s men forced a great diving save from Ron-Thorben Hoffman on 53. An exquisite Hoolahan cross was met by Ironside, who executed a diving header which was kept out by the Bayern Munich loanee.

A real carbon-copy, it was the U’s turn to threaten through corners down the left. First, Ross Stewart cleared off the line before Adam May then floated a corner goal-bound which Hoffman rised highest to poke away.

Passing its hour mark, the torrential state of affairs forced this to be a game for the ages with United dominantly piling on the pressure and looking the likeliest to bulge the onion bag next. To their credit, the Black Cats were assuringly clearing their lines as the plethora of balls was pumped into the six-yard box.

After Smith dispossessed in a dangerous area on the 75th minute, he teed up May who, after hearing cries of “shoot” from the crowd, took a light touch and fired an attempt that lashed inches wide of Hoffman’s right post.

Instantly, the visitors marauded up the other end through Broadhead who, from a tricky angle down the left, slotted agonisingly wide of the post in what probably would have killed the game.

Determined to grab a share of the spoils, the hosts injected fresh legs in Harvey Knibbs and Shilow Tracey, who made a first appearance since early-November.

A pinpoint cross down the left from Harrison Dunk on the 88th minute frustratingly evaded Ironside and into the gloves of Hoffman – the slightest of touches surely would have resulted in the equaliser. The kitchen sink was thrown, but ultimately it wasn’t enough as the boys in amber suffered defeat.

Attention turns to the Papa John’s Trophy on Tuesday night (30th November) as Cambridge United look to progress from the Round of 32 as they take on League Two outfit Walsall here at the Abbey Stadium.

Man of the Match: Hoolahan


Tickets are now on sale for Cambridge United's upcoming home game against Sunderland... 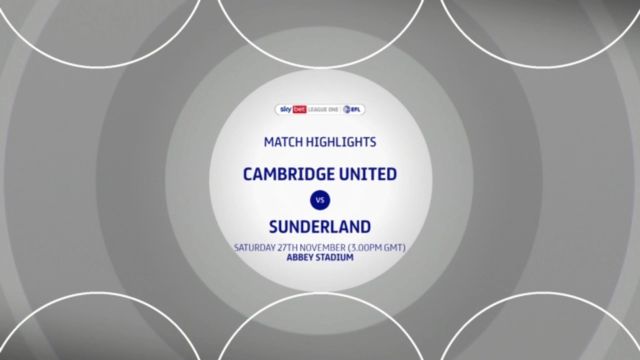 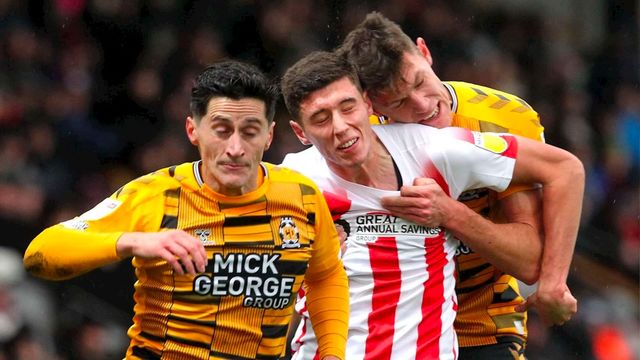