United, backed by a sold-out amber army, travel to southwest London this weekend (26th March) looking to end a run of five games without a win…

Tickets for Saturday’s Plough Lane clash are now sold out, with 1,206 fans expected to make the journey from Cambridgeshire on Saturday for the 3pm kick-off.

The Dons will be aiming to move above of the relegation places with a win on Saturday, having dropped into the bottom four last weekend following a 3-1 defeat at the Jonny Rocks Stadium.

Jack Rudoni had initially given Mark Robinson’s side the lead after finishing off a brilliant Dons counterattack on 24 minutes, before three quickfire Cheltenham goals in the final 10 minutes succumbed Wimbledon to their fourth defeat in as many games – and in turn denied the Dons their first win since December.

Despite dropping into the bottom four last weekend, following Gillingham’s draw with Sheffield Wednesday, a win on Saturday could see Robinson’s men leapfrog both the Gills and Fleetwood Town and up to 19th, with both teams not in action this weekend due to international commitments.

How United head into the fixture:

Warren O’Hora’s second half strike condemned the U’s to their second defeat in two, and in turn ended United’s six game unbeaten run at the Abbey Stadium last weekend – despite Mark Bonner’s side putting up a valiant effort to deny MK.

Harvey Knibbs, on two occasions, saw strikes go agonizingly wide as United pushed hard for an opener in the game before former Brighton & Hove Albion defender O’Hora slotted in from the edge of the area, somewhat against the run of play, to keep MK’s automatic promotion hopes alive.

United will be hoping to end a run of five games without a win in League One this weekend at Plough Lane, with a win potentially moving Bonner’s men up to 14th in the table, depending on other results.

Jensen Weir was on hand to fire United to victory in the reverse fixture five months ago, with the on-loan midfielder arriving late into the area to head home just two minutes after the restart.

Richard Money’s tactical move, bringing on both Josh Coulson and Harrison Dunk after half an hour, proved to be a stroke of genius when the U’s last faced the Dons in southwest London in 2015, albeit five and a half miles away from their new home at Plough Lane.

Having fallen behind at Kingsmeadow after Tom Elliott fired the Dons ahead after just 12 minutes, United regrouped at half-time and quickly turned the game around just three minutes after the restart, as goals from Leon Legge and current U’s first team coach Barry Corr sealed a comeback win.

U’s head coach Mark Bonner is wary of the battling spirit his side will face on Saturday: "They are one of the highest pressing teams in the league and we know they will come out with a real energy. We know what to expect - a team, manager, club and fans fighting for survival in the league.”

George Williams on how to get the better of the Dons: "We will do a bit of analysis on them and see where we can exploit them, but we have just got to focus on ourselves. Our best games have been when we have focused on ourselves, played the way we play, and everyone has been at it and that will be key.”

Darren Handley will make the step up to League One this weekend for the first time since MK Dons’ win over Burton Albion in January. With the referee largely spending this season officiating in the fourth tier.

For the first time since September 2019, when the U’s ran out 4-0 winners over Mansfield Town in League Two, Handley will head up a game involving Cambridge United.

Handley will be joined by assistants Garry Maskell and Matthew Lee ahead of Saturday’s clash, with Sam Purkiss being appointed as the game’s fourth official.

Cambridge United returned to winning ways after five games without, thanks to Adam May’s superb strike that saw off Wimbledon at Plough Lane…

After a tense and scrappy first half, United clicked into gear in the second and took the lead within a minute of the restart with May’s curling effort from distance. The U’s never looked like giving up their advantage and took another huge step to consolidating their place in the third tier next season.

Mark Bonner named just one change from the team that narrowly lost out to the Dons of Milton Keynes a week ago – with Adam May coming in for Liam O’Neil who missed out with a dead leg.

Played in-front of a capacity Plough Lane crowd, the anxiety felt inside the ground following a wretched run of form that has seen the hosts fall into a relegation battle, translated onto the pitch as the game got off to a scrappy start with neither side able to wrestle control of the contest.

It was the home side who were dictating terms though, with Wimbledon enjoying the majority of the ball and territory, but the U’s had their wits about them defensively as they dealt with everything that they were faced with inside the opening 30 minutes. A glancing header that fell wide of the post from Henry Lawrence was as close as the Wombles came.

United’s attacking threat was minimal until the 35th minute, when Brophy led a counter-attack down the left hand side before swinging a teasing cross towards the back-post, which Osew did well to defend on the cover by chesting it back to his goalkeeper.

Osew then had a shot for himself on the 39th minute after good work from Cosgrove to get in-behind, but Digby was well positioned to make the block before United eventually cleared the danger.

Cambridge’s only other moment up the other end came after Jones broke through the lines before playing Dunk through on the overlap, and when the challenge came in the ball ricocheted dangerously back towards the Dons goal, but safely into the goalkeepers hands.

If the first got off to a slow start, the second half couldn’t have been more different. Just 50 seconds in, the U’s went on the attack and after Ironside kept the play alive with a simple pass back to Adam May who was lurking 25 yards out, the midfielder found the top corner with another wonder strike to add to the collection to put United 1-0 up.

Smith came close to a second 10 minutes later as he arrived late into the box to latch onto a chipped cross, but his header flew just over the Wimbledon crossbar.

With just over an hour gone, Cosgrove should have equalised for the hosts as he turned smartly inside the box before firing into stands.

It was an all-action second half and only a goal-line clearance by Heneghan denied Smith at the second time of asking with his head, as he threw himself towards a deep cross and directed the ball back across goal, only to see it clawed off the line just in the nick of time.

It would be Smith’s final action of the match as he was soon replaced by Hoolahan before Tracey came on for Knibbs.

Aside from a turned-down penalty appeal with just under ten minutes remaining, the home side failed to turn the screw with what was left of the game, despite seven minutes of added time following a lengthy stoppage in play due to an injury to Cosgrove.

A huge three points for the U’s as they march onto 48 points and surely all-but secure their place in Sky Bet League One for next season. 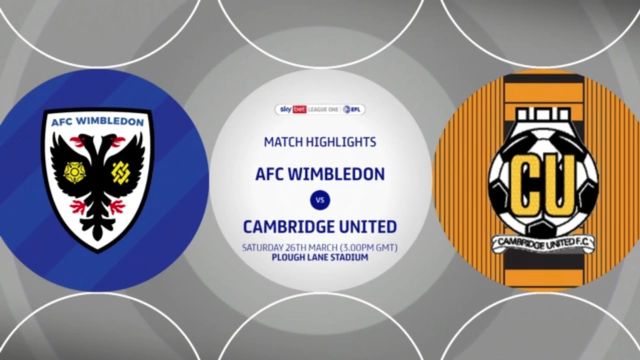 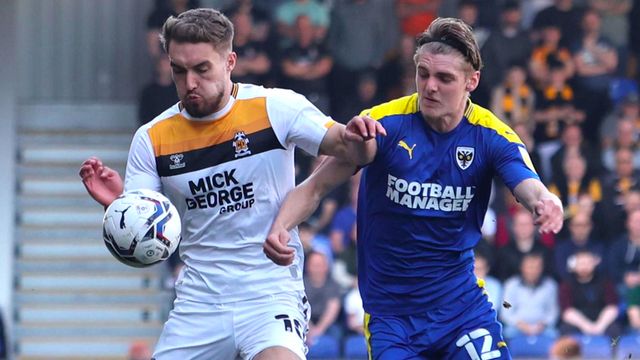