The U’s route to the Quarter-Finals

Having successfully navigated their way out of Group H (Southern) thanks to wins against Oxford United and Tottenham Hotspur U21’s, the U’s were rewarded with the home tie against Walsall in the Second Round.

Despite having to thank ‘keeper Kai McKenzie-Lyle for keeping the U’s in the game on several occasions - which later saw the Guyana international win Round Two ‘Player of the Round’ - goals from Sam Smith and Shilow Tracey either side of the half-time whistle were enough to see the U’s through to the Round of 16, where they would welcome Portsmouth to the Abbey Stadium.

Harvey Knibbs made it two accolades from two EFL Trophy knockout games when the Aston Villa academy graduate was presented with the Round of 16 ‘Player of the Round’ award following the forwards brace against Portsmouth at the start of January, setting Mark Bonner’s U’s up with a Quarter-Final tie against Rotherham.

The Miller’s route to the Quarter-Finals

The story could have so nearly been different for the South Yorkshire side, had it of not been for the penalty heroics of Viktor Johansson against Port Vale in the Second Round. Having seen the game finish all square at 1-1 after ninety minutes, the game was to be settled from the spot, with the Millers eventually running out 5-3 winners on the night.

Rotherham did manage to make easier work of it in the Round of 16, however, with Sadlier, Smith, Kayode and Ladapo all scoring in a 4-2 win over League One counterparts Crewe Alexandra at the start of January.

Rotherham will come as no strangers to the U’s, with both sides only clashing a month ago. Despite the U’s being well in the game mid-way through the second half, the Miller’s quality eventually shone through, with Daniel Barlaser excellently slotting home from the edge of the U’s area in the 66th minute.

Saturday’s hosts Rotherham boast the historical advantage over the U’s, having won 12 of the 26 games between the two sides, three better than United’s eight wins.

U’s Head Coach Mark Bonner appreciates the challenge his side will face on Tuesday night at the New York Stadium, “Rotherham are really strong and have now got everybody fit and available. Their home form has been brilliant, I think they’ve won eight out of their last nine home games in the last batch of games, despite having a couple of defeats in away games.”

Martin Coy has been appointed as referee for Tuesday night’s Papa John’s Trophy Quarter-Final between The U’s and Rotherham United at the New York Stadium.

He will be assisted by Conor Brown and Graeme Fyvie. The fourth official will be Andrew Kitchen.

If you can't make it to the game, stream the clash live on iFollow. Match Passes cost just £10 and are available to buy now. The simplest way to do so is by clicking here and selecting the Rotherham fixture.

However you choose to do so, get behind the U's once again this Tuesday.

Cambridge United’s six-game unbeaten run came to an end as they bowed out of the Papa John’s Trophy at the Quarter-Final stage with a shootout defeat to league rivals Rotherham United at the AESSEAL New York Stadium...

Wes Harding’s early strike was cancelled out by Paul Digby’s well-drilled finish – his first in United colours - on the cusp of half-time. Ultimately, the sides couldn’t be separated after a battling ninety minutes of football which concluded in the Millers advancing after holding their nerves from the penalty spot.

Mark Bonner rotated his side by making three changes from the XI that grinded out a dogged 1-0 win against Crewe Alexandra three days earlier – with cup ever-presents Liam Bennett, Jubril Okedina and Ben Worman returning to the fold. A youthful bench resulted in a squad containing eight academy graduates.

The U’s headed into the third meeting of the season between the sides allocated in 12th and in rampant form having collected five wins on the bounce – something they hadn’t achieved since their return to the Football League. In that run was a victory over Portsmouth, who they saw off in the previous round. On their best run in the competition since 2003, United would have their work cut out against the automatic promotion-chasing hosts. The Millers had enjoyed a barnstorming cup campaign thus far, plundering 20 goals as they thrashed Doncaster Rovers, Scunthorpe United and Manchester City’s U21’s in the Northern Group E before edging out Port Vale on penalties and overcoming Crewe Alexandra to set up tonight’s clash.

Put under a sustained amount of pressure from the get go, United were forced to dig deep. On the 2nd minute, a Tolaji Bola corner floated towards the head of Joshua Kayode who peeled away well but couldn’t generate the placement as it nestled wide of the crossbar.

Deadlock was broken on the 8th minute after a U’s defensive mishap was capitalised on by Will Grigg who scampered down the left flank and teed up Harding who picked his spot and drilled a first time attempt past Dimitar Mitov from the edge of the area.

A stubborn .defensive piece of play ensured the deficit wasn’t doubled just five minutes later when consecutive well-committed blocks in the six-yard box from George Williams, ushering in at centre-back for the first time this season, denied Kieran Sadlier and then Grigg’s fierce follow-up.

Another let-off for Bonner’s men occurred on 14 when a fierce Bola delivery fell straight to Kayode who couldn’t react and fire with his boot, instead hitting his thigh, as it prodded wide of the crossbar from six yards

After weathering a storm, the momentum switched as the visitors turned on the gas. On the 20th minute, good link-up play from Sam Smith and Adam May resulted in the midfielder unleashing an attempt from under 25 yards that whistled wide of Viktor Johansson’s right post, before Worman’s speculative curling effort from a similar position in the next attack found the target.

Enjoying more freedom in the final third, the boys in amber conjured up their best passage of play on the 27th minute when a driving run from Bennett caused problems for Bola, who turned his opposite number and firing a low attempt towards Johansson who palmed away. It was down the right particularly where they were finding space impeccably.

United took advantage of being on the front foot by latching home the leveller on the 39th minute. An excellent counter-attack concluded in James Brophy setting up captain Digby who struck with aplomb – the precision was too much for Johansson. Obtaining a knack of scoring at critical times of late, the CB5 outfit once again found themselves heading into the break with their tails up after a fruitful spell.

Determined to replicate a rampant start to the previous period, the Millers tested the gloves of Mitov within the opening seconds when Sadlier’s teasing corner was met by Kayode who headed down into the ground which ultimately reduced power.

Although the hosts were seeing more of the ball, they were yet to prove instrumental with it against a stubborn backline whose biggest strength possessed was on the counter. As the hour mark passed, they remained firm under pressure. Nonetheless, four like-for-like changes for the side in red would no doubt pose another challenging hurdle to overcome.

On the 70th minute, the ball fell invitingly to Jamie Lindsay from 25 yards who cannoned a ferocious attempt which, from first glance, may have been goal-bound if it wasn’t for a wicked deflection from a Rotherham man which resulted in a goal-kick.

A rare foray forward on 78 for the U’s concluded in an excruciatingly close opportunity. A delightful cross into the box from Harrison Dunk drifted towards May who beat Johansson in the air but couldn’t plant his header into the net as it went wide.

Substitute Mickel Miller’s whipped corner was a dangerous one to contend with on the 86th minute, getting audacious curl which left Mitov backpedalling, but the Bulgarian tipped it over the bar astutely to keep the scores level.

As the saying goes - if you can’t win it, don’t lose it. The visitors stuck to that mantra with collective defending as their battle-hardened performance resulted in penalties having to decide the teams in South Yorkshire.

In a penalty shootout for the ages, the first 13 penalties were all dispatched impeccably. In the 14th, Johansson met May’s with a dive to his left to bring a valiant run - their best since 2002/03 - to an end.

Up next, the U’s head up north to Highbury Stadium on Saturday (29th January) where they take on Fleetwood Town in search of a fourth consecutive league victory – a feat they last achieved in April 2021. 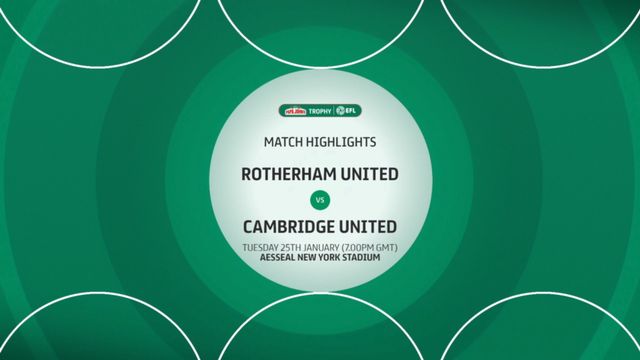 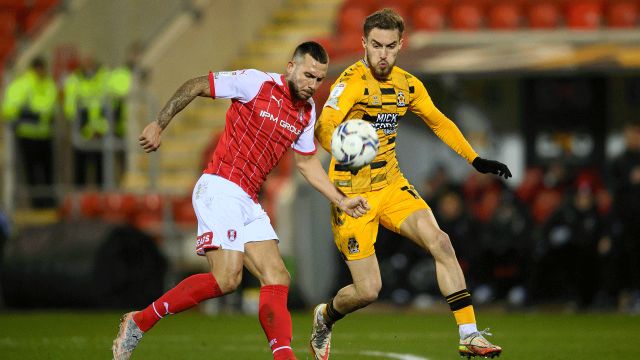