Following successive cup victories, attentions now turn back to League One as the U’s prepare for a trip to Lincoln City…

Harvey Knibbs’ second half brace made it two wins in two for the U’s, as well as setting up a final eight Papa John’s Trophy tie against Rotherham United on the 25th January (7pm).

The forward slotted into the bottom corner from the edge of the Pompey area five minutes after the restart before Wes Hoolahan excellently picked out the former Villain in the six-yard-box to double the U’s lead just nine minutes after. Michael Jacobs did pull a goal back for the visitors, setting up a tense finish, however United were able to hold out to preserve their 100% cup record while playing at the Abbey Stadium this season.

Prior to Tuesday’s outing, Mark Bonner’s men sealed a historic 1-0 win over Newcastle United in the U’s previous outing on Saturday, with Joe Ironside scoring the game’s only goal in the 52nd minute after Harvey Knibbs’ strike was saved, only for the ball to fall to the striker, who on the turn, fired home to send the 5,000 raiders from Cambridgeshire into raptures at St. James’ Park.

Saturday’s Sincil Bank clash will see the U’s return to League One action for the first time since Portsmouth and United played out an entertaining 0-0 draw on the turn of the new year.

Successive wins over Sunderland and Oxford United have eased growing relegation fears in Lincolnshire, however, Michael Appleton’s side sit just two points above the bottom four going into Saturday’s clash. Although – they boast a game in hand over sides around them.

Chris Maguire’s treble, against former club Sunderland, saw Michael Appleton’s Imps make it two wins in four days, having downed Oxford United thr weekend prior thanks to goals from Anthony Scully and new signing Morgan Whittaker either side of the half time whistle 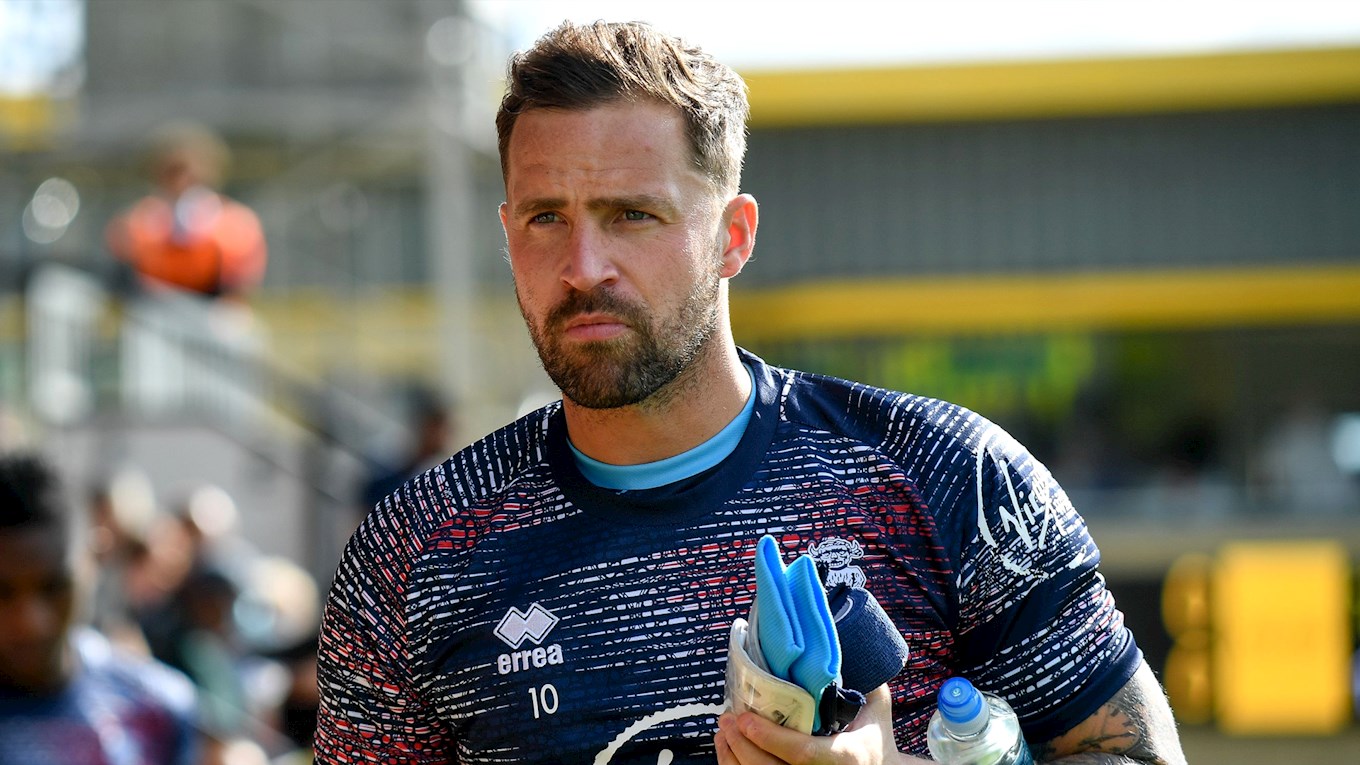 The forward, who has been deployed across the front three this season has contributed to four goals and two assists in the Imps’ last four outings in League One. Most recently scoring all three of Lincoln’s goals against former club Sunderland.

U’s fans will have certainly pushed memories of their side’s last outing against the Imps to the back of their mind, having witnessed United fall to a 5-1 defeat at the hands of Michael Appleton’s side, after Anthony Scully’s brace, coupled with goals from Hakeeb Adelakun, Conor McGrandles and Lewis Forini condemned the U’s to defeat at the Abbey Stadium at the start of September.

It’s certainly a tale of ‘less said the better’ when it comes to The U’s recent Football League history against Lincoln, with Saturday’s visitors boasting a 27-year unbeaten record against The Amber and Black Army in matched played in the top four tiers of English Football.

A crowd of just 2,472 attended a wintery Abbey in December 1995 to witness Tommy Taylor’s U’s last victory over Lincoln City. With Cambridge United only tasting victory over the last 50 years on eight of the 38 occasions both sides have battled it out.

Outside of the Football League, The U's have tasted victory against Lincoln as recently as 2013, where Luke Berry bagged in a 1-0 win for United en route to Conference promotion.

More recently, despite Jabo Ibrehe’s strike midway through the first half giving The U’s the lead, it wouldn’t prove to be enough as Neal Eardley and John Akinde responded to send Lincoln six-points clear at the top of League Two.

U’s Head Coach Mark Bonner believes Lincoln City’s current league position is a false one: “Their league position is probably a false one. We saw first-hand the level of quality within their team when they came to us earlier in the season, they have a lot of creativity and goals in their squad.

“They have had some injuries to key players, and on very few occasions have they been able to get their best eleven on the pitch, apart from our game!

“They have made a couple of good signings and are starting to look strong, they had two excellent results in the last two games against Oxford and Sunderland so, they are certainly going into this weekend in really good form.”

Andrew Kitchen will head up Tuesday’s clash at the Abbey Stadium, alongside Paul Graham and Mark Jones,who have been appointed as his assistants. David Hunt will watch from the side-lines as fourth official.

Advance tickets are now off sale for Saturday’s match at Lincoln City, with 600 tickets being sold. Matchday sales are card only from the visitor’s ticket window at the Club Store, where collections can also be picked up.

Cambridge United returned to Sky Bet League One action with a last-gasp 0-1 victory over Lincoln City at Sincil Bank...

Resilient goalkeeping and defending from the U’s helped survive a first-half onslaught. They improved significantly after the break, nonetheless, delivering when it mattered when Joe Ironside scrambled home in the dying embers to secure a vital three points for the on-song side.

Mark Bonner’s 100th game in charge of the club saw a rotation of the squad – with the Head Coach making five changes from the side that defeated Portsmouth in midweek. Sam Sherring, who joined the club on loan from AFC Bournemouth, was drafted in for his debut. Paul Digby, James Brophy, Ben Worman and Ironside also made returns.

The main objective for United was to use that momentum they’ve generated from cup clashes and convert that into points in the league as they seek to improve their form of the solitary win in their last eight in League One. It proved an excellent time to achieve that coup - with it being the first of five critical encounters against sides languishing near the relegation zone, including the bottom three in that block. For the Imps, they were situated a point and place ahead of the U’s thanks to impressive back-to-back league wins, the first time they’ve achieved the feat this season after a turgid seven-game winless run prior to that. An underwhelming 12 points from their 12 games at Sincil Bank was perhaps something to capitalise on, however.

In a real end-to-end opening to proceedings, both sides saw plenty of the ball in their respective final thirds. After Cohen Bramall’s lung-busting run and teasing cross was collected by Dimitar Mitov on the 7th minute, the U’s went up the other end and Adam May, who was frequently finding himself in the right positions, tested Josh Griffiths with a drilled attempt from under 25 yards which the youngster pawed wide.

On the front foot, the Imps conjured up a dangerous opportunity on the 22nd minute when neat movement down the left orchestrated by Bramall resulted in a shot on target from Liam Cullen who was prevented by Mitov’s firm save.

With half an hour played, Worman was dispossessed in the middle of the park - allowing Chris Maguire to scamper forwards and pull the trigger towards the U’s right post which was denied by an astute block from Sherring.

His centre-back partner Jack Iredale was called into action with a similar clearance minutes later when the ball fell into the path of an unmarked Anthony Scully from 12 yards whose precision was matched by the U’s number 3.

The barrage of pressure was certainly not at a premium for the hosts, who were forcing United’s rearguard to soak it all up. After 41 minutes, Maguire was released but from a one-on-one position the Scot was prevented poking it home by Mitov’s no-nonsense gathering.

Replicating heroics of last weekend, the Bulgarian was to the rescue again with an outstanding reflex save to deny the aforementioned striker from six yards on the cusp of half-time. It concluded a testing first 45 for the U’s with their backs to the wall, but they were definitely not out thanks to real grit and determination to ensure deadlock.

United had more of a foothold on the match as the second period progressed. Ironside had the ball in the back of the net on the 58th minute after the striker rifled home from distance - but the flag was raised for an offside decision.

Showing an assertive manner, Brophy found Sam Smith down the right who scurried into the box, picked his spot and cannoned a low shot into the gloves of Griffiths on 64. Moments passed and they had more freedom to roam when the provider hit a fierce attempt that sailed inches wide of the post.

Despite weathering a slight storm, the hosts carved out a strong chance after 75 minutes when, after receiving a pinpoint long ball, Scully played in Conor McGrandles deep down the left who fired towards the roof of the net which Mitov tipped over.

An immense last-ditch tackle from Iredale on 88 denied Morgan Whittaker’s mazy run as the Imps surged forward. This match still had drama on the cards.

After a scramble in the box, Griffiths made an outrageous save to deny May before Ironside scrambled home his 13thgoal of the season to cue pandemonium in front of the United faithful and wrap up a third win on the spin for the second time this season.

Be sure to back the U’s when they return to home soil on Tuesday evening (18th January) as they  Doncaster Rovers in their hunt to continue climbing the division. 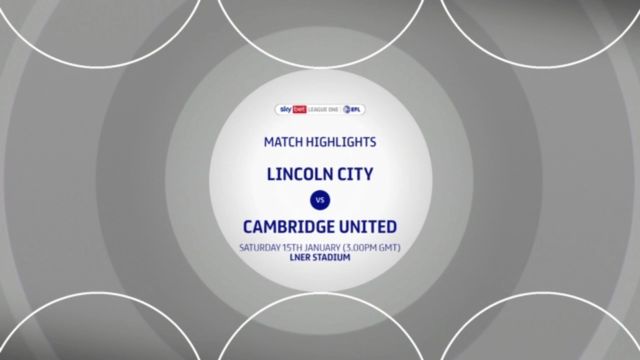 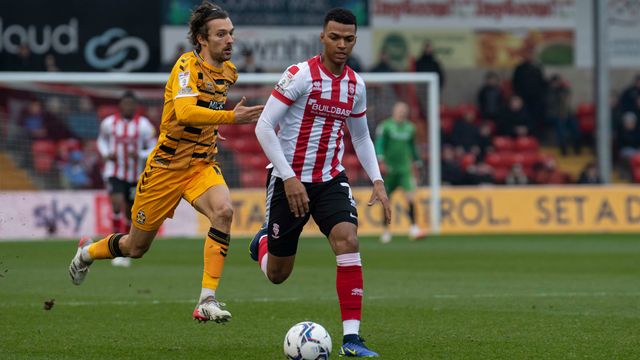