The U’s will be looking to make it two wins on the bounce on Tuesday night (22nd February), as they prepare to host play-off chasing Plymouth…

Mark Bonner’s side ended a run of five games without a win in all competitions on Saturday as Sam Smith and Wes Hoolahan were both on target to down Accrington Stanley. The game, which began rather cagey, opened up in the second-half as both United and Accrington went in search of a winner.

United spurned multiple good chances before Adam May’s edge of the area volley was saved into the path of Sam Smith to dispatch his 14th goal of the season from close range, before James Brophy played in Wes Hoolahan to seal the points in injury time.

Prior to Saturday’s win, despite falling behind twice in the game and looking like being condemned to a fourth straight defeat, United battled back well against Burton Albion through Harvey Knibbs in the first half and later Sam Smith after 72 minutes to leave Staffordshire with a point.

Steven Schumacher, undertaking his first permanent role as Head Coach following the departure of Ryan Lowe in December, looks to be continuing the good work started by his predecessor, with the Pilgrims heading to Cambridgeshire on Tuesday night having won four on the bounce in League One – with only European and newly crowned World Champions Chelsea inflicting defeat on Schumacher’s side after extra-time in their previous six outings in all competitions.

Jordan Garrick and Luke Jephcott set the Pilgrims up in good stead heading into Tuesday’s game following Plymouth’s 2-0 win over Gillingham on Saturday – an even more impressive win over the relegation threatened side given the Greens limited Neil Harris’ side to just two shots throughout the entire 90 minutes.

Conor Grant scored his sixth goal of the season in the Pilgrim’s 1-0 win over Shrewsbury Town last weekend. The win, that made it three on the spin in the third tier, saw Plymouth move back into Play-off contention following Oxford United’s defeat against Bolton.

United's history with Plymouth dates back to 1974, as a 4-1 Division Three loss saw the U's get off to a rough start in the 1974/75 season. A 3-1 win in the reverse fixture however did help address the balance and across all meetings, it is the U’s who have the edge with 11 wins, 9 draws and 9 losses.

August’s meeting, a 1-1 draw at Home Park whereby Joe Ironside’s penalty cancelled out Luke Jephcott’s opener, saw both sides meet in the third tier of English football for the first time since 1994/95. Both games that season ended in a draw, which didn't do much to help either team, as both were relegated come the end of the season.

The last time the U’s entertained Plymouth at the Abbey was back in 2019, with Kyle Knoyle’s goal proving to be decisive as Colin Calderwood’s side ran out 1-0 winners on the day. The result sparked a run in which saw the Pilgrims pick up 12 wins in 18 before March (and the eventual end of the season due to Covid-19) – with Ryan Lowe’s side eventually being promoted by virtue of points-per-game.

“Plymouth are in incredible form. Steven’s [Schumacher] done a brilliant job since he's taken over from Ryan Lowe after he moved on to Preston. He's continued the good progress that they have been making this season.

“We saw first-hand how difficult games can be against them when we went there earlier in the season. We know what to expect, but whether we can control and contain that and then cause them our own problems will be key for us.”

Robert Madley has been appointed as referee for Tuesday night’s Sky Bet League One clash between The U’s and Plymouth Argyle at the Abbey Stadium.

He will be assisted by Conor Farrell and Michael Chard. The fourth official will be David Rock.

If you can't make it to the game, stream the clash live on iFollow. Match Passes cost just £10 and are available to buy now. The simplest way to do so is by clicking here and selecting the Plymouth fixture.

Cambridge United recorded a fourth consecutive Sky Bet League One win at the Abbey Stadium with a commendable 2-0 victory over Plymouth Argyle...

A devastating first-half from the U’s saw Sam Smith chip home his 15th goal of the season and Jack Lankester open his account. The character was matched after the break as the hosts looked excellent value for maximum points as their league ranking continues to prove fruitful.

Head Coach Mark Bonner shuffled his pack by making three changes to the side that picked up a resilient win against Accrington Stanley three days earlier. Slight knocks within the XI paved the way for Liam O’Neil and Jack Lankester to return to the fold, whereas Liam Bennett made his first league start. Shilow Tracey made for a welcoming addition to the bench after recovering from an injury picked up in early-December and Saleem Akanbi’s impressive campaign for the U18’s was rewarded.

Heading into the encounter under the floodlights, the U’s essentially had very little to fear after more than stabilising themselves as part of the mid-table pack thanks to a commendable form of two losses in their last nine league games. A testing clash awaited against play-off occupying Plymouth, whose stubborn system has formed a well-drilled side blessed with energy and attacking prowess – scoring in 15 consecutive games and seeking a fifth win in a row.

United kickstarted the clash in rampant fashion by drawing first blood after just 5 minutes. A long ball from Bennett evaded the Pilgrims defence, looping into the path of Smith who beat a racing Michael Cooper and showed composure by lobbing the ball into an empty net for his third goal in successive games.

Chomping at the bit, the U’s went agonisingly close to extending their lead seconds later when Cooper kept out Smith’s attempt, forcing the ball to be recycled around the six-yard box before Lankester curled an audacious shot that the goalkeeper pawed immensely.

Although the clear cut chances dried up, the hosts continued to camp their opposite number in their own half, forcing slight defensive mishaps thanks to their tenacious approach. When Steven Schumacher’s men did make forays into a dangerous position, they were continuously denied by no-nonsense defending from United’s centre-backs.

The Pilgrims were carved open on the 27th minute when James Brophy beat his man and drilled a through ball to Smith who marauded forwards in a one-on-one position but, due to severe pressure from James Bolton, the top scorer was off balance and struck towards an imposing Cooper.

After 36 minutes, Plymouth conjured up a scare when Conor Grant’s sharp delivery down the left was pinpoint for Niall Ennis, but the striker got his angles wrong. Ultimately, the U’s were soaking up pressure well and looked threatening on the break – a combination which had been devastating.

The advantage was deservedly increased on the 41st minute, perhaps under controversial circumstances, when Grant was barged off the ball from Lankester. Despite the protests, the summer signing was already wheeling away after he poked home with assurance from 10 yards.

On the stroke of half-time, sublime link-up from Lankester and Smith resulted in the latter nestling home with an audacious shot from the outside of his boot – frustratingly, the ticket to dreamland was ruled out for offside. Nonetheless, it had culminated arguably their best first-half of football all season.

Three minutes after the break, Smith was released again and in industrious fashion raced towards the box but Bolton got a foot in and Cooper cleared up the danger with a diving save – it was just the start Bonner would have stressed.

A dangerous cross from Brophy on the 52nd minute created pinball in the six-yard box, resulting in Sam Sherring stabbing towards goal which Macaulay Gillesphey cleared in the nick of time with a critical block.

Understandably, the Pilgrims needed to go gung ho to bring back a point or three to Devon, unleashing double-digit goalscorer in Ryan Hardie. But as the clock ticked past its hour mark, there was no breaching the U’s who remained firm and kept ensuring the lead didn’t turn slender.

On the 75th minute, the inspired Paul Digby marshalled a mighty scramble in the box as Steven Sessegnon powered towards goal and Hardie battled to it.

Ennis provided a test on 83 with an acrobatic attempt - although it wasn’t too fierce, a deflection looped it towards the roof of the net. The resulting inswinging corner from Adam Randell was floating in but Dimitar Mitov leaped to place it over the crossbar.

Tracey applied the afterburners on the 88th minute – a rampaging run down the left caused havoc, before he tapped towards goal but Cooper denied it.

Ultimately, the icing was already on top of the cake. A stubborn, yet free-flowing performance, resulted in three thoroughly-deserved points as United retained their impressive feat of not losing a league game after taking the lead - coconuts beckoned.

The U’s hit the road again on Saturday (26th February) when they take on play-off chasing Oxford United at the Kassam Stadium. Be sure to back the boys in their hunt for a third success on the bounce.

Man of the Match: Bennett 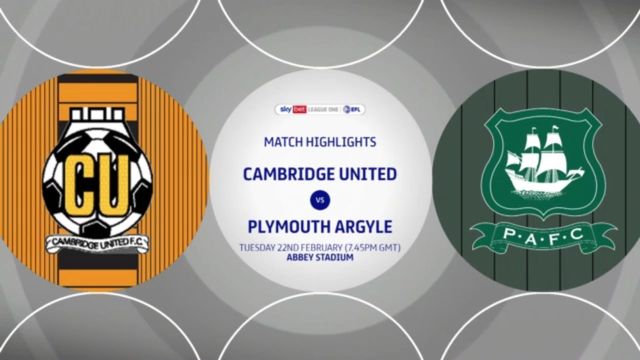 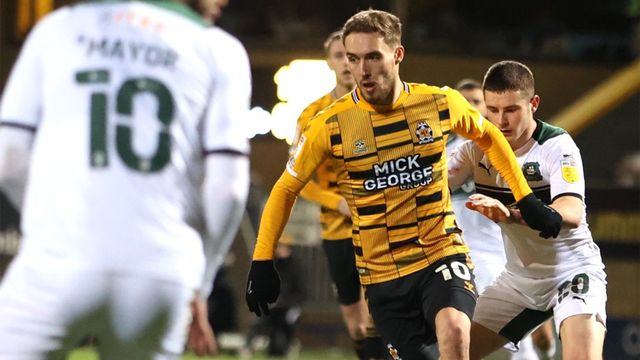