Ten-man Cambridge United concluded their travels for the Sky Bet League One campaign with a relentless 5-1 defeat over play-off chasing Sunderland at the Stadium of Light...

In the largest league crowd the U’s had played under since the turn of the millennium, a controversial red card for Lloyd Jones in the opening moments set the tone for a strenuous afternoon where Ross Stewart got the ball rolling from the penalty spot. Although Paul Digby immediately cancelled out Elliot Embleton’s sublime free-kick, Stewart grabbed his brace shortly after to conclude a demanding first-half. The Black Cats made the most of their healthy advantage after the break through Nathan Broadhead and Danny Batth headers to shatter United’s impressive away form.

Injecting fresh legs into the squad once more, Mark Bonner rotated his side by making seven changes from the one that fell to defeat against Charlton Athletic in midweek – with only Lloyd Jones, Jubril Okedina, Jack Iredale and Sam Smith keeping their place.

One of the form sides in the division and looking to soar into the play-offs, you wouldn’t have put it past the hosts achieving that feat owing to their 10-game unbeaten run which had consisted of four consecutive wins on home soil. On the contrary, the U’s had recorded three successive victories on the road for the first time since March 2017, helping to establish their top-half hopes as they once again aimed to thrive on the big occasion.

Just after finding their feet, United were dealt a mountain to climb on the 10th minute when they were reduced to ten men and conceded a penalty. After Nathan Broadhead capitalised on some confusion within the visiting backline, he brought down a high ball and raced inside the penalty area before colliding with Lloyd Jones who, harshly, received his marching orders due to a last-man tussle. Stewart stepped up from the spot and dispatched a drilled attempt in the bottom corner.

Very much in the ascendency, the Black Cats poured forwards continuously in an attempt to extend an already-healthy cushion. An exquisite pass into the path of Patrick Roberts on 21 allowed the former Manchester City player to fire from 10 yards which was denied by an important stop from Dimitar Mitov.

Two minutes later, a jinking run from Embleton saw him beat several men down the left before curling an audacious shot from some angle which flew inches wide.

Understandably, one-way traffic ensued. United’s backline was breached on the 28th minute through livewire Embleton whose audacious free-kick deep down the left sailed with precision into the roof of the net despite Mitov’s best attempts to paw it wide.

In response, the U’s marauded down the other end and grabbed a goal back instantly to restore hope. After the hosts failed to clear Sam Smith’s delivery, Digby popped up to volley past a helpless Anthony Patterson from inside the six-yard box. With it being their first shot of the game, they showcased their clinical side but knew it would need to be replicated again.

Stewart was celebrating his brace on the 35th minute when Lynden Gooch’s cross down the right was touched down delicately from the number 14 with his back to goal before turning and nestling a venomous attempt home to restore the two-goal advantage.

Alex Neil’s side conjured up chances to grab a fourth before the break, with the aforementioned striker heading wide before Mitov kept the scoreline down by denying Callum Doyle. The U’s had been through the gears in a relentless opening half.

The game was put to bed seven minutes into the second period when Gooch, who had been extremely effective down the right for the hosts, picked out the head of Broadhead with a pinpoint cross who thundered home from yards.

Although United had found time in the final third limited within the encounter, they did generate the next big chance on the 65th minute when George Williams worked the ball towards Okedina who, from eight yards, couldn’t angle his shot goalwards as it zipped over the crossbar.

Moments later, the Black Cats broke again in their favoured wing and crossed towards substitute Alex Pritchard whose tricky header was cleared before the danger was diminished.

Sunderland grabbed their fifth of the afternoon on 70 when Roberts’ excellent cross completely evaded the U’s backline who couldn’t react quicker than Batth who popped up at the back post to guide home with his head.

The side in red and white had been dominant in the air and their crosses had been menacing. This was shown again on the 82nd minute when Gooch floated a ball to Luke O’Nien who headed alone from a matter of yards which Mitov dealt with. It was the last action of a demanding clash, but one the side will take as a lesson with something to gain from.

The U’s conclude their first season back in the third tier next Saturday (30th April) as they take on Cheltenham Town at the Abbey Stadium. Be sure to back the boys as they aim to round off an applaudable season with a top-half finish. 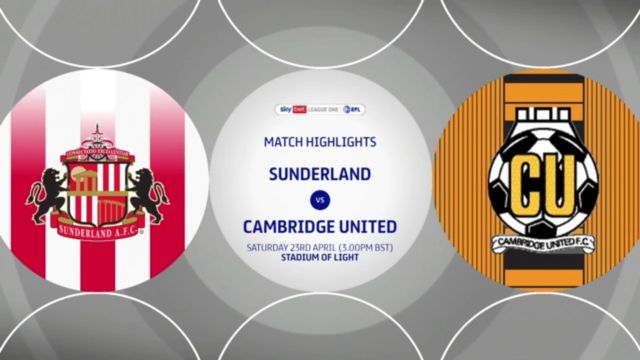 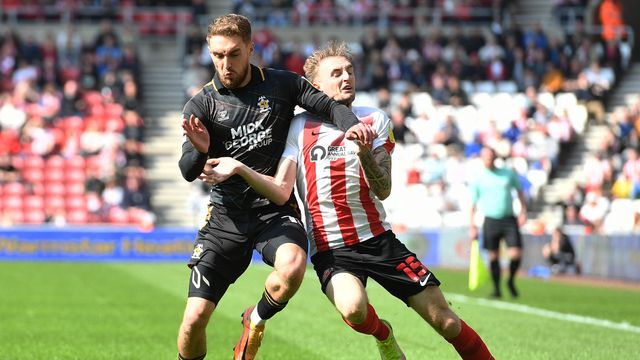