Cambridge United’s five game unbeaten run in Sky Bet League Two was ended with a 1-4 defeat at the hands of Exeter City at the Abbey Stadium.

First-half strikes from Ryan Bowman and Jack Sparkes put the Grecians in the driving seat. Despite a positive start to the second half, where Joe Ironside gave the hosts a lifeline, further goals from Archie Collins and Matt Jay killed the game off to see an end to United’s five-match unbeaten run.

Mark Bonner made just the solitary change to the side that earned a battling 1-1 draw against Tranmere Rovers on Easter Monday. Wes Hoolahan was brought back into the fold, replacing Luke Hannant who dropped to the bench.

An attacking encounter was promised from the get go between the division’s highest scorers (60), when United conjured up the first opportunity of the game in the opening minutes. A string of passes down the left flank resulted in a deep Hiram Boateng cross which was met by Ironside who climbed extremely well but was denied by the reflexes of Jokull Andresson.

The Grecians made their first foray into the final third count on the 3rd minute when they took an early lead. Jake Taylor drove into space down the right and picked out Bowman central in the area, whose firm header clattered Callum Burton’s right post and trickled in.

Just as the U’s were starting to generate some attacking momentum, they were dealt a further setback when City increased their advantage on the 15th minute. Sparkes was allowed the space to pick his spot and unleash a low piledriver from 25 yards into the side netting after Burton got his hand to it.

In need of a response, a delicate Hoolahan cross was met by Paul Mullin at the front post on the 25th minute, but the striker had to stretch and couldn’t direct it home from an awkward angle.

Nonetheless, United were seeing more of the ball and did look controlled in possession. A marauding run forward from Kyle Knoyle kept the Grecians’ backline on their toes, but the attempt from 20 yards was blazed wide.

The last of the hosts’ first half chances fell Hoolahan’s way from a close-range free kick on the 35th minute. The attempt got plenty of curl and caught out Andresson, but dropped the wrong side of the post.

Overall, it left United with plenty to do in the second half if they wanted to claw back the affair, who were on the receiving end of a professional Exeter City performance.

The response after the interval was excellent, with the U’s halving the deficit on the 54th minute. A pinpoint ball from Boateng deep down the left found a looming Ironside at the back post who stabbed home his 12th of the campaign.

With their tails up and peppering the Grecians’ goalmouth at every attack, United almost grabbed an equaliser on the hour mark. An applaudable passing move was executed straight to an unmarked Boateng in the box, with the midfielder cannoning his attempt against the side netting.

Despite the momentum, Bonner’s men were dealt another sucker punch on 67 when the visitors scrambled home their third of the afternoon. Josh Key raced into a dangerous area on the break and squared it to Collins who, in what felt like slow motion, poked home despite endeavour from Burton to claw it away.

The game was killed off on the 79th minute when a crisp pass from substitute Nigel Atangana found Jay, who grabbed his 19th of the season by finishing astutely.

An off day for the U’s, but they’ll be adamant for an instant response on Saturday (17th April), when they travel to Rodney Parade to take on fellow promotion-chasers Newport County. 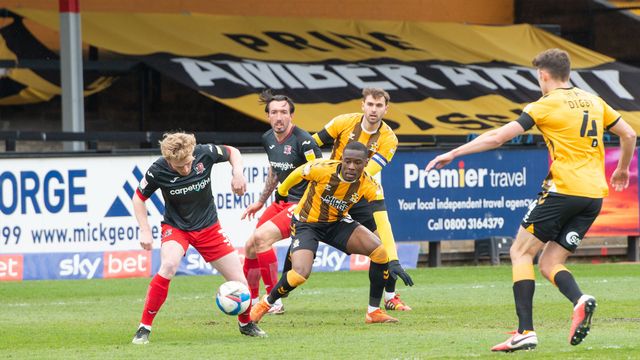