Cambridge United bowed out of the Checkatrade Trophy with a 0-2 defeat, in the first competitive derby against local rivals Peterborough United for 16 years.

Despite a battling performance from the U’s, Jack Marriott set up Steven Taylor after half time before bagging a goal himself to knock the U’s out of the competition.

The U’s made three changes with Dimitar Mitov, Medy Elito and Paul Lewis returning to the starting eleven.

Under tricky conditions both sides enjoyed spells on the ball in the early stages, but it was the U’s who came closest first when Paul Lewis threw himself on to the end of a shot by Uche Ikpeazu and side footed an effort across the face of goal.

Posh tested Dimitar Mitov midway through the half when Marriott’s mid-range effort forced the Bulgarian to palm away into the path of the offside Anthony Grant who fired wide.

However, it was Conor O’Malley who was the busier of the two shot stoppers in the opening 45 minutes, tipping over a powerful Paul Lewis drive and clawing a Greg Taylor shot off the line moments before the break.

Mitov looked to have kept the unblemished score line intact when he dived down to parry Michael Doughty’s shot in the 49th minute, but Jack Marriott followed up and slid the ball across to Steven Taylor to tap into an empty net.

United rallied well as they looked for a response, substitute Harrison Dunk’s cross come shot fizzed agonisingly past the outstretched Ibehre, minute before Ikpeazu’s header from eight yards out saw O’Malley produce a stunning reaction save

However, Jack Marriott sealed the victory for the visitors when he travelled with possession into the United area and found the bottom corner to complete a 0-2 score line.

For the first time in 16 years, it is Derby Day at the Cambs Glass Stadium!

Kicking off at 7:45pm tonight, tickets for Cambridge United’s clash with local rivals Peterborough Unite can still be purchased online here or from the ticket office windows right up to kick off.

Peterborough United are expected to sell out the South Stand at Tuesday’s Derby, so the U’s need your support Amber Army! The Club is urging fans to get behind the U’s to give them the biggest home advantage possible in what is sure to be a feisty and unmissable encounter. 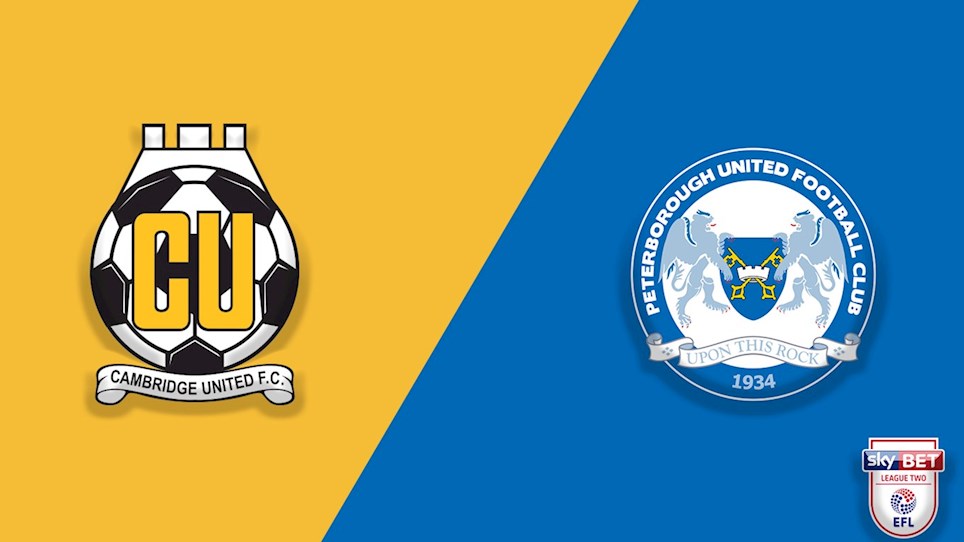 
Derby Day is almost upon us! U’s fans are reminded the game against Peterborough United kicks off at 7:45pm at the Cambs Glass Stadium, with tickets available online and in-store now!

DERBY DAY | POSH EXPECTED TO SELL OUT AWAY END


Peterborough United are expected to sell out the South Stand at Tuesday’s Derby…The U’s need your support Amber Army!


Cambridge United face local rivals Peterborough United for the first time in over 15 years at the Cambs Glass Stadium on Tuesday 7th November, with tickets available online, in-store and over the...