Cambridge United came away with a point from their trip to the Globe Arena, with Dimitar Mitov keeping a clean sheet on League debut in a scoreless draw with Morecambe.

United lined up with four changes to the side who defeated Cheltenham at the Abbey three days earlier, with Uche Ikpeazu, David Amoo and Harrison Dunk returning to the starting eleven and Mitov making his first League outing for the U’s.

The Bulgarian keeper was called into action inside ten minutes when dropping low to his right to palm away Callum Lang’s shot one on one, in what proved to be his only involvement of the first half.

United enjoyed a sustained spell of possession as the opening 45 minutes crossed the midway point, but never really tested Shrimps keeper Barry Roche. In fact the host’s shot stopper was only really called into action to punch clear a number of U’s corner deliveries and catch a fizzing shot from George Maris on 28 minutes.

However, United moved the ball about well particularly when being pressed by the Shrimps to control long periods of play, something that featured throughout the evening.

The pattern of the game continued in similar fashion after the break. The U’s were presented their first opportunity of the half on the hour mark when the ball bobbled into the path of Jevani Brown on the edge of the Shrimps area following a tackle on Ikpeazu, which the midfielder curled narrowly over.

A hat trick of corners in quick succession soon after for the U’s almost lead to an opening for Ikpeazu, with George Maris’ cross falling behind the striker who manged to dig out at shot that grazed the outside of the netting.

At the other end, Kevin Ellison spurned a clear sight on goal, when directing Adam Campbell’s pass into the U’s 18 yard box well wide of Dimi Mitov’s goal.

Maris came close to another peach on 71 minutes, as the midfielder curled a fine effort towards the far corner from 25 yards, only for the strike to drop the wrong side of the post.

As the game opened up, the hosts who were in need of as many points as they could get to ensure their League Two status remained safe, pushed forward in search of winner. However, United looked good on the counter attack particularly in the closing stages, with Jake Carroll overlapping substitute Billy Waters before firing over in the U’s final chance.

The final opportunity fell to Callum Lang, who managed to make contact with a Michael Rose whipped delivery, but it bounced off the hip of the Shrimps man and off target, which meant the scoreline remained unblemished.

Joe Dunne’s side are looking to pick up their third successive win in the League and continue their positive run towards the closing stages of the season.

Tickets are available to purchase on the night from the Globe Arena, with away travel also available, call 01223 566 500 for more information.

Ticket prices have been reduced for the re-arranged fixture by the Shrimps and are priced as follows: 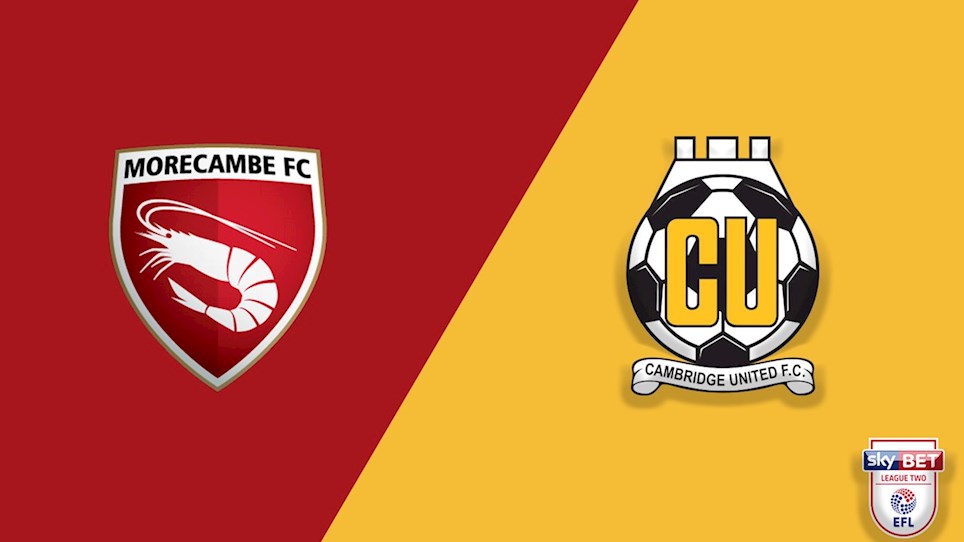