Mark Bonner’s men sit in 20th following the solitary win in nine and have endured a sticky patch in front of goal, whereas the hosts are rooted to the bottom of the table and are winless in seven. With six points separating the sides, the U’s are out to increase the gap and raise spirits.

Just under 250 tickets have been snatched up ahead of the tie in Nailsworth, which now kicks off at the earlier time of 1:00pm. Supporters who wish to join us can buy their tickets for the match online at cufctickets.com or over the phone by calling 01223 566500. Supporters will be allocated four away credits for this fixture.

Fans who are unable to make the game will be able to stream the game live with an iFollow Match Pass. Passes cost £10 and are available to purchase by clicking here. Alternatively, you can follow live match updates on the day through United’s social media channels.

A well-documented, forward-thinking club, Forest Green Rovers enjoy sustainability, but continue to push the boundaries environmentally and on the pitch following two quick promotions under Mark Cooper in 2016/17 and the respected Rob Edwards in 2021/22. Owner Dale Vince is adamant the side will complete a treble and ply their trade in the Championship one day, but for now, Ian Burchnall’s group need to dig in and grind out results.

Rovers’ curtain raiser resulted in a last-gasp victory at happy hunting ground Bristol Rovers, before Ipswich Town edged them out next and Connor Wickham rescued a point against Lincoln City – overall, an intriguing start. However, three successive losses followed, where they conceded ten without reply. Fortunes changed slightly, as they secured a first win at the New Lawn and shared the spoils at Charlton Athletic. Another hat-trick of defeats dampened spirits, but a stubborn win against strong-starters Bolton Wanderers raised hopes. Frustratingly, that was the last time they tasted victory – they’re since winless in seven, drawing three in that time. Although they’re rooted to the bottom of the table, all four in the drop zone have obtained 14 points, six points behind the U’s.

Following a summer of transformation following the loss of key figures, Jordan Moore-Taylor remains at the heart of a three-man defence, whereas Corey O’Keeffe supplies excellent ammunition in the wing-back spot which was vital to last season’s success. Brentford loanee Myles-Peart Harris has already amassed 20 appearances behind the vastly-experienced Wickham, whilst fellow target man Jamille Matt has always proven a handful when fit.

United crashed out of the Emirates FA Cup at the Second Round stage in their last outing as lower-league Grimsby Town picked up a last-gasp 1-2 success.

Falling to the small banana skin, the Mariners ultimately deserved their victory. Otis Khan capitalised on growing pressure, but although the U’s looked in control of the encounter after Sam Smith equalised, a mishap in the middle of the park allowed Khan to secure the win near the death.

Following the defeat, the Head Coach acknowledged that, stating: “At 1-1, I thought we were going to drive on and win the game but we didn’t create enough moments and then conceded the easiest goal they’ll score all season.”

The current form, which has now stretched to two wins in 13 in all competitions, has understandably caused frustration and worry within the fanbase, but the fact that full focus can now be on the league may put the team in good stead going into the Christmas period.

That starts on Saturday, as United hit the road for the first time in almost a month. Against another side desperate for points, a potentially cagey matchup awaits, but this side always relish a challenge.

In regards to team news for Saturday, Zeno Ibsen Rossi has returned to training and will be available for selection, with everybody else fit and ready bar the longer-term absentees.

Although this may be the first ever meeting between the sides in the third tier of English football, they’ve pitted their wits against each other numerous times in Sky Bet League Two and primarily in non-league.

Last time out, the U’s picked up a pivotal three points towards their promotion pursuit in March 2021 when, in a scintillating first half, a moment of magic from Wes Hoolahan proved the difference at the Abbey.

Speaking on that day, Bonner heaped the praise, stating: “I thought we were brilliant. Real energy and intensity, good pressing, used the ball well and caused them lots of problems.”

Before that, Rovers had won five on the bounce against United and were undoubtedly a real bogey team following their promotion to the Football League. In April 2019, a win in Nailsworth assured at least a place in the play-offs for the hosts, but results elsewhere confirmed safety for the U’s. Paul Digby scored just the solitary goal during his stint at our opponents – funnily enough, it came against the men in amber in the reverse fixture.

In a less-chaotic first half, Josh March headed home the opener from close-range. The U’s struggled to find a foothold from here, but did conclude a sweet passage of play moments from time when Saikou Janneh lashed in his first goal for the club. Just when a point apiece looked destined, Rovers - who saw defender Corey O’Keeffe see red in the build-up - converted a penalty through Connor Wickham to seal success in Nailsworth.

Going into the vital encounter, the U’s sat in 20th position following the solitary win in nine, with six points separating them and the hosts, who were rooted to the bottom of the table following a winless run of seven in the league.

Out to increase the gap and raise spirits, Mark Bonner made just the one change from the Emirates FA Cup defeat to Grimsby Town a week earlier as Ben Worman made his first league start of the season as Lewis Simper made way.

Within the opening minutes, the hosts looked the more determined to start on the front foot and force an early goal, keeping Will Mannion alert - who made two simple saves from Ben Stevenson’s and Myles Peart-Harris’ attempts at goal

On the 9th minute, Worman’s corner caused a mighty scramble in the six-yard box. Despite endeavour, no man in light blue could get their boot out to poke home and capitalise from pinball as Rovers eventually cleared their lines.

Growing into the game astutely, great pressing from Worman moments later allowed him to nick the ball off Dylan McGeouch 20 yards from goal before the midfielder pulled the trigger which lashed just wide of Luke McGee’s right post.

Industrious, United continued to pressurise Ian Birchnall’s side with their abundance of pace. On 23, James Brophy marauded into the far corner of the area, attempted a delicate shot which deflected off McGee and towards Joe Ironside who, with his back to goal, took a touch and went to clatter at goal in Newcastle-esque fashion before it was smuggled away well.

On the half an hour mark, a slight defensive mishap from the U’s allowed a tee up for McGeouch from inside the box whose venomous effort was critically blocked by the recovering George Williams.

United were undone on the 36th minute when McGeouch cut inside slightly down the left and picked out the unchallenged March with a sublime cross who guided his header home from a matter of yards, leaving Mannion rooted to the spot.

The goal visibly dampened the spirits of the visitors, who certainly had their chances, but Forest Green had continued to threaten in possession and would feel they were good value going into the break.

On 52, a corner was crafted following Ironside’s cross, which resulted in the ball falling invitingly to Jubril Okedina on the edge of the box whose shot went high and wide.

In a dogged start to the second half, very little action and opportunities were on show as the hosts looked keep their foothold. Requiring urgency, Sam Smith and Jack Lankester entered the fold with an hour on the clock.

A lofted ball from Okedina on 73 found Smith in a central position who raced onto it but couldn’t obtain the killer touch on the falling ball otherwise he would have been able to get a shot away from ten yards.

The closest chance of the half fell to the Peart-Harris five minutes from added time after the youngster picked his spot from over 20 yards which clattered just over Mannion’s crossbar. Seeing out the game in a professional manner, Rovers proceeded to bring on the experienced Jamille Matt to partner fellow substitute Wickham.

Just when defeat looked imminent, the U’s conjured up an unlikely equaliser in the 88th minute when Lankester and Lankester combined with a silky move before pulling back to Janneh who executed a drilled attempt past McGee – his first for the club and at a crucial time.

A matter of seconds after the restart, United were dealt an insufferable blow when Peart-Harris was fouled inside the box. Protests ensued, which resulted in Rovers defender O’Keeffe receiving his marching orders before Wickham dispatched the late penalty under Mannion.

Nine minutes into the five stoppage, goalkeeper Mannion popped up with a fierce header from a corner but was denied by the reflexes of McGee. The rollercoaster ended here as Bonner’s men yet again saw a share of the spoils snatched from them at the death.

Up next, the U’s honour long-servant Greg Taylor with his testimonial match on Tuesday evening (6th December) as they pit their wits against his boyhood team West Ham United at the Abbey Stadium – please consider buying a ticket to show your support. 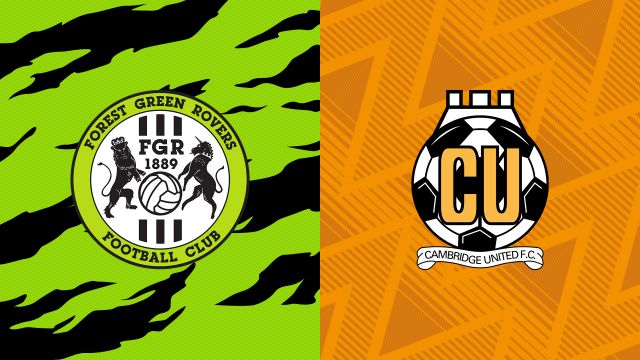 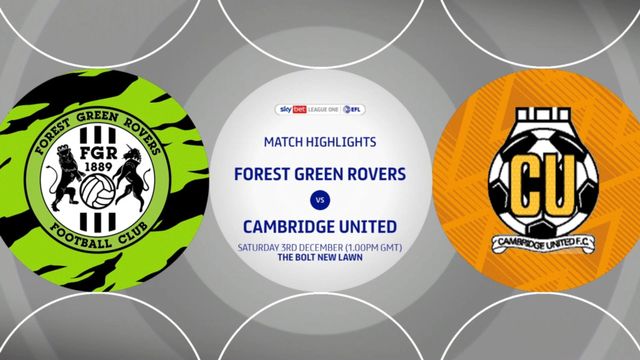 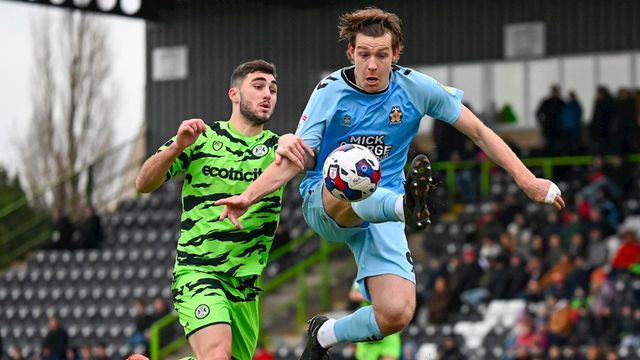