Cambridge United look to round off 2022 with back-to-back Sky Bet League One victories when they make their first visit to Pride Park on Friday evening to take on play-off chasing Derby County...

In front of a bumper crowd, the U’s are out to build on two impressive results and climb from their current 19th position, but know a tricky test awaits in the Rams, who are nine unbeaten under Paul Warne and eager to solidify their ranking in the top six.

900 tickets have now been sold ahead of Friday evening’s match, which kicks off at 7:45pm. Join the sea of amber by securing your place online at cufctickets.com – advance sales last until 9:00pm on 28th December.

Please note, this is an all-ticket fixture, so please book your seat in advance and collect either at the club shop on Thursday morning or at Derby on the day of the game. Supporters will be allocated two credits for this tie.

Fans who are unable to make the game will be able to stream the game live with an iFollow Match Pass. Passes cost £10 and are available to purchase by clicking here.

14 consecutive campaigns in the second tier of English football came to a halt this year as financial turmoil forced Derby to bow out after real adversity. Now, in what is their first season in this division since 1986, our opponents ideally want this to be a short stint as they aim to rise and recapture former glory days. Under the tutelage of Paul Warne, a man who has gained promotion from this level three times, there’s nobody in the business more suited to the role.

In the land of former giants, the Rams have enjoyed a satisfactory first half of the season, albeit their chances of clawing an automatic promotion spot looks a mighty task now. Derby’s start to 2022/23 saw them register the solitary loss in their opening six, coming against Charlton Athletic, but did beat fellow newcomers Barnsley and Peterborough United. Back-to-back losses and victories followed, before they dispatched Accrington Stanley 0-3 either side of defeats to Port Vale and Ipswich Town. Over two months on, they’re yet to taste defeat and are currently in the midst of a nine-game unbeaten run, although six of those have been draws - including last time out when they shared a stalemate with Bolton Wanderers on Tuesday. Conceding just once in their previous five, County sit in 6th, and with five points separating 4th and 9th, it’s all to play for.

Boasting the perfect blend of experienced heads and rising starlets, Warne has a stubborn defence at his disposal with a determined attack who all have proved themselves in higher divisions. Joe Wildsmith has already registered double digits for clean sheets, while injuries to leaders Curtis Davies and James Chester has not sparked worry due to long-serving Craig Forsyth and emerging talent Eiran Cashin’s steady performances. Louie Sibley, Max Bird and Jason Knight are all ever-presents despite being in their early 20s, with Conor Hourihane pulling the strings from the middle of the park. In the attacking department, James Collins and David McGoldrick, with the latter possibly returning to action against the U’s, are physically imposing, link up play well and, importantly, can win games with their composure in front of goal.

The U’s approach their clash in Derbyshire in an optimistic manner, rightfully fancying their chances of causing a shock following a long-awaited victory on Boxing Day – coming from behind to tame Shrewsbury Town 2-1.

A game of two halves in terms of entertainment, the U’s nullified Steve Cotterill’s side in the first but couldn’t break down a tricky defence at the other end. Once Christian Saydee drilled home the opener just after the hour mark, the men in blue hit back with Shilow Tracey’s sublime curler before Sam Smith secured the quickfire turnaround ten minutes later, to hand them their first league goals, and win, at CB5 since early September.

Delighted with his sides ability to overcome recent obstacles to claw a first win in six, Bonner revealed, “I’m really pleased with the effort of the players and the character they’ve shown. We’ve done enough to win, in what was at times a scruffy horrible game. Between games the lads have put some brilliant work in, so it gives us a little boost of confidence that we need.”

For a brief period on Monday afternoon, the U’s were languishing in the relegation zone. Fortunately, they’re now in a healthier 19th with a three-point gap that they’ll be desperate to increase. After cancelling out the pace-setters and frustrating one of League One’s meanest defence, United know they’re more than capable against the heavyweights.

In regards to injury news ahead of the quick turnaround, Zeno Ibsen Rossi sustained a toe injury during training  - he’ll require surgery, which forces him out for three months. Elsewhere, fellow defenders Harrison Dunk and Lloyd Jones, who both left the pitch on Monday, picked up ankle and shoulder injuries respectively – they’ll both need further examinations.

In the reverse fixture, the U’s were on the receiving end of a comprehensive 0-2 away victory for the Rams in the October tie, decided by clinical finishes from the experienced James Collins in the latter stage of each half to kick-start the Warne era.

Speaking after the match, Bonner men admitted, “It’s going to be hard to beat the best teams, that’s just a fact. In the end, it’s how many points you get over the season. These are the games you can learn a lot from, individually and as a team, and hopefully we can pick bits up that will serve us well for the season.”

The last time the U’s recorded a league win against County was on the 15th November 1980 when, in front of 15,000, Roger Gibbins, Derrick Christie and John Lyons wrapped up a famous 0-3 victory at the old Baseball Ground.

In their first trip to Pride Park, Cambridge United left empty-handed after they concluded 2022 with a 1-0 defeat in a testing Sky Bet League One encounter...

Despite keeping compact and holding their own, the U’s were carved open on the hour mark, with the Rams’ pressure paying off after Lewis Dobbin guided a header home from close range to inflict a first defeat in three for the visitors.

In front of a bumper crowd, the U’s were out to build on two impressive results and improve on their two-point gap from the drop, but knew a tricky test awaited in the Rams, who were nine unbeaten under Paul Warne and eager to enter the new year in the play-off positions.

Following the come-from-behind success against Shrewsbury Town four days earlier, Mark Bonner was forced into two changes to his starting XI. Following their injuries picked up on Boxing Day, defenders Lloyd Jones and Harrison Dunk made way for Greg Taylor and Shilow Tracey, who both made notable impressions.

In an industrious opening to the encounter, where both sides looked to pounce with their pressing, the U’s showcased confidence transitioning from the defence to attack in the 7th minute, linking up well down the right before George Williams’ cross was dealt by Joe Wildsmith.

A few minutes later, the first major opportunity arose when former U Nathaniel Mendez-Laing whipped in a dangerous delivery to Dobbin, but the youngster couldn’t generate enough power to test Will Mannion from yards as the goalkeeper gathered.

With 20 minutes on the clock, the experienced James Collins brought the ball down and hit a clean strike on the turn from the edge of the area, but it was fell invitingly to Mannion.

The travelling contingent were dealt a scare on the half an hour mark after David McGoldrick’s menacing delivery was pinpoint for Korey Smith, who had orchestrated the move but couldn’t finish it as his header was denied astutely by Mannion.

The Rams piled on the pressure as the first period neared its conclusion, with Dobbin and then Mendez-Laing’s troubling crosses from close-range evading its intended targets as the U’s continued to clear their lines and preserve the clean sheet.

Following the break, Warne’s men remained in the ascendency, mustering up a chance on the 52nd minute when the ball fell invitingly to David McGoldrick, whose attempt from ten yards was importantly blocked by Taylor.

The deadlock was broken four minutes later after Mendez-Laing danced into the box and floated a delicate cross to Dobbin who rose well to head home from close range.

In response, an intricate piece of play from Ben Worman helped weave the ball to Jack Lankester, who raced into the box but was under severe pressure as it was cleared. Following a quick throw-in, Harvey Knibbs found space to shoot, but was denied a shot on target by Craig Forsyth’s fine block.

On the 71st minute, Paul Digby teed up Sam Smith from 15 yards out – the striker picked his spot and cracked a drilled attempt at Wildsmith’s right post, but the 27-year-old met it well.

The points were almost wrapped up ten minutes later when Louie Sibley’s free-kick trickled towards the back post where Eiran Cashin was present, but the centre-back could only lash at the post as United were let off.

Five minutes from added time, United strived for the equaliser as Digby rounded off a sustained spell of pressure by heading off target. Despite continuing to plug away, it would prove to be the closest they came as the points remained in Derby.

Up next, the U’s enter 2023 with a trip to Hillsborough on Monday afternoon (2nd January) as they do battle with another promotion-chasing side in Sheffield Wednesday - be sure to get behind the boys. 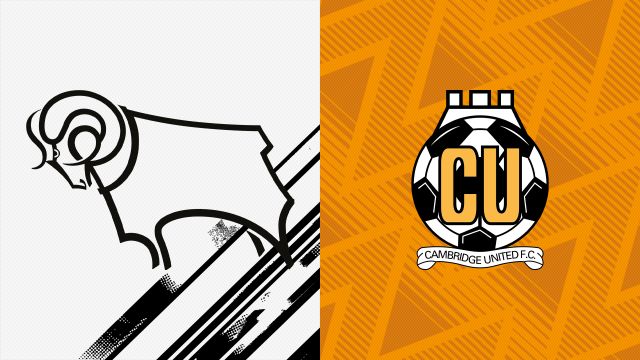 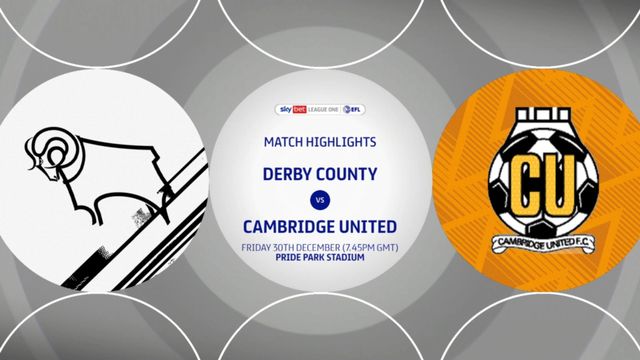 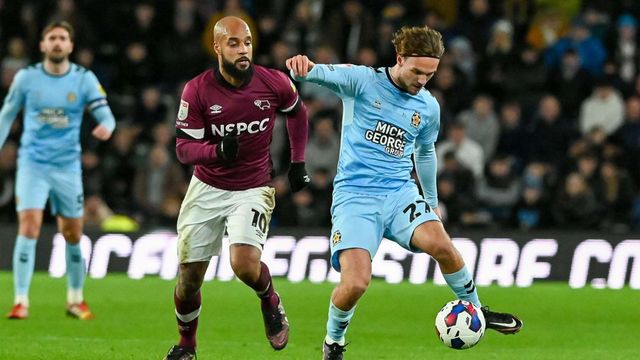