Cambridge United return to Sky Bet League One action with an encounter against basement side Burton Albion at the Abbey Stadium...

Despite not securing victory in either, the U’s arrive on the back of two performances to be inspired by – the aim will be to secure a third successive win on home soil in the league. Against a side low on confidence, the Brewers are out to terminate their strenuous start with a first win of the campaign.

Overseas fans can stream the game live with an iFollow Match Pass. Match Passes cost £10 and are available to purchase by clicking here. Elsewhere, domestic supporters who can’t make it to the Abbey can listen to live match commentary.

During his first spell at the Pirelli, Hasselbaink masterminded a consistent and free-flowing side who were on the up. This time around, he’s had to adapt to soaking up pressure and churning out the points when it matters – something the Brewers achieved with flying colours over the past two seasons. Under pressure owing to a turgid opening six games, where they’ve failed to score in five, Burton may need to go back to the basics in order to enjoy mid-table obscurity come May.

The transfer window gives firm indication the Brewers that loan signings could prove influential business. After releasing six players, Michael Bostwick, Ryan Leak and Oumar Niassa to name a few, seven new additions enter the building. Former U Victor Adeboyejo, Davis Keillor-Dunn and Calum Butcher are the permanent additions, whilst promising Aston Villa goalkeeper Viljami Sinisalo provides competition between the sticks and Quevin Castro, Tyler Onyango and Corrie Nbada all arrive with a stake to claim at their parent clubs.

An underwhelming month to say the least, the visitors were dispatched 3-0 by Wycombe Wanderers before a 1st minute red card in their next clash saw newcomers Bristol Rovers capitalise by trouncing them 0-4. Lower-league Rochdale knocked Hasselbaink’s group out of the Carabao Cup at the first hurdle. They bagged four in their next outing, but surrendered victory numerous times as Accrington Stanley clawed a bonkers 4-4 thriller. After falling 0-1 and 0-2 on home soil against Ipswich Town and Port Vale most recently, our opponents need a rapid response.

It may be two weeks since United last secured success, but that’s not to say the camp isn’t in a confident mood. After several tests of their defensive doggedness, the U’s came out of it aware of their capabilities and rightly should be optimistic ahead of consecutive matches on home soil.

It may require patience against a side who will make things as tricky as possible, but United have showcased strong build-up play and the ability to cause havoc on the counter-attack – traits which could bode well on Saturday afternoon.

Last time out, an imposing Southampton were thorough and professional as they overcame Mark Bonner’s men in midweek. Despite both sides making several changes, the Head Coach reflected that it was “a brilliant experience to play against and see that live,” going onto mention “we’ll be better as a team and a squad for tonight.”

In regards to team news, he said: “I think Harrison (Dunk) will be ok. Greg (Taylor) and Jubril (Okedina) need to be assessed and James Brophy is back from his illness. He will train, but we’ll monitor that.”

The last clash between the outfits was an entertaining one in February when United twice came back from behind to claim a share of the spoils thanks to Harvey Knibbs’ spectacular strike and Sam Smith’s bundle – altogether, the U’s attained four points from the Brewers.

Speaking after the game, Bonner was relieved his side travelled home with something to show for their endeavours, stating: “To make sure we took something from the game was so important today. We had good chances to break away and score on counter attacks, but our decision-making, execution, or sometimes the surface, let us down a little bit and it makes the game a really scrappy and scruffy one.”

Examining record that stretch back to 2005, the most notable matchup between the sides came during 2008 in the Conference Play-Off Semi Final, where memorable braces from Lee McEvilly and Rob Wolleaston sent the U’s to Wembley.

Cambridge United returned to winning ways in Sky Bet League One with a pulsating, topsy-turvy 4-3 thriller against 10-man Burton Albion at the Abbey Stadium...

In a blistering introduction to the match, Gassan Ahadme prodded home after just 14 seconds in play. An early bath for Jonny Smith eased matters for the U’s, who levelled through Sam Smith. John Brayford dealt a sucker punch before the break, but Smith restored the parity with his second header of the afternoon. The action wasn’t done there – Ahadme grabbed his brace mid-way through the second-half, but the hosts roared back as their number 10 secured the match ball and Liam O’Neil separated the sides to ensure a 100% start to their league clashes at CB5.

Despite not securing victory in either, the U’s arrived on the back of two performances to be inspired by – with the aim of extending their imposing form in CB5. Against a side low on confidence, the Brewers were out to terminate their strenuous start with a first win of the campaign.

Mark Bonner shuffled his pack by making six changes from the side that received a valuable experience against Premier League side Southampton in midweek. George Jones and Lloyd Jones remained in the defence, whilst Paul Digby, Joe Ironside and Smith also kept their places. Despite returning to training, James Brophy missed out on the squad due to illness.

The U’s received a nightmare start to the encounter when, with just 14 seconds in the clock, Burton drew first blood. Racing out of the blocks, Smith whipped a ball into the danger area – it was sliced at by Jubril Okedina, but fell to Ahadme who placed a header home.

Shell-shocked, United were in desperate need of a response. They got that on the 10th minute, but not by their own doing.  After a consultation with the fourth official, referee Benjamin Speedie handed Smith his marching orders for what appeared to be an unnecessary off-the-ball challenge on Harrison Dunk.

Starting to probe, the hosts executed their first attempt on target on 20 when Jones’ ferocious shot from 25 yards was straight at the chest of Ben Garratt who didn’t have the time to react, eventually trickling away from danger.

Dangerous with their crossing and aerial prowess, Williams’ deep cross just shy of the half an hour mark found Dunk at the back post, who blasted a header excruciatingly wide of the right post.

The leveller, which had looked on the cards, occurred on 33 when, in a carbon copy of a previous chance, Shilow Tracey produced a sublime cross to pick out an onrushing Smith down the right who arrowed an expert header towards the far post and into the back of the net.

Capitalising on their impressive short period, the Brewers regained their lead on the 40th minute when a succession of menacing corners eventually paid off after Terry Taylor picked out Brayford who headed past Dimitar Mitov from 8 yards.

Going into the second half, the U’s had work to do. The fact they had the advantage in terms of men was a consolation, but they needed to test the visitors a bit more – a change of formation was the solution for that.

It paid its dividends on 53 when Bonner’s side equalised once again. Adam May picked the ball up from outside of the box, attempting a shot-turned-cross which was flicked home astutely by the head of Smith.

Minutes after securing his brace, the livewire exposed the open Brewers with a marauding run but was denied by a brilliant save from Garratt who got down low to force a corner.

The U’s shot themselves in the foot on 66 when Ahadme robbed Mitov off the ball, getting his foot on a slight deflection which sneaked into the post.

Just like they had done twice before, the hosts roared back into the game a few minutes later when Smith grabbed his first hat-trick in amber by volleying home O’Neil’s sumptuous defence-splitting chip.

For the first time in the afternoon, United were celebrating taking the lead on the 78th minute when the side sparked pandemonium in front of the jubilant Newmarket Road End. Jack Lankester floated the ball towards Ironside who held the ball up impeccably, teeing up O’Neil who plummeted a trademark drilled scorcher.

Finally on top, it was an advantage the men in amber would not surrender - seeing the memorably bonkers tie out in an astute manner as they climbed up the league ladder and sent the home faithful home with the sound of coconuts.

Action at the Abbey continues on Tuesday night (30th August) as the Papa John’s Trophy Group Stages get underway when Arsenal’s U21’s come to the city – be sure to back the boys. 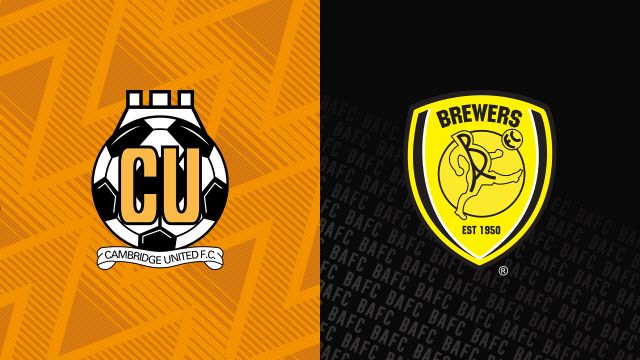 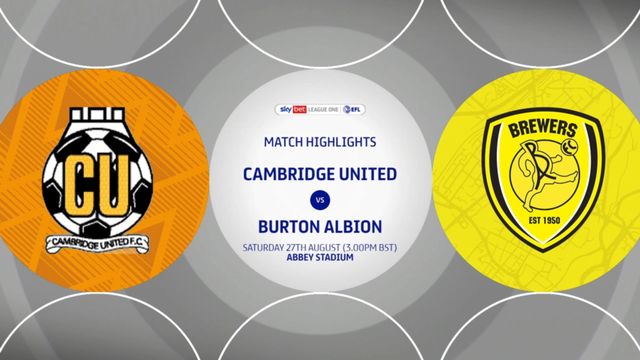 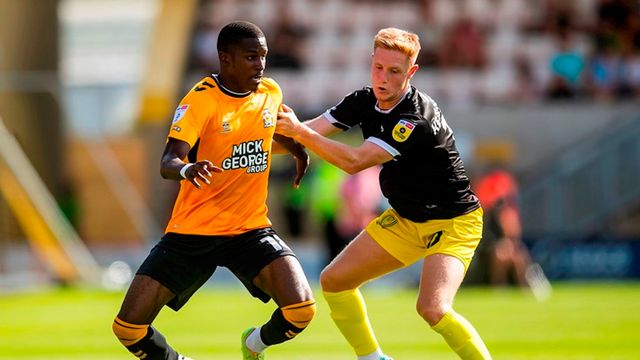