Cambridge United this weekend welcome Fleetwood Town to The Abbey having beaten Tottenham U21's on Tuesday...

The U’s last League One outing saw United end a 43-year wait for a victory over Portsmouth thanks to Joe Ironside’s towering header minutes before the conclusion of the first half, followed by a phenomenal second half volley from Liam O’Neil, and despite Ronan Curtis’ late strike setting up a nervy finale at Fratton Park – The U’s held on for all three points.

The Cod Army wouldn’t have been blamed for fearing the worst this season, after suffering three defeats in their opening three League One games. However, since the international break, Simon Grayson’s men have turned their fortunes around, picking up four points in their last two League One clashes against pre-season favourites Rotherham and Sunderland most recently, scoring six goals in the process.

The story was so nearly not so pleasant for Fleetwood on Saturday if it had not of been for Gerard Garner’s 97th minute penalty saving a point, much to Sunderland manager Lee Johnson’s displeasure – with the Cod Army impressively battling back from two goals down.

Points in both earlier fixtures against Cheltenham Town and Plymouth Argyle mean Simon Grayson’s side sit three points above the drop zone in 17th, yet hold a game in hand over sides around them.

Fleetwood’s impressive rise throughout the 21st century means The U’s have only clashed with The Cod Army on just five occasions, with neither side being able to boast a better record – winning two games a piece.

The last time in which both sides battled out came at the very start of The U’s famous FA Cup run during the 14/15 season – a run in which Richard Money’s side would eventually be knocked out by Manchester United in a Fourth Round replay. Kwesi Appiah’s strike, ten minutes from the final whistle and just a minute after Jamie Proctor had been dismissed for the Cod Army following an off the ball incident with Richard Tait, was enough to set up a Second Round tie against Mansfield Town.

The U’s ended the Cod Army’s 29-game unbeaten run in the Conference Premier the last time the two sides clashed in a league game. With Rory McAuley’s double enough for victory over the already crowned champions Fleetwood Town in April 2012.

U’s boss Mark Bonner is wary of the attacking threat Simon Grayson’s side carry ahead of Saturday: “They have a definite goal threat, to score four at Rotherham and then two against Sunderland, you know you are up against a team that have got real firepower. They [Fleetwood] have recruited well, Callum Morton is a real threat for them at the top of the pitch. The two Garner boys have done very well for them, certainly Joe Garner, signing at the back end of the window, an experienced player that is going to play a big part in their season.

“They tend to play more with a front two then some might in the division, so it will be a good challenge, an interesting one for us, but certainly a team that when you look at the games they have played – after not winning in their first three, against quite a lot of the top sides, or certainly the teams you perceive to be at the top end of the table. More recently, results have been excellent so for them to have three wins from the games they have had, similarly to us really – I think it has got the making of being a really good game.”

Simon Grayson is looking to build on the belief shown in Fleetwood’s comeback against Sunderland as they gear up to face The U’s this weekend: “I’m pleased with the players’ attitude and performance. Our dressing room after the game was feeling like it was a win and Sunderland’s will have felt like a defeat because when you concede in the last minute that’s how it can be.

“We can take more belief from what we’ve done (in the last two games) because we’ve taken four points from two teams that will be pushing to be in the Championship next season.”

Referee Paul Howard takes charge of his first U’s game since United’s memorable 3-0 win against Grimsby Town on the final day of last season in which Mark Bonner’s men secured their first promotion to the third tier in almost 2 decades.

The London based referee will be joined by assistants Garry Maskell and Stuart Butler, with Nicholas Cooper being appointed as fourth official.

The game will be FREE to watch for all NHS employees as a thank you for their hard work throughout this incredibly tough last year and a half.

Proof of NHS employment when visiting the Cambridge United Ticket Office is all that is required to secure your match ticket. Tickets must be used on the day by the employee redmeeming them - proof will be requested upon entry.

The clash kicks off at 3pm on Saturday 25th September with tickets available online, over the phone by calling 01223 566500 (option 1) or by visiting the Abbey Stadium Ticket Office on Tuesdays, Thursdays and Matchdays. 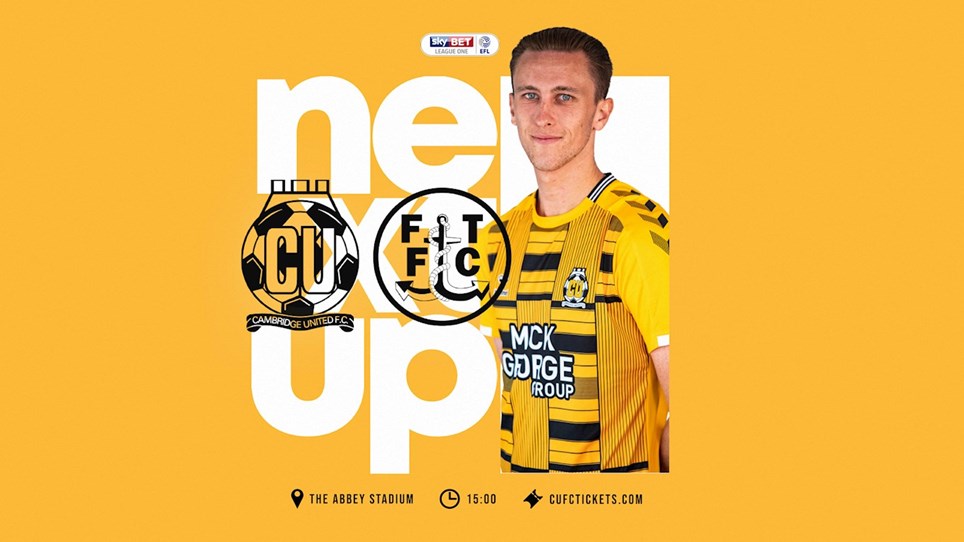 Next Up, U's host Fleetwood


NHS employees go free as The U's host Fleetwood Town looking to make it three wins on the bounce... 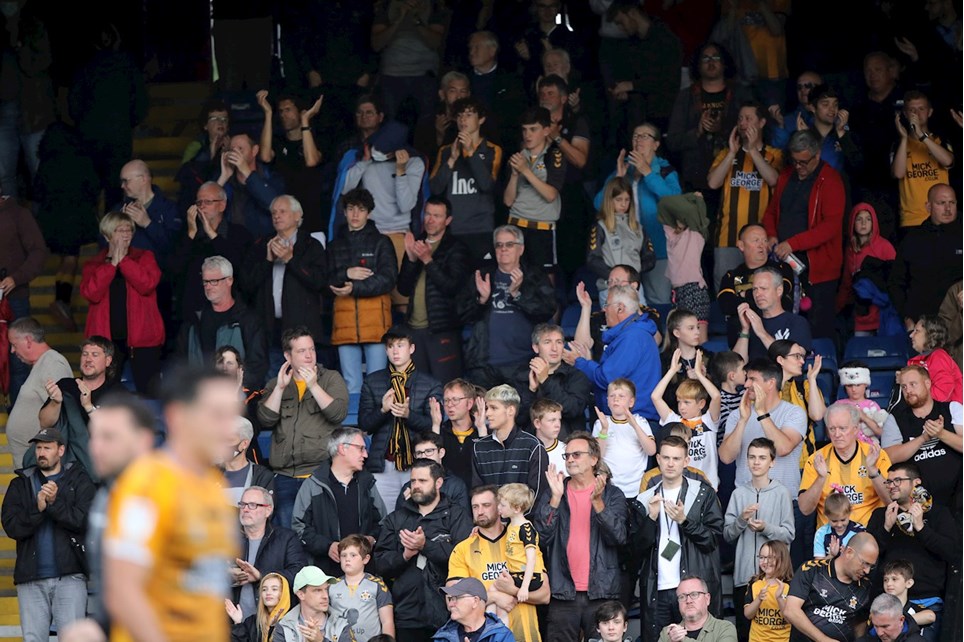 
Cambridge United are delighted to announce that NHS Employees will receive free admission to the U's game against Fleetwood Town at the Abbey on the 25th of September...

The shares were spoiled at the Abbey Stadium as Cambridge United drew 2-2 with Fleetwood Town in their latest Sky Bet League One clash.

The U’s had their work cut out after suffering an instant setback when James Hill headed home. Nonetheless, they showcased fighting spirit to turn the game in their favour after Adam May and Shilow Tracey nestled home. However, the sides could not be separated as a sweet Paddy Lane attempt ensured a point apiece.

Mark Bonner made the solitary change from last weekend’s victory at Portsmouth, with Jubril Okedina making his first league start of the season in the absence of Lloyd Jones. May and George Williams also kept their places after a resolute midweek display.

Both sides had picked up real form heading into what would be an intriguing encounter. The U’s had won three of their last four games and had found the back of the net in all seven of their outings, whereas the visitors were unbeaten in five in all competitions, scoring 14 in the process.

United were dealt their first setback within the 2nd minute of the game when the Cod Army struck the opener. Causing havoc from the get go, an inswinging corner was bundled home by Hill, who rose highest and nodded home.

The hosts’ response was a positive one with James Brophy firing wide of Alex Cairns’ crossbar after doing well to find space centrally in the 6th minute.

They then carved out a sublime piece of play down the left flank on 12, with some fluid passing moves engineered by Jack Iredale, but the full-back’s dangerous floating cross was towards an empty man.

On their next foray into the final third moments later, Paul Digby almost caught out Cairns with a dinked effort from outside of the box which dipped inches wide of the keeper’s left post.

The endeavour was there for the U’s - with some promising wide play showcased and real composure on the ball. Their intent paid off and their tails were up on the 34th minute when they drew level. After biding their time to creep forward, May picked his spot from 25 yards and curled a sweet strike into the bottom corner to deservedly hand United their equaliser.

Iredale almost handed his side the dream conclusion to the first half on the 44th minute when an applaudable free-kick from 25 yards dipped but was denied firmly by the gloves of a diving Cairns. Overall, the home side finished with the momentum after recovering well from their early setback, but remained cautious of their opponents threat from deliveries.

The U’s were celebrating their breakthrough on the 50th minute after the most scintillating of moves. A gut-busting run down the left from Iredale, who beat three men in the process, raced into the box and played it on a plate for Tracey who tapped home from 5 yards to spark jubilation.

Defensively, United remained stubborn and were good value for their lead after offering the visitors to very little opportunities. In their hunt for a third - which would arguably have proven to be the killer blow – Liam O’Neil tested his luck from the edge of the area on the 65th minute with his shot flying straight at Cairns.

It was Fleetwood’s turn to level matters on the 75th minute when substitute Lane cut inside from the right and converted an exquisite curling strike into the roof of the net, setting up a tense and very open conclusion.

Eager to snatch late euphoria, good recycling down the left on 84 from the U’s led to a splitting pass for a marauding James Brophy whose cross was slightly overhit for a looming Sam Smith. The striker had a half attempt in added time via his head, who accrued the power but not the accuracy as it flew just wide of the right post in the last of the afternoon’s action.

Be sure to back the boys in amber on home soil once more on Tuesday night (28th September) when Bonner’s side take on Steve Evans’ Gillingham.

Next Up, U's host Fleetwood


NHS employees go free as The U's host Fleetwood Town looking to make it three wins on the bounce...


Cambridge United are delighted to announce that NHS Employees will receive free admission to the U's game against Fleetwood Town at the Abbey on the 25th of September... 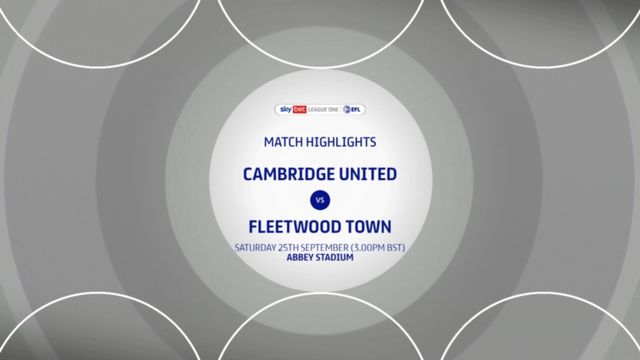 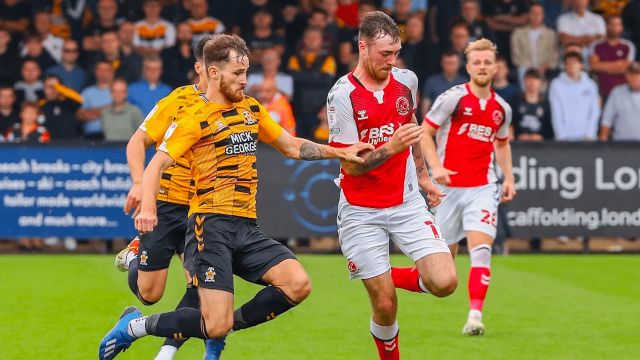