The U's are back in action on Tuesday night as they host Sheffield Wednesday...

The U’s come into Tuesday night’s fixture off the back of an entertaining draw with Ipswich Town, having, much like in their previous League One encounter with Crewe Alexandra prior to the international break, battled back from two-goals down to earn a point.

Sone Aluko’s brace set Paul Cook’s men up for what would have been their fifth win in seven, however, James Brophy’s strike coupled with Joe Ironside’s late header during a much-improved second-half display from Mark Bonner’s men earned the U’s a point against the pre-season promotion favourites.

A defeat and three draws in the U’s last four League One outings mean Mark Bonner’s men head into Tuesday’s clash with Sheffield Wednesday enduring their longest spell without a win this season.

Darren Moore’s men will head to the Abbey Stadium on Tuesday night following a frustrating 2-2 draw with AFC Wimbledon, a game in which the Owls found themselves sitting comfortably two-up mid-way through the second half. Lee Gregory’s brace either side of the half-time whistle was cancelled out by Nesta Guinness-Walker and Jack Rudoni’s late goal, succumbing the Owl’s to their fourth league draw of the season; keeping the Yorkshire side out of the play-offs on goal-difference.

Three victories in their opening four games back in League One saw Darren Moore’s men sit top of League One after matchday four. However, an impressive win over Wigan Athletic would prove to be the Owl’s only win throughout September. Form has picked up since the turn on the new month, with Lee Gregory’s single goal against Bolton Wanderers before the international break, earning Wednesday their third win in all competitions in a row before Saturday’s most recent draw with AFC Wimbledon.

Despite a summer of change, the Owl’s have impressively managed to keep hold of their star man, Barry Bannan, despite Championship and apparent Premier League interest from new-boys Brentford. The Scotsman, who has racked up 27 appearances for the Tartan Army, has become a fans favourite at Wednesday having played over 250 times for the Owls. The midfielder is one of many Wednesday players who boast playing experience in the Premier League.

Despite the head-to-head statistics, Mark Bonner’s men head into Tuesday’s clash off the back of a three-game unbeaten run against the Owl’s, with Luke Berry’s extra-time winner enough for the U’s to progress to the Second Round of the League Cup the last time the two sides met back in 2016.

Lucas Joao had originally given the visitors on the night the lead, however the Portuguese striker’s goal was cancelled out by Piero Mingoia’s brilliant long range effort in the last minute of normal time, taking the tie to extra-time.

“They have made a solid enough start; they are really in touch with those play-off positions. I guess when you are a club of that size, like a few that we will play this year, their expectation is to be in first spot so there is a pressure on them every single game.

“They [Sheffield Wednesday] have got some strong individuals; players that are well versed and have played a lot of football in the championship, so we know that they have the individual quality in the games and can cause problems at this level.”

Scott Oldham will head up Tuesday night’s clash at the abbey between the U’s and the Owl’s, having spent Saturday fourth officiating in Port Vale’s League Two game with Barrow. There was controversy surrounding Scott Oldham’s last refereeing performance – after the Lancashire based referee sent off Wycombe defender Anthony Stewart against MK Dons at the end of September, a decision that was later revoked by the EFL.

Andy Bennett and Conor Farrell will assist the referee, while Abbas Khan has been appointed as the game’s fourth official.

Limited tickets are still available online, over the phone by calling 01223 566500 (option 1) or by visiting the Abbey Stadium Ticket Office. So fans are urged to snap them fast before they are all gone.

However you choose to do so, make sure to get behind the U's once again.

Cambridge United put in a battling shift to pick up a point in a 1-1 draw against Sheffield Wednesday at an atmospheric Abbey Stadium.

George Williams capitalised on a blistering opening for the U’s by neatly heading home. However, in what was a case of a game of two halves, Fisayo Dele-Bashiru struck for the Owls ten minutes from time to ensure the sides couldn’t be separated despite their endeavour.

Mark Bonner made two changes to the side that fought back to share the spoils with Ipswich Town three days earlier. Jensen Weir was drafted in for his second league start of the campaign whereas Sam Smith added to the attacking ranks as they meddled with formation.

Going into the side’s first league encounter since 1984, the U’s had enjoyed a steady campaign to date and boasted a respectable return of just two losses in their last nine thanks to consecutive late showings. The visitors had proven stern at the back but were keen to add more goals to their name after registering just 13. Nonetheless, after a run of one defeat in six and on the cusp of the play-offs, a testing spectacle was in store at a vibrant Abbey.

Over recent weeks, the U’s had found it a challenge to begin clashes on the front foot, but that proved contrasting in this instance as they stamped early authority over the Owls. The first opportunity of the evening fell to the way of Smith on the 7th minute - who after being released by Weir scampered into the far right of the box but was denied by Chey Dunkley who impeccably got his body on the line.

Williams’ barnstorming start was rewarded on the 19th minute when he handed the hosts a thoroughly deserved lead in front of the Newmarket Road End. The full-back met Jack Iredale’s venomous low corner at the front post and flicked it beyond a sea of defenders to cue pandemonium.

The intensity and desire remained a constant in a scintillating half an hour for United who were already itching for a second. The excellent deliveries down either flank were proving menacing, forcing the visitors to stay alert and clear their lines numerously.

The U’s were dealt a mighty scare on the 34th minute after Lewis Wing was played clean through on goal and almost seemed to hesitate in the one-on-one position before being denied by a commanding low collection from Dimitar Mitov.

The Owls started to knock on the door and tested United’s backline again three minutes later. Dele-Bashiru twisted and turned inside the box, teeing himself up and unleashing a powerful attempt that clattered the post and away from danger.

Darren Moore’s men gradually started to ramp up the pressure – a teasing corner fell perfectly to Dominic Iorfa moments before added time but the defender got awkward contact on it thanks to defensive duty from Ironside. Ultimately, it was a commanding first half for the hosts whose shape and application was encouraging.

As the rain continued to lash down on the slick Abbey turf, the game remained in the balance with both sides battling to execute that killer ball. On 55, Barry Bannan’s exquisite lofted ball fell to a scampering Lee Gregory but the striker was prevented by a puissant tackle by the imposing Lloyd Jones.

Orchestrating essentially every Owls attack during the second period, Bannan picked his spot from 25 yards on the 64th minute - but United’s number one got down low to paw the Scotsman’s speculative effort.

The U’s hearts were in their mouths five minutes later when Bannan’s close-range effort beat Mitov but couldn’t pass Smith who was looming on the goal line to perform a last-ditch header and prevent the equaliser. It was a critical moment in the tie where Darren Moore’s side were applying heaps of pressure to the home sides’ rearguard, but still they remained firm.

The defence was carved open on the 79th minute when the visitors levelled matters. Dele-Bashiru was fed down the right side and calmly fizzed home.

The Owls were throwing the kitchen sink at the U’s. A Bannan delivery minutes later was pinpoint for an onrushing Liam Palmer, who headed towards the left post but was denied by the remarkable reflexes of Mitov to deny Wednesday a quickfire turnaround.

To a man, Bonner’s side had to grind out a free-flowing remaining moments. Nonetheless, they stayed compact to secure a share of the spoils.

Be sure to back the U’s on Saturday afternoon (23rd October) when they venture to the Montgomery Waters Meadow to take on Steve Cotterill’s Shrewsbury Town. With tickets available to buy here. 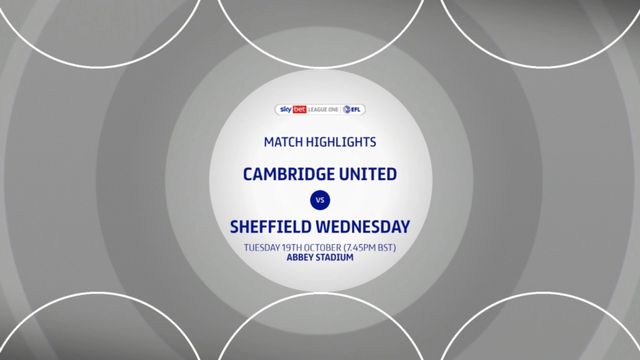 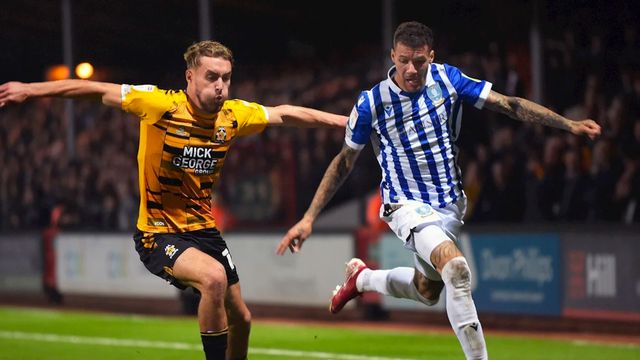