The U's will look to build on Tuesday night's draw as they face AFC Wimbledon at the Abbey Stadium this weekend...

Despite having a limited arsenal at his disposal on Tuesday night – following the unavailability of suspended pair Adam May and Paul Digby, as well as goalkeeper Dimitar Mitov having to sit out – Mark Bonner and his side earned a point on the road against Doncaster Rovers.

Prior to Tuesday’s draw in South Yorkshire, the U’s were comfortably beaten by Shrewsbury Town in what was an afternoon to forget for Mark Bonner’s side. Ever-present ‘keeper Dimi Mitov was forced off after just 37 minutes with the U’s already a goal down, and despite a wonder-strike from Jack Iredale bringing the two sides level in the second half, the dismissal of Adam May as well as a Ryan Bowman hat-trick condemned the U’s to a 4-1 defeat in Shropshire.

United are proving hard to beat though, having drawn four of their last five games, but will be eager to make it a winning afternoon on Saturday to get moving back up the League One table.

Saturday’s visitors head to the Abbey off the back of a 2-0 defeat to Crystal Palace Under 21’s in the Papa John’s Trophy on Tuesday night, after goals from Rob Street and Jesurun Rak-Sakyi for the Eagles.

Just one defeat from their opening seven games in League One this season had the Dons sitting fourth following an entertaining 4-3 victory over newly promoted Morecambe midway through September. However, defeats against Plymouth and Arsenal in the Carabao Cup sparked a run in which has seen the Wombles win just one of their last nine outings in all competitions. 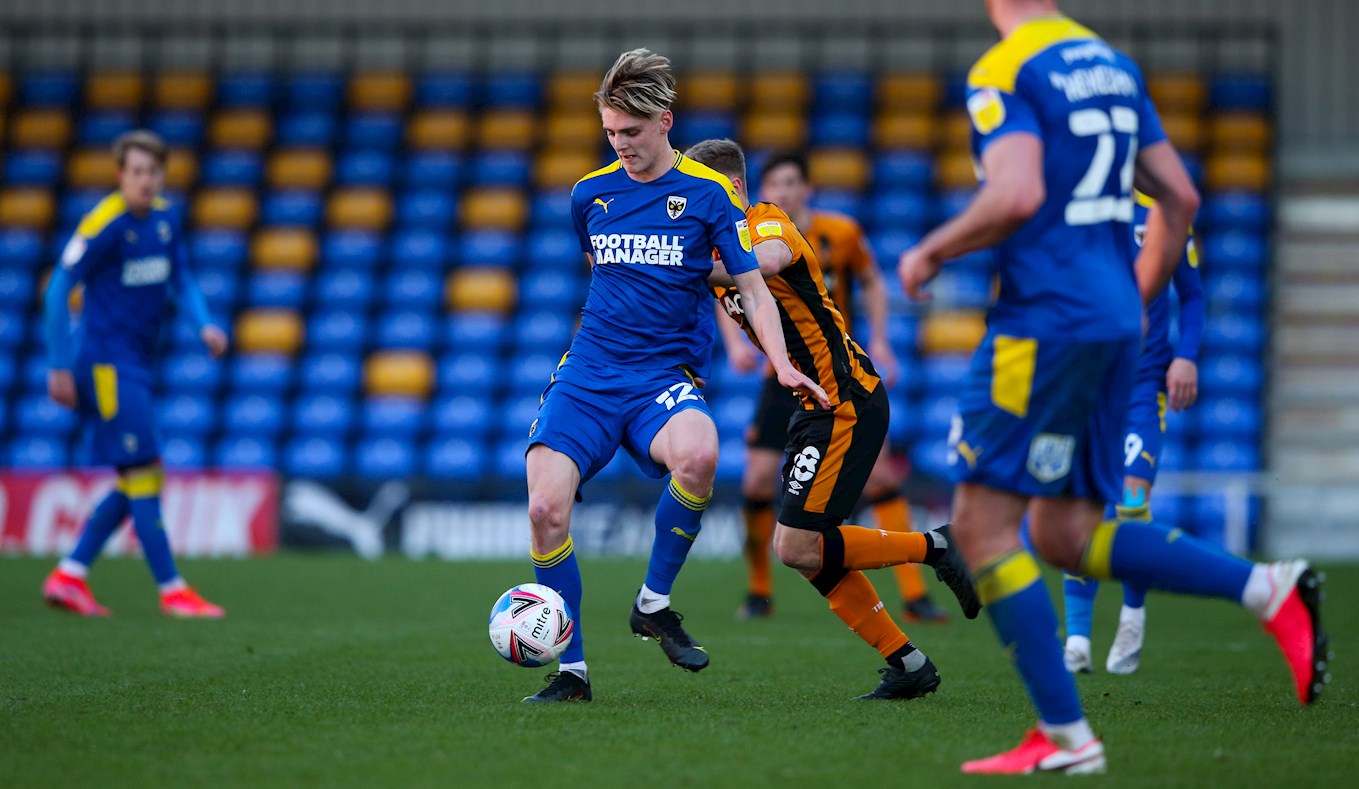 One off the Dons’ impressive academy production line is 20-year-old Jack Rudoni, who progressed through the Wimbledon youth ranks after joining from Crystal Palace as a 10-year-old. The natural midfielder, who has spent the majority of this season playing down the right wing has scored four goals in eight League One starts this season, topping the scoring charts for Mark Robinson’s side this season.

The two clubs have only faced off against each other on eight occassions since the newly founded AFC Wimbledon came into existence, with Saturday’s visitors holding the slight edge over United – winning on three occasions, compared to the U’s two.

The last encounter between the two side came back in 2016 and was certainly one to forget for Shaun Derry’s Cambridge United. Goals from Paul Robinson, Lyle Taylor, John Meades and Ade Azeez earned AFC Wimbledon a 4-1 win at the Abbey and in the process ended a six-match unbeaten run for the U's.

United did taste success over the Dons back in 2015, with Kwesi Appiah and Liam Hughes earning the U’s a 2-1 comeback win at the Kingsmeadow Stadium after Matt Tubbs had given the hosts an early lead on the day.

U’s Head Coach Mark Bonner is expecting a tough match-up against AFC Wimbledon on Saturday: “Mark Robinson has been at the club a long time and understands the inside of the football club as well as the culture of the club. They have got a real spirit about them in the way in which they play, similar to ourselves, and have got a real resilience and work ethic.

“They have had some excellent results this season and have got some real threats in the team that we will need to be aware of. I think it builds itself to be a really good game. We have had some good battles with them over the years and I am looking forward to this one at the weekend.”

After serving his suspension, midfielder Paul Digby will be available for Saturday’s clash: “Another good challenge, but a challenge that we can win as well. Wimbledon are a very good team, very young, energetic, and enthusiastic. They have got a really good press on them and some really good players in there as well, so we have got to be at our absolute best.”

Tom Reeves has been appointed as referee for the game at the Abbey Stadium, with Michael Chard and Ryan Whitaker coming in as his assistants. Darren Drysdale will oversee the game as fourth official.

The clash kicks off at 3pm on Saturday 30th October with tickets available online, over the phone by calling 01223 566500 (option 1) or by visiting the Abbey Stadium Ticket Office on Tuesdays, Thursdays and Matchdays.

Cambridge United returned to winning ways after edging out AFC Wimbledon 1-0 at the Abbey Stadium...

After a tight first half, Jensen Weir exploded United into life moments after the break with a delightful header to separate the points and grab a very welcoming three points.

Mark Bonner named three changes from the threadbare team that gained a point at Doncaster Rovers in midweek. Paul Digby returned from suspension to captain the side with Wes Hoolahan and Joe Ironside being deployed to the attacking ranks as the U’s

A return to winning ways was invaluable for United - whose recent form of seven without victory needed addressing. Nonetheless, they’d shared the points in five of those, tallying a creditable run of just two losses in eight and further highlighting their hard-to-beat mentality. Eager to steer the ship in their sixth season in the third tier, a promising Dons side obtained a solitary point advantage over the hosts despite finding themselves in a sticky rut of one win in nine.

The U’s started the match on the front foot, looking sharp and creating the afternoon’s first opportunity on the 6thminute. Hoolahan picked up the ball from a short corner and whipped a cross onto the head of an unmarked George Williams who leaped well but couldn’t get his angles right as it diverted inches wide.

The opening half an hour of the encounter proved a battle with both sides limiting each other in the middle of the park. The next real piece of entertainment arrived on 34 when Jack Rudoni got the final touch on a delivery from the far left, but the attacker couldn’t generate the power to test Tomas Holy who calmly collected.

The aforementioned U’s loanee remained composed in the middle of the park three minutes later - performing a dummy and engineering a handy attack concluded by Weir- with the ball floating to him from 25 yards out but the midfielder’s venomous strike was blocked by Daniel Csoka who bravely put his body on the line.

Holy came to the rescue for United on the cusp of half-time. A good ball from Chaye Alexander was flicked on by Rudoni and looked destined to nestle into the corner before the goalkeeper pulled off a stunning reflex save to ensure the sides remained deadlocked.

Fortunately for the hosts, it wouldn’t last long as Weir handed them the dream start seconds after the interval. The Brighton & Hove Albion loanee added the right mixture of power and accuracy to loop his header home from 12 yards to give the U’s the advantage.

The breakthrough gave Bonner’s men a real chance to control the game and ultimately try to conjure up a second. They almost capitalised on exactly that with some quickfire golden opportunities on the 56th minute. Shilow Tracey, who had been running the show, was released down the far right of the penalty area and forced Nik Tzanev into a low save. A goalmouth scramble ensued, eventually falling to Weir who looked destined to secure a brace but was denied by goal line heroics from Ben Heneghan.

The Wombles’ reaction was gradual, but the substitute of Ollie Palmer added an extra dimension to their game. They dealt the U’s with a heart-in-mouth moment on 67 when a flicked Csoka header from a teasing delivery left Holy rooted to the spot, grazing the post and bobbling out of danger.

As the game turned scrappy, United remained professional and assuring with their defensive work, clearing the lines with aplomb at every attempt.

They were almost left helpless on 85 when substitute Nesta Guinness-Walker scampered into the box and lofted a pinpoint cross towards Rudoni, but from six yards he cushioned his header into the gloves of the imposing Holy.

Looking to kill the game off, excellent hold-up play from Ironside teed up Weir who darted inside the box but blazed his drilled attempt wide of Tzanev’s left post. The damage was done nonetheless – with the U’s staying firm to tear up their winless run and secure a first league clean sheet since late-August.

The U’s will look to secure back-to-back victories next up when they make the trek to the Mazuma Stadium on Tuesday evening (2nd November) to take on fellow newcomers Morecambe. 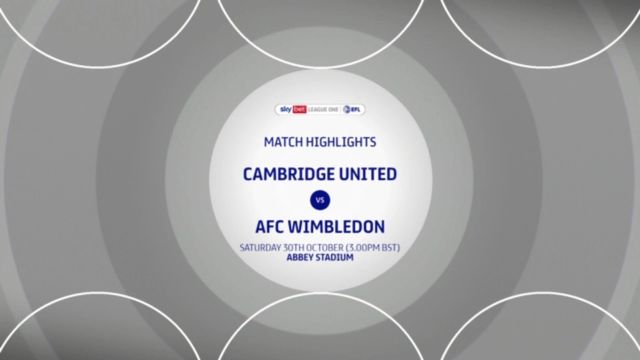 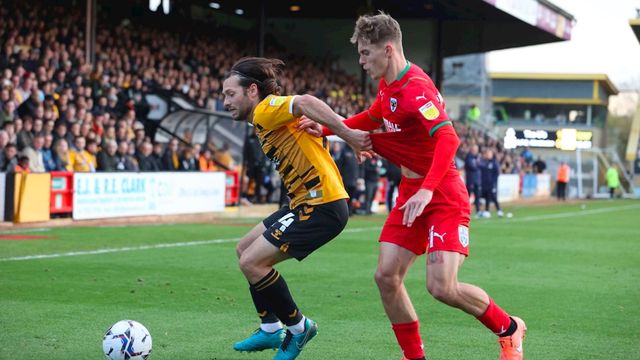