Having already qualified out of Group H (Southern) following Oxford United’s 3-2 over Tottenham Hotspur Under 21’s last week, Mark Bonner’s men will head into Tuesday’s clash with Stevenage with considerably less pressure on their shoulders than their counterparts on the night – who must avoid defeat against the U’s if they are to progress.

Sam Smith’s brace, coupled with goals from Harvey Knibbs and Kai Yearn earned the U’s a comfortable win over Oxford United in their first outing, before Sam Smith struck again infront of the Abbey crowd against Spurs Under 21’s to leave United sitting top of the group going into Tuesday's game.

The U’s were left frustrated by Northampton Town on Saturday, with the fourth division side’s endeavour earning the Cobblers a First Round replay at the Abbey Stadium, having played out an entertaining 2-2 draw at Sixfields. Goals from Kion Etete and Paul Lewis had the hosts leading twice, but Cambridge United battled back well on two occasions, thanks to goals from Sam Smith and Conor Masterson.

Boro fans would have been hoping to push on in England’s fourth tier following a respectful 14th place finish in Alex Revell’s first full season in management last season. However, just one win from their last 13 League Two outings has seen the club battling it out at the wrong end of the table, with the Hertfordshire club sitting just two points above the drop zone.

Stevenage’s Papa John’s Trophy fate remains firmly in their own hands thanks to their win against Oxford United in October, whereby goals from Jamie Reid and Luke Norris earned the Boro a 2-1 comeback win over Karl Robinson’s side. Even if Alex Revell’s side do fall to defeat on Tuesday – scoring two or more goals against the U’s will ensure their pathway through to the knockout stages.

Stevenage hold a historical edge over the U’s when it comes to head-to-head clashes between both sides, with the Boro winning on 11 occasions, two better than United’s nine.

The U’s hopes of promotion at the first available opportunity were dented at the hands of Alex Revell’s side last season, with Luke Norris scoring the game’s only goal midway through the second-half. However, it was not to have a lasting effect on Mark Bonner’s side, as United were to be promoted on the final day against Grimsby Town.

Cambridge United were last victorious over Tuesday’s hosts back in 2019, where David Amoo and Jevani Brown struck in a 2-0 win for Colin Calderwood’s side.

U’s Head Coach Mark Bonner is expecting to rotate his side ahead of Tuesday’s game: “We have to rotate the pack this week. By the time we have finished this spell, we would have done eight weeks of Saturday-Tuesday games, which is busier than last year.

“We are quite looking forward to Tuesday’s game, it gives a chance for some have played less to play which is important, but by changing it up so much you never know quite what impact that will have, but we have to not get too obsessed by that; we have just got to make sure players are on the pitch that need to be.”

Referee Charles Breakspear will head-up Tuesday’s clash at the LAMEX Stadium, with Joseph Stokes and Louis Marks coming in as assistants, while Kirsty Dowle has been appointed as the game’s Fourth Official.

Supporters can back the boys in-person or from home, with tickets and iFollow Match Passes both available.

Tickets are priced as £12 Adults, £10 Concessions and U18s whilst U12s are free of charge. Online purchases can be made from cufctickets.com and end at 9pm on Monday 8th November 2021. Tickets will also be available from the Lamex Stadium on the night of the game.

For fans who are not able to attend, the next best way to get behind the U's is by streaming the action with iFollow.

Match Passes are available to buy now for just £10. Click here, select the Stevenage fixture and either log-in to your existing iFollow account or create a free account to buy your Pass.

The result and top spot finish means that the U’s are guaranteed a home tie in the Second Round, whilst Boro will also advance to the knockout stages.

Mark Bonner named a much changed side, with only Jubril Okedina, Adam May, Ben Worman and Conor Masterson keeping their place from Saturday’s FA Cup match at Northampton, whilst seven Academy products were included in the squad, including a first start for 16-year-old Kai Yearn.

The first half saw little goal-mouth action as both sides struggled to create any clear openings. A goal-line clearance from Leon Davies to Stevenage’s top scorer, Elliott List, after just 10 minutes was the closest either side to scoring during the majority of the first half.

The U’s best moment of opening period came on 37 minutes, as Bennett raced down the right to play the ball across to Knibbs, whose blocked shot came out to Yearn, but the chance went begging as he failed to take it under.

A few minutes later, Elliott List opened the scoring for Stevenage with a neat finish from 10 yards out following a quick counter-attack up the pitch to give Boro the lead.

It was the hosts who came out the quicker to start the second half and McKenzie-Lyle was twice required to keep the score at 1-0 as Jake Reeves and Bradley Barry both fired in powerful, on-target strikes that were brilliantly beaten away.

With 10 minutes gone, the U’s started to finally turn the screw and put pressure on the Stevenage goal and the introductions of James Brophy and Jensen Weir added further impetus into United’s push for an equaliser.

There was a let off on 66 minutes as Jamie Reid struck the post with a lob over McKenzie-Lyle that had the keeper beaten and then with 77 minutes on the clock, Stevenage stopper Smith made his first save, denying Harvey Knibbs from point-blank range after Davies swung in a perfect cross for the striker.

Joe Ironside was soon brought on as the final United change but couldn’t make any meaningful impact as Stevenage came away with the victory on the night.

The draw for the Second Round will take place live on Sky Sports Football on Saturday 13 November, following the coverage of Bradford City vs Port Vale. 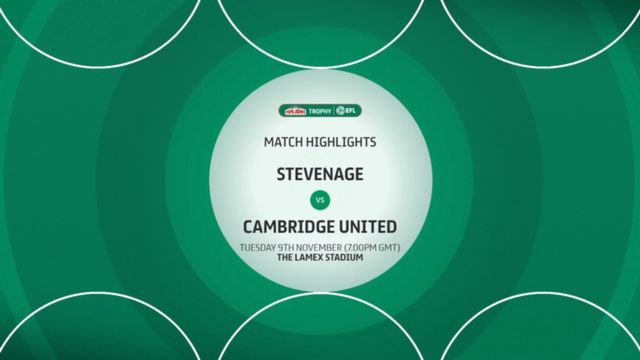 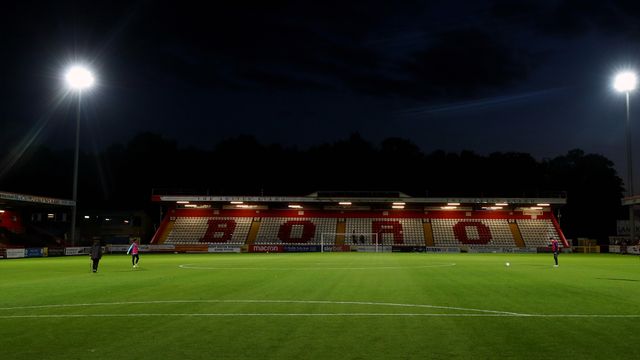