Mark Bonner’s men make the trip up to the New York Stadium on Saturday looking to make it four wins in their last seven, as well as consolidating their position in the top half of League One.

Prior to Tuesday night’s FA Cup success against Northampton, A humbling 4-1 defeat at the hands MK Dons last weekend proved to be a stark reality check of the quality in League One for United, having previously enjoyed a run of successive wins in the league over sides near the bottom of the table.

However, the U’s returned to winning ways during mid-week, as goals from Harvey Knibbs, Sam Smith and Ben Worman secured United’s progression into the Second Round of the FA Cup; setting up a home tie against one of Exeter City or Bradford City.

Following the same script in which has seen the Millers yo-yo between the second and third tier for the last five seasons, Paul Warne’s side find themselves sitting third in League One; just three points off the automatic promotion places.

A trio of international call-ups saw Rotherham’s clash with Shrewsbury postponed, meaning a two-week hiatus of Millers action prior to their clash with Cambridge United on Saturday, beforehand, Warne’s side comfortably secured their place into the Second Round of the FA Cup with a 3-0 win over ten-man Bromley.

Goals from Ben Wiles, Freddie Ladapo and Will Grigg, without reply from National League side Bromley sets up the Millers for a Second Round tie against Stockport.

An emphatic 5-1 win over promotion chasing Sunderland, coupled with another impressive outing against MK Dons in October has seen the Millers solidify their position within the League One play-offs. 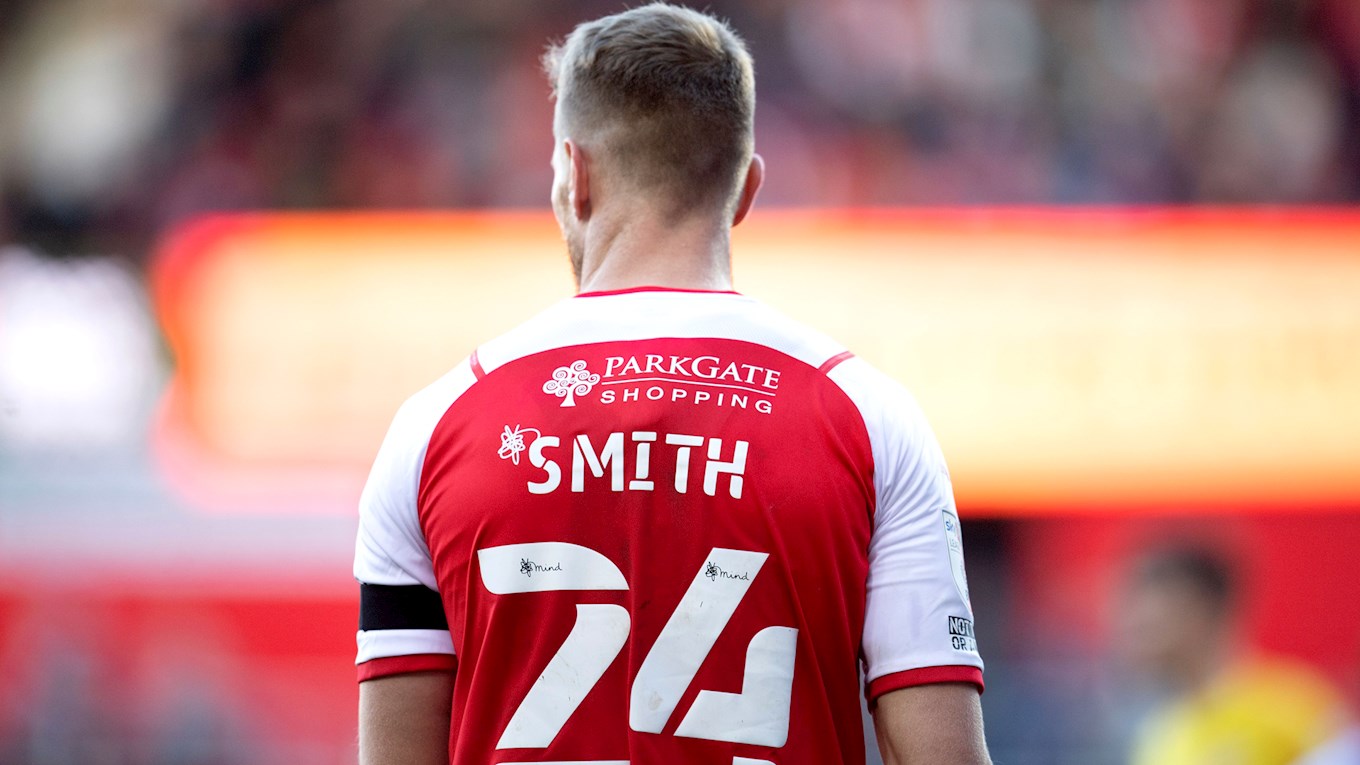 Rotherham were fortunate to keep hold of prized asset Michael Smith throughout the summer, after the winger bagged ten Championship goals in what was a disappointing season for Paul Warne’s side last campaign. The former Bury and Portsmouth man, now somewhat of an EFL veteran at the age of 30, has not let off this season, having already contributed to 15 goals (12G, 3A) in just 16 League One appearances.

Saturday’s hosts Rotherham boast the historical advantage over the U’s, having won 11 of the 25 games between the two sides, three better than United’s eight wins.

Most recently, Rotherham ran out 1-0 winners in a League Cup First Round tie in 2015, with Jordan Bowery scoring the game’s only goal in first half stoppage time.

U’s Head Coach Mark Bonner on Saturday’s opponents: “Rotherham are very different in terms of the style which they play compared to MK Dons, but they are in great form and have got a strong squad which is very similar to the one that competed in the Championship last year. We know what we are up against and how tough of a task it will be.

“We know we can go there and get a result. We have done it before against the top sides away from home in this division; I think what we have realised, and recognise, is that we must find a real top level to do that.

Paul Warne is not expecting his side to walkover Cambridge this weekend: "Mark is a young manager who I think has done really well. He's got them a promotion; the team are used to winning and they're confident.

"They're not dissimilar to us in the way they play - they cross it and Ironside is a good physical threat up top.

"Take away the recent MK Dons defeat, prior to that they'd won away at Morecambe and Wimbledon and drawn with Doncaster, Ipswich and Wednesday. They are no mugs. They're a good team who know what they are. They have a real identity that I'm really impressed with."

Andy George will take charge of the game on Saturday at the AESSEAL New York Stadium, with Michael George and Graham Kane being appointed as assistants. Scott Simpson will oversee the clash as fourth official.

U’s fans who haven’t secured their tickets for tomorrow’s game can purchase them on the day of the game at the AESSEAL New York Stadium.

International supports can watch the game by purchasing an iFollow Match Pass.

The Millers showed why they are challenging for the League One title, as they capitalised on the U’s mistakes to race into a two goal half-time lead.

Sam Smith scored his fourth goal in as many games early after the break to set up a barnstorming second half effort, but it wasn’t enough for a United revival as the home team regained their two goal lead in the closing stages.

Mark Bonner named three changes to the side that beat Northampton on Tuesday, as Brophy, Hoolahan and Masterson came into the team in-place of Knibbs, Worman and Okedina.

Wes Harding had the first chance of the game and should have scored, as his back-post run from a Millers corner went unchecked but the Rotherham man could only find the side-netting.

Another back-post header - a few minutes later - forced a superb scrambling stop from Mitov as Sadlier stooped low to direct his header towards the target, only to see the United number one claw the ball away.

Despite not creating any clear cut chances during the opening 20 minutes, United were posing a threat on the counter-attack but couldn’t quite execute the final action. A long pass from Brophy found the head of Smith, and just as it looked like his knockdown was going to fall into the path of the on-rushing Hoolahan, Harding came across well to cover and clear up the danger.

It was clear early on that if the U’s were going to leave the New York Stadium with a positive result, then Mitov would need to have a good game and Mark Bonner’s men would need to get the rub of the green.

Both things happened around the 22 minute mark, as Mitov palmed away an on-target Grigg effort before Ogbene went down in the area under the challenge of Dunk, and despite strong Rotherham protests, the referee waved play on.

Hoolahan screwed a shot wide from just inside the box as United went on the attack again, but the home side were handed a gift, as a loose pass inside the U’s final third was seized upon before Ben Wiles hammered home a close-range volley to give Rotherham the lead.

Cambridge came the width of the crossbar away from a late first half equaliser when Hoolahan picked out the run of Williams, but it was a difficult strike to get hold of as he ran onto the volley and hit the upright with a powerful first-time effort.

Then, with the last action of the half, a long ball over the top for Ladapo caused havoc in the United defence as the Millers striker got the better of Masterson and then Iredale, before the latter was adjudged to have tripped him up. Barlasar convered the spot-kick and United went into the break 2-0 down.

Two minutes into the second half, United worked a golden opening as Brophy laid the ball in-behind the Rotherham defence for Dunk to run onto, but his pull-back across goal was fired into Ironside, who couldn’t redirect the ball towards goal.

The deficit was halved on 51 minutes, as a slick one-two between Smith and Hoolahan saw the Irishman backheel the ball into the path of Smith, who curled home a beautiful strike from just inside the box to breathe life back into the U’s.

Cambridge had the wind behind their sails and were looking dangerous. Hoolahan again fed Smith, this time from a deep cross towards the head of the U’s marksman, but his header was straight at Vickers who easily saved.

Hoolahan was pulling the strings in vintage fashion as United continued to push. A deft outside of the foot pass found Williams at the back-post, who headed back across goal for Ironside, but the striker somehow failed to make a connection with his diving header as the goal was at his mercy.

With just over 20 minutes to go, the match became more and more stretched, as Sadlier forced Mitov into a stop from distance, before the U’s broke with intent behind the roar of the travelling 399 behind the goal, only for Smith to be tackled 20 yards out from goal.

Brophy struck just wide of goal from a narrow angle on 78 minutes, as Hoolahan cut the Rotherham back-line in half with a perfectly weighted through-ball with the game coming down to the wire.

That was until just three minutes later, when Ladapo headed in from close range to restore Rotherham’s two goal cushion and seal the victory for the home side.

The U’s return home for a big week at the Abbey, as matches against Wigan on Tuesday and Sunderland on Saturday await. 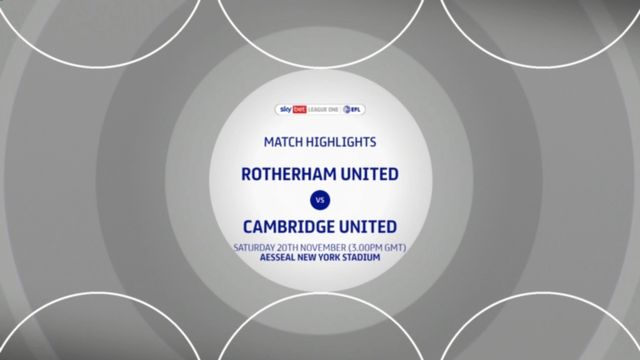 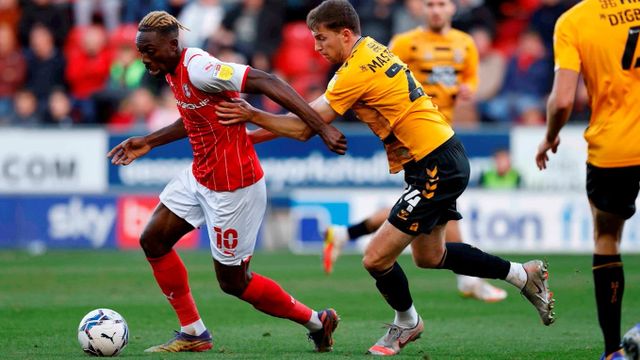