A home tie against Bradford City or Exeter City, who are also in action on Tuesday night, await the winners of tomorrow night's clash.

The Cobblers proved to be awkward opponents for Mark Bonner’s side, as his U’s played out an entertaining, but scrappy 2-2 draw at Sixfields Stadium a week and a half ago, forcing the tie to be settled at the Abbey Stadium in a replay.

The boss vented his frustration following the initial draw at Sixfields, as his U’s side were “stretched” by Northampton’s direct play and is expecting his side to “give a better performance” on Tuesday night.

A humbling 4-1 defeat at the hands MK Dons on Saturday proved to be a stark reality check of the quality in League One for United, having previously enjoyed a run of successive wins in the league over sides near the bottom of the table.

Braces from Scott Twine and Max Watters condemned the U’s to only their fifth defeat in League One this season, and despite a much improved second half, which saw Sam Smith score his sixth goal of the season in all competitions, United couldn’t claw their way back into the game.

The defeat won’t dampen the ever-impressive spirits within the U’s camp however, with Mark Bonner making it evident after the game that his side will be “fighting different battles this season” to Milton Keynes, who moved back into play-off contention following the win.

Prior to Saturday’s defeat, wins against AFC Wimbledon and Morecambe had seen Cambridge United move into the top half of League One.

Jon Brady’s Cobblers, much like the U’s, had been enjoying a run of victories in the league before tasting defeat on Saturday, as a five-minute collapse in the second half saw Northampton sacrifice their lead and see ten-man Bristol Rovers take the three points. The result also saw the Cobblers drop out of the automatic promotion spots in League Two.

Despite the defeat, the Cobblers will be buoyed on by the fact that they’ve won four of their last five League Two outings and proved to be more than a match for Cambridge United last weekend, in a game which saw Brady’s side led twice, only to be pegged back on both occasions by a resilient Cambridge United side. 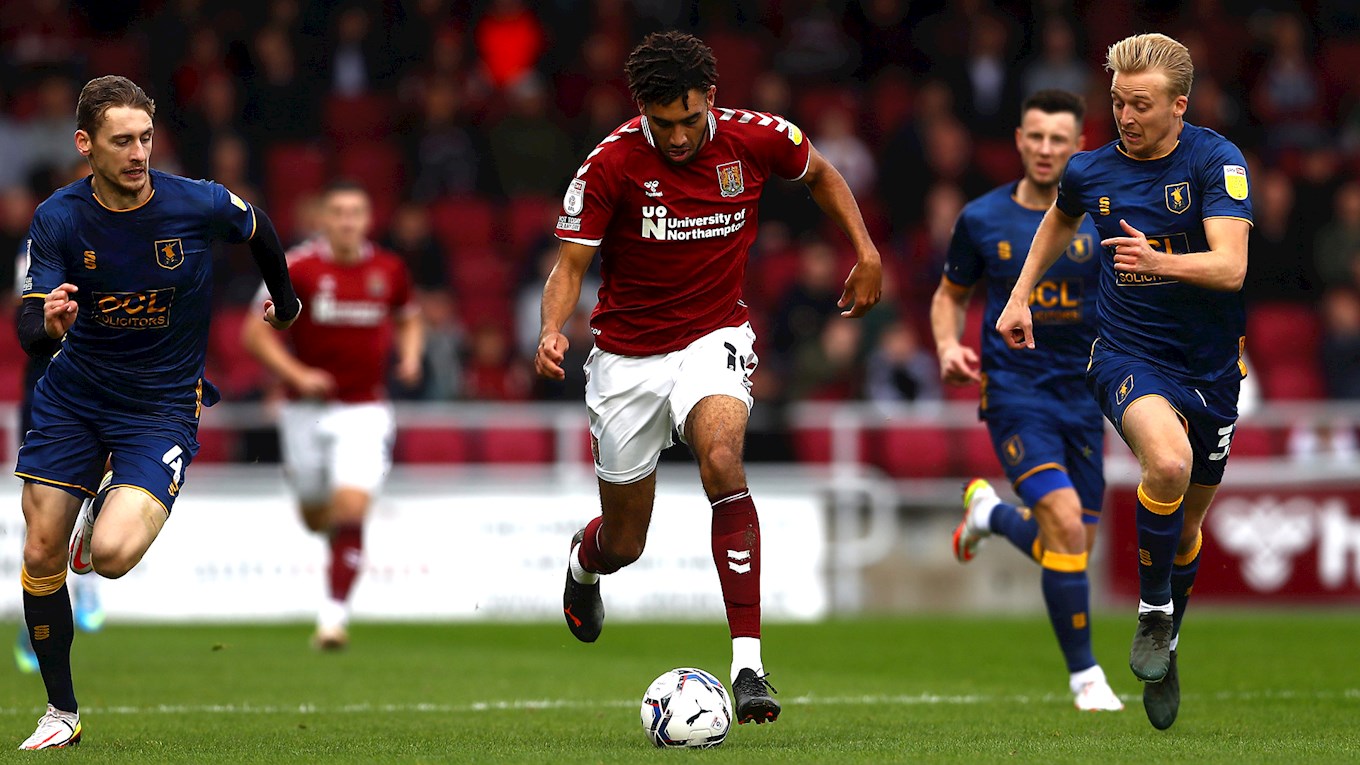 The 19-year-old has made a seamless step into senior football, having made only four league appearances for Notts County prior to making the switch to Tottenham in 2019. The physical 6’6” striker bagged the first of Northampton’s two goals last weekend against the U’s and proved to be too hot to handle at times for Conor Masteron and Jubril Okedina.

Tuesday’s visitors, Northampton, boast historical bragging rights over the U’s, with the Cobblers winning on 18 of the 45 occasions both sides have met – four better than United’s 14 wins.

In the most recent competitive clash between the two sides – disregarding the 2-2 draw a week and a half ago, George Taft’s own goal, coupled with Harry Smith’s finish without a United reply earned Keith Curle’s Cobblers the three points at Sixfields en route to their eventual promotion via the playoffs in 2019.

David Amoo’s late, late goal won the U’s all three points at the Abbey back in January 2019, as Colin Calderwood’s side ran out 3-2 victors against the Cobblers.

U’s Head Coach Mark Bonner is expecting another tough encounter with Northampton Town: “Both sides will be determined to get into the next round of the cup, so it will be an interesting game. Cup football throws up different types of games sometimes, but we will find a good level because we want to be in the next round.

“We were a threat on the day from set-pieces, so we need to make sure we are as good again. Northampton however are a good side themselves from set plays, so we know there will be elements of that in the game.”

Jon Brady at Northampton is hoping for better performance against Cambridge United on Tuesday: “We lost our rhythm within the game on Saturday, and we weren’t as sharp on the ball as we usually are.

"We didn’t play the way we can play but even though we weren’t at our best we could have still nicked a draw when we had Fraser's header cleared off the line at the ebd.

“Many things on the day weren’t at the standards we’ve created and that includes our decision making and ball retention. We lacked aggression and a lot of the players who played were off their game.”

Darren Drysdale has been appointed as the game’s referee, with Stephen Finch and Nicholas Cooper coming in as the referee’s assistants. Anothny Da Costa will oversee the game as fourth official.

Tickets for the 7:45pm clash on Tuesday 16th November are available now at the following prices:

Buy your tickets online, over the phone by calling 01223 566500 or by visiting the Abbey Stadium Ticket Office during our regular opening hours.