Looking to bounce back following Saturday’s defeat at the Kassam Stadium, Mark Bonner’s men make the trip to Buckinghamshire to face Wycombe…

Despite both sides having just 12 games remaining in their respective seasons, it’ll be the first time United and the Chairboy’s have met this campaign – having seen Boxing Day’s clash at Adams Park postponed due to COVID-19, as well as the Abbey Stadium reunion rearranged due to United’s FA Cup run.

Tuesday night’s clash kicks off at 7:45pm, and if fans haven't already purchased their match tickets in advance, tickets will be available on the night at Adams Park at the following prices:

If you can’t make the game, Match Passes are available to buy now for just £10. The simplest way to do so is by clicking here and selecting the Wycombe Wanderers fixture. Either log-in to your existing iFollow account or create a free account by clicking ‘Register Now’.

In an emotional encounter at the Kassam Stadium on Saturday, celebrating the life of Oxford great Joey Beauchamp, Cambridge United’s run of two wins was ended after being pegged back twice either side of the half-time whistle before Cameron Brannagan and Matty Taylor sealed the win for the hosts.

Tuesday’s hosts head into the game having been beaten 3-2 by Accrington at the Wham Stadium, despite, much like the U’s, leading twice in the game. Sam Vokes had given the Chairboy’s the lead after just seven minutes before Sulley Kaikai restored Wycombe’s lead just 15 minutes later. However, second half goals from Ross Sykes and Harry Pell condemned Gareth Ainsworth’s side to their second defeat in as many matches.

The Chairboys’ rise through the English league system throughout the second half of the 20th century meant it took 130 years of association football for both sides to meet in 1993 – after being drawn to face each other in an FA Cup second round clash at Adams Park.

Wycombe would go on to win that afternoon, thanks to Jason Cousins’ second half goal, and have since enjoyed the share of spoils when it comes to overall head-to-head games.

Mark Bonner’s men will be hoping to end 21-year run on Tuesday Night, with the U’s not recording a win in Buckinghamshire since 2001.

The last time both sides met saw Paul Lewis cancel out Adebayo Akinfenwa’s opener in injury time, as the U’s salvaged an unlikely point against the eventually promoted Chairboy’s in 2018.

Who’s in the middle?

Following a two-week break, James Oldham will return on Tuesday night as the Derbyshire born referee head’s up United’s clash with Wycombe at Adams Park.

It’ll be the first time since the U’s 1-0 defeat against Cheltenham last season that they have been officiated by Oldham.

Oldham will be joined by assistants Ravel Cheosiaua and Joseph Stokes, with Samuel Ogles overseeing the game as fourth official.

“There are a lot of good teams in this league, and they’ve all got players that are capable of hurting you, as have we, we know that, but we also know every team we play against they’ll have plenty of threats.

“Wycombe have got a lot of power in the team and players that we are going to have to play very well against in order to contain them and defend against. They’re direct and are strong from set plays, and as always, we need to see how we can be a threat too.”

Despite the return of several key men, United were comfortably beaten by a Wycombe side looking to reignite their promotion hopes…

Wycombe asserted their authority on the game with two early goals before sealing the three points with five minutes to go, with United unable to muster up a response despite Ironside and Jones making their return to the side.

In reaction to Saturday’s defeat at the Kassam Stadium, Mark Bonner named three changes to his United team ahead of Tuesday night’s clash.

Lloyd Jones was named in the starting eleven for the first time since the defender hobbled off in United’s win over AFC Wimbledon at the Abbey back in November, while Ben Worman and Shilow Tracey also made a return to the team.

Much like in the previous two outings, Mark Bonner’s men started quickly, with Sam Smith almost giving United the perfect start after just four minutes, however, off-balance and slightly blind-sided, the striker was unable to make sufficient connection on George Williams’ long throw, and Chairboy’s stopper David Stockdale was able to comfortably gather.

Despite the fast start, it was the hosts who landed the first punch after 10 minutes when Daryl Horgan’s long-range strike, heavily assisted by Anis Mahmeti’s back, wrong-footed Dimi Mitov and bobbled into the net.

Just four minutes later, the hosts doubled their lead as good work from Anis Mehmeti saw the forward beat his man before teeing up Gareth McCleary to fire past Mitov from the edge of the six-yard-box.

United’s best passage of the first half followed the quick-fire double. With the pick of United’s chances falling to Smith, who was just unable to aim a header goalwards, following good work from Williams down the full-back's right.

Still on top, looking for a way back into the game, Shilow Tracey, looking threatening on his return to the side, sparked furious cries from United’s dug-out after the winger looked to have been caught in the area by the trailing leg of Josh Scowen – however James Oldham was having none of it.

Adam May, looking a frustrated figure, was the first to go into the referee’s book, following the midfielder’s late challenge on Josh Scowen.

With Wycombe looking impenetrable in the early exchanges of the second half, United were able to get some joy down George Williams’ right-hand side, as the full-back saw a long-range shot rebound out for United’s first corner of the game after 58 minutes.

Struggling to break down Wycombe back four, Mark Bonner turned to Joe Ironside and Jack Lankester in the 66th minute in hope of finding a way back into the game.

Ironside, making his return to United’s side was involved straight away, winning United a free-kick in an advanced position after being dragged down by Stewart, however the resulting free-kick petered out and the hosts were able to survive.

The game opened up as United went in search of a route back into the game, with substitute David Wheeler almost taking advantage of United’s attacking exploits, however the forward was guided out wide well by Jones before firing into Mitov’s side-netting.

The physicality of Joe Ironside was causing the hosts problems, and the striker so nearly marked his return with a goal in the 83rd minute after turning and shooting well, however Sam Vokes’ excellent goal-line clearance denied the striker.

United, who’d committed men forward, were punished in the 85th minute, as a breaking McCleary squared the ball to an unmarked Anis Mehmeti to seal the three points for the hosts.

Mark Bonner's men are back in action on Saturday when they host Shrewsbury Town at the Abbey Stadium - a game that is dedicated to Women's Football Weekend, with a whole host of activities and initiatives will be carried out during the day as we celebrate our female supporters, staff and players, whilst also raising awareness of the barriers and discrimination that Women continue to face when supporting or playing for their team. 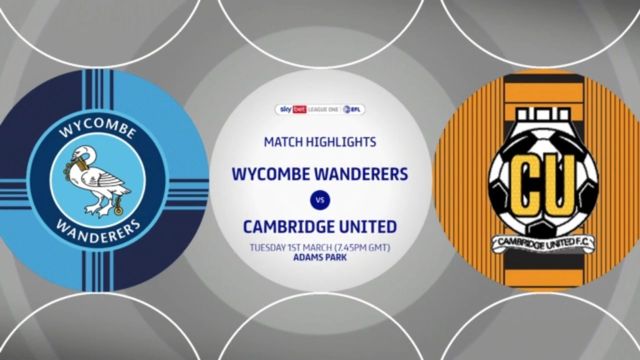 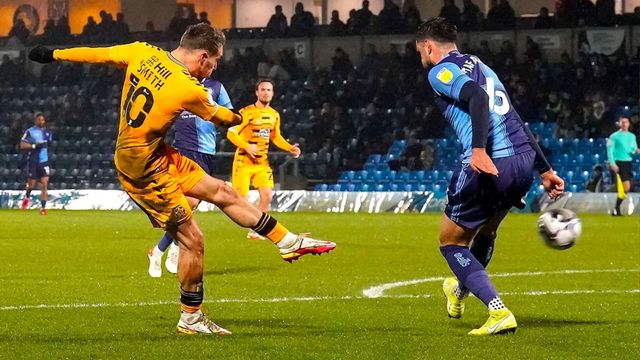