Having made an unbeaten start to 2022, including wins over Newcastle, Portsmouth, Lincoln, Doncaster and Crewe, a much-depleted United team once again impressed on Tuesday night – despite eventually being knocked out of the Papa John’s Trophy on penalties against Rotherham.

The host’s early pressure was rewarded after just nine minutes when Wes Harding fired past Dimi Mitov from the edge of the area. However, after starting on the backfoot, the U’s grew into the game and just three minutes before to the half-time whistle, Paul Digby latched onto a fine free-flowing United counter attack to slot home an equaliser.

Mark Bonner’s men did well to hold out for the second 45, following a barrage of Rotherham attacks before the game was ultimately decided from the spot, with the hosts converting all seven of the spot-kicks before Adam May was denied by Viktor Johansson.

Prior to Tuesday’s game, the U’s made it three League One wins on the bounce after seeing off Crewe Alexandra at the Abbey Stadium. Adam May’s brilliantly dipping shot from the edge of the area ensured all three points would stay in Cambridgeshire.

Fleetwood Town, rejuvenated under the stewardship of Stephen Crainey, have picked up points in three of their last four League One outings. Most impressively winning 1-0 against promotion chasing Rotherham United a fortnight ago, condemning the Millers to just their fifth league defeat of the season.

U’s Head Coach Mark Bonner mentioned the Cod Army’s impressive record at coming back in games as well as scoring late goals, which proved to be the case on Tuesday night.

Plymouth seemed to have the points sewn up with 88 minutes on the clock after Neil Ennis had given the Pilgrims a 3-1 lead just ten minutes prior, however an 89th minute goal from January signing Ellis Harrison, as well as Antony Pilkington’s dramatic injury-time equaliser salvaged a deserved point for Stephen Crainey’s side – having dominated for large portions of the game before going behind.

Fleetwood’s impressive rise throughout the 21st century means the U’s have only clashed with the Cod Army on just six occasions, with neither side being able to boast a better record – winning two games apiece.

Memories of September’s reverse clash may be fresh in fans’ memories going into Saturday’s game, with both sides playing out an entertaining 2-2 draw at the Abbey Stadium.

The U’s last win against Fleetwood came in the 2014/15 FA Cup – a run in which Richard Money’s side would eventually be knocked out by Manchester United in a Fourth Round replay. Kwesi Appiah’s strike, ten minutes from the final whistle was enough to set up a Second Round tie against Mansfield Town.

Cambridge United Head Coach Mark Bonner on Fleetwood Town, “They were tough opposition when we drew with them at home earlier in the season. They certainly have a good record of scoring late goals and coming from behind in games.

“I remember thinking at the time that they were in a position that they wouldn't stay in, but they’ve had some difficult times in the early part of the season.

“They've changed their manager and they've been on a good run in recent weeks. They’ve also recruited well this window, having lost James Hill.”

Stephen Crainey speaking before Saturday’s clash said, “I’ve watched their last couple of games, and they’ve got a lot about them; they’ve got a bit of physicality, the like to get the ball down and play when you let them, so we are looking forward to the game. We have started planning for it so hopefully, we can get the game plan right and end up on the right side of the result.”

Rebecca Walsh has been appointed as referee for Saturday afternoon’s Sky Bet League One clash between The U’s and Fleetwood Town at Highbury Stadium.

She will be assisted by Christopher Ward and Mark Cunliffe. The fourth official will be Andy Haines.

Kick-off at Highbury is at 3:00pm, with advanced tickets no longer available to be purchased, however tickets will be available on the door on the day at Highbury. Priced at the following:

Wes Hoolahan’s goal direct from a corner gave the U’s the lead at the midway point of the second half, but Paddy Lane struck back less than 10 minutes later to ensure a share of the spoils.

Mark Bonner named three changes to the side that were knocked out of the Papa John’s Trophy on Tuesday, as Jack Lankester, Wes Hoolahan and Jack Iredale all returned to the starting line-up.

Taking place on a cold, gusty atmosphere by the coast, the home side had the wind behind them in the first half and looked to make the most of it as they reined shots down on Mitov’s goal.

Paddy Lane had their first effort just a minute in, but saw his strike blocked behind by Okedina for a corner. Josh Harrop’s debut for Fleetwood was fleeting, as he was forced off with injury after just two minutes.

The home side should have taken the lead five minutes in as Clarke’s back-post run from a Fleetwood corner went unchecked, leading to a free header from just a few yards out, which Mitov managed to prevent from finding the net.

Fleetwood were clearly looking to test Mitov with high winds behind them on a bobbly pitch, but were faced up against an in-form goalkeeper in Mitov who judged a well-hit strike from Andrews well to turn it away.

United’s best attacking moment came 13 minutes in as Digby drove the team forward before Hoolahan played in Brophy, who took it past his man and to the by-line, before seeing his cross for Smith cut out just in the nick of time.

In a game that lacked quality throughout much of it, Carl Johnston showed some just after the half hour mark with a teasing delivery that just avoided two Cod front-men before landing just past the post.

There was a real moment danger for the U’s on 38 minutes as Shayden Morris beat Dunk to a loose ball in the middle of the park, allowing him to him run through into Mivo’s area, but his cross was well defended by Iredale who inadvertently deflected the ball into the safe hands of his goalkeeper.

May was booked a couple of minutes later for preventing Harrison from breaking into the U’s half with a trip from behind, as the hosts looked like the most likely scorers at that stage of the match.

Just before the half though, Williams forced Cairns into his first save of the game, as the full-back cut inside to strike towards goal on his left-foot. Despite initially fumbling the stop, the Fleetwood goalkeeper managed to get back on top of the ball before Smith could turn in the rebound.

The two sides went in level at the break after a largely attritional first half of football.

Dunk almost got the U’s off to a flyer to start the second half, as Brophy’s deft pass found his inside run before the full-back in his testimonial year unleashed a powerful effort that stung the palms of Cairns.

Although chances continued to come at a premium, United had more control of the contest after the break and with the wind in their favour, asked more questions of the Fleetwood defence.

On 66 minutes, the breakthrough came and unsurprisingly, it came from a set piece as Hoolahan’s corner caught everyone out to find the net at the near-post, for his first goal of the season.

Fleetwood came back strong though and got the equaliser seven minutes later through Paddy Lane, who struck a fine hit from 20 yards to beat Mitov and find the top corner.

It was opportunity missed for United with just over 10 minutes remaining, as Brophy burst through the centre of the pitch to leave a two-on-one in United’s favour as he offloaded the ball to Hoolahan, but the Irishman went for an instant return pass which was cut-out by the lone Fleetwood defender.

When Okedina fouled Pilkington from 25 yards it presented Fleetwood captain and free-kick specialist Andrew the opportunity to do what he does best, but he was unable to keep the ball down as the U’s breathed a sigh of relief.

With time ticking down, the home side appeared nervous in their possession at the back and United almost pounced as they won the ball back high up the pitch before Hoolahan fed Digby, who could have scored his second of the week but fired right down the throat of Cairns.

There was to be one final chance for the home side to take all three points, but Harrison's goalbound shot deflected off Pilkinton and landed just the wrong side of the post. Next up, United head back up to the North West on Tuesday night to face Bolton Wanderers. 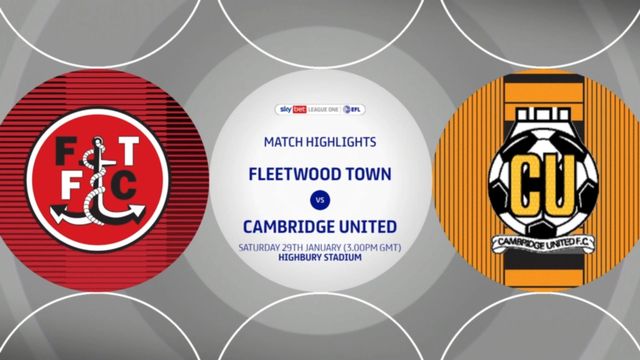 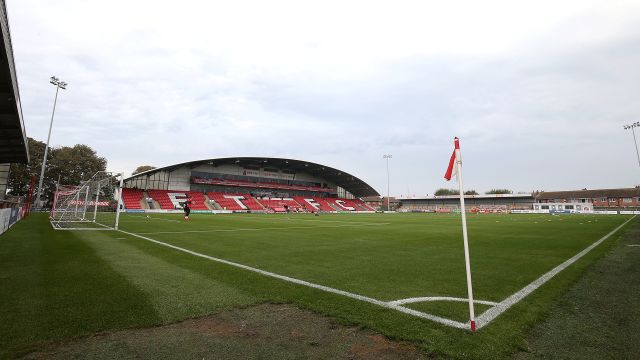