Despite continued injury problems forcing Mark Bonner into making three changes from the side that beat Accrington on Saturday, the U’s made light work of promotion chasing Plymouth at the Abbey on Tuesday night.

Sam Smith scored his 15th goal of the season after lifting Liam Bennett’s through ball over Cooper and into the net after just seven minutes, before Jack Lankester’s first United goal since arriving from Ipswich Town in the summer sparked controversy following Conor Grant’s tumble in the lead up to the goal two minutes before the interval.

Tuesday’s win over the Pilgrims saw the U’s further increase the gap between themselves and the bottom four, as Mark Bonner’s men edge closer to securing another season in England’s third tier.

Oxford, looking to better last season’s play-off finish, welcome the U’s on Saturday having successfully navigated their way through away trips to Charlton and Crewe, ending the week in fourth and as the division’s top scorers – having scored 61 goals in 34 outings this campaign.

Left back Ciaron Brown took just four appearances to fully announce hismself at the Kassam Stadium, having arrived from Cardiff City on deadline day, after scoring the decisive goal in the U’s 1-0 win over Crewe Alexandra on Tuesday night.

Prior to Tuesday’s, Karl Robinson’s men hit Charlton for four at the Valley, with Matt Taylor (x2), Sam Baldock and Cameron Brannagan all on target as United boosted their play-off hopes.

For the third time this season, the U’s and Oxford will lock horns, having met in this season’s domestic season curtain-raiser at the Abbey, before clashing in the group stages of the Papa John’s Trophy.

Joe Ironside was on hand to earn Mark Bonner’s side their first point back in the third tier for almost two decades when the striker fired home from the spot to cancel out Steve Seddon’s opener 12 minutes before time on the opening day in August.

More recently, Smith’s brace, coupled with goals from Harvey Knibbs and 16-year-old Kai Yearn set the U’s up in good stead in their eventual qualification from Group H (Southern), when the U’s saw off Oxford at the Abbey, winning 4-1 on the opening night of the Papa John’s Trophy.

Fans may remember United’s 5-1 rout of Oxford in 2014, with Kwesi Appiah, Ryan Donaldson, Tom Elliott and Robbie Simpson all on target in a memorable win for Richard Money’s side.

“They’re a great side, I think Oxford away is one of the most challenging games of the season. We’re excited to see how we can get on going there.

“It’s a big challenge because they’re such a good side, and they’ve been a really good side for a few seasons now so we’re looking forward to the challenge.

“The dimensions of their pitch is bigger an others, and Karl Robinson’s sides always tend to stretch the pitch as wide as they possibly can.”

Charles Breakspear has been appointed as referee for Saturday afternoon’s Sky Bet League One clash between The U’s and Oxford United at the Kassam Stadium.

He will be assisted by Louis Marks and Ryan Whitaker. The fourth official will be Joe Clark.

Kick-off at the Kassam Stadium is at 3:00pm on Saturday 26th February, with tickets only now available for fans to buy on the day in Oxford. Tickets are priced at the following:

International U’s will be able stream the action live with an iFollow Match Pass. Match Passes cost £10 and are available to purchase by clicking here. Domestic supporters who can't make it to the Kassam can listen to live match commentary on iFollow.

Cambridge United were edged out 4-2 by Oxford United in a topsy-turvy Sky Bet League One encounter at an emotional Kassam Stadium...

Sam Smith extended his sizzling tally to five goals in four games after his clinical second of the afternoon cancelled out Matty Taylor’s equaliser before the break. However, the hosts capitalised when on the front foot courtesy of Cameron Brannagan’s brace either side of Sam Baldock’s attempt. A defeat, but a valiant one at that for the U’s, who are situated in 13th.

Mark Bonner named two changes from the side that fired on all cylinders in their win over Plymouth Argyle in midweek – Wes Hoolahan and Harrison Dunk returned to the fold whilst Liam O’Neil and Liam Bennett occupied the bench. Joining them was Lloyd Jones, back in the matchday squad for the first time since late October.

After showcasing an emotionally touching tribute prior to kick-off celebrating the life of Oxford legend Joey Beauchamp, the stadium was fired up ahead of an enticing clash between two sides in mirroring form after picking up consecutive wins and clean sheets. The division’s top goalscorers after plundering 61, the hosts were allocated in 4thand eyeing up promotion. A third shutout on the trot was the objective for the visitors, boasting an impressive feat of two defeats in ten as they embarked on a top-half finish.

After being forced to clear their lines, United carved out the opener on the 5th minute with their first foray forward. A deep cross was pounced at by Paul Digby who found Smith outside the six-yard box - the striker was on hand to coolly slot home against his former club.

In response, Oxford piled on the pressure with quickfire attempts that kept the visitors’ backline compact. On 15, Herbie Kane curled a free-kick from 20 yards that dropped inches over Dimitar Mitov’s crossbar. Looking to carve the U’s open moments later, Taylor was denied before he could pull the trigger inside the box from Dunk’s recovery.

Creative in possession and switched on out of it, Cambridge were presented with some good attempts on the half an hour mark when George Williams finished off a counter attack by lashing the side netting from a tricky angle and Jack Lankester tested his luck from range which Jack Stevens comfortably collected.

The hosts’ persistence in good positions came to fruition on the 35th minute when they nestled the equaliser. A Sam Baldock flick fell towards the path of Taylor who stabbed home from close range to cue a fitting celebration.

Digby, who had tiptoed to advanced positions frequently, fired a header from a tight angle and Lankester’s fierce attempt was blocked in the dying embers of an end-to-end first half which had been frantic at times but one Bonner’s men would be pleased with thanks to their moments of control.

Excellent link-up play down the left from James Brophy and Dunk on 51 resulted in the latter crossing towards Williams who couldn’t get his angles right as it flew wide.

Despite being camped back into the final third, the U’s took the lead for the second time with a defence-splitting move. Livewire Hoolahan picked out top scorer Smith who marauded forwards and expertly dispatched past Stevens for his 17th goal of the campaign.

The lead lasted only eight minutes after Ryan Williams’ low ball from the right flied towards Brannagan who thundered past a helpless Mitov from 15 yards.

On the 69th minute, both sets of supporters witnessed a golden opportunity for their side in the space of virtually seconds. Smith, a thorn in Oxford’s defence, almost headed in his hat-trick after getting on the end of Hoolahan’s intricate cross – but Stevens denied it with an applaudable save. Scampering up the other end, Taylor forced a vital stop from Mitov with a venomous shot.

Oxford found themselves in front for the first time this afternoon on 72 when Mark Sykes generated space deep down the right flank and delivered a teasing cross that was met first-time by Baldock and into the net.

The visitors’ endeavour to claw something back was evident – unleashing a triple substitution to keep Oxford alert. However, the game was killed off on the stroke of added time when Brannagan, in a similar position to previous, cannoned home when in acres of space to ensure maximum points in tribute of Beauchamp. Ultimately, United were overpowered by a strong unit – despite a committed performance which they can take heart from.

It’s a quick turnaround for the U’s who hit the road again on Tuesday night (1st March) as they travel to Adams Park to take on another promotion chaser in Wycombe Wanderers – be sure to back the boys. 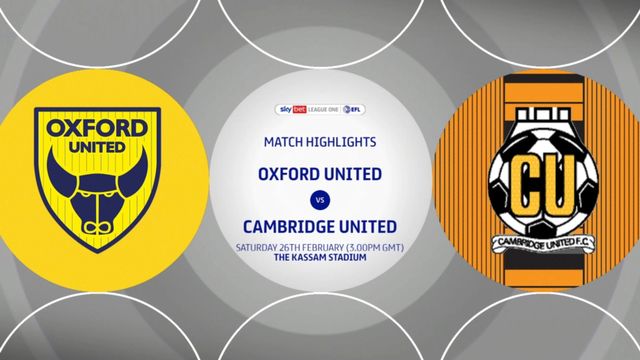 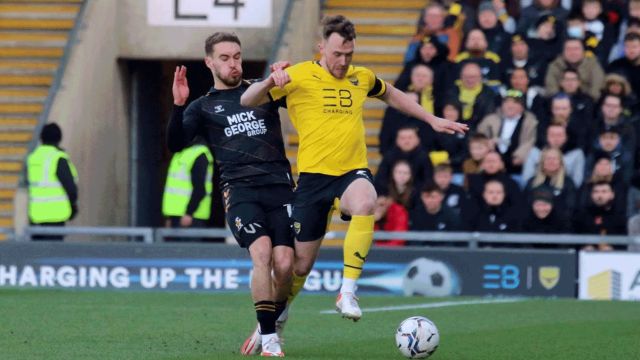