Prior to Tuesday’s game, the U’s were unable to salvage a point against Sunderland. Sam Smith had originally cancelled out Alex Pritchard’s opener midway through the first half, before Nathan Broadhead sealed the three points for Lee Johnson’s side with a thunderous effort from 25-yards.

Having lost only four games in their opening 24 games in all competitions, Matt Taylor’s Grecians will certainly head to the Abbey Stadium without fear. Their previous outing saw the South Coast side secure their tie against the U’s thanks to George Ray’s 81st minute goal completing a comeback win over Bradford City.

Ray was again on the scoresheet as Exeter and Rochdale shared the spoils in their previous League Two outing, with the former Crewe Alexandra man giving Matt Taylor’s side the lead midway through the second half, before being pegged back by Max Taylor just ten minutes later. The draw saw the Grecians remain in League Two’s automatic promotion spots. 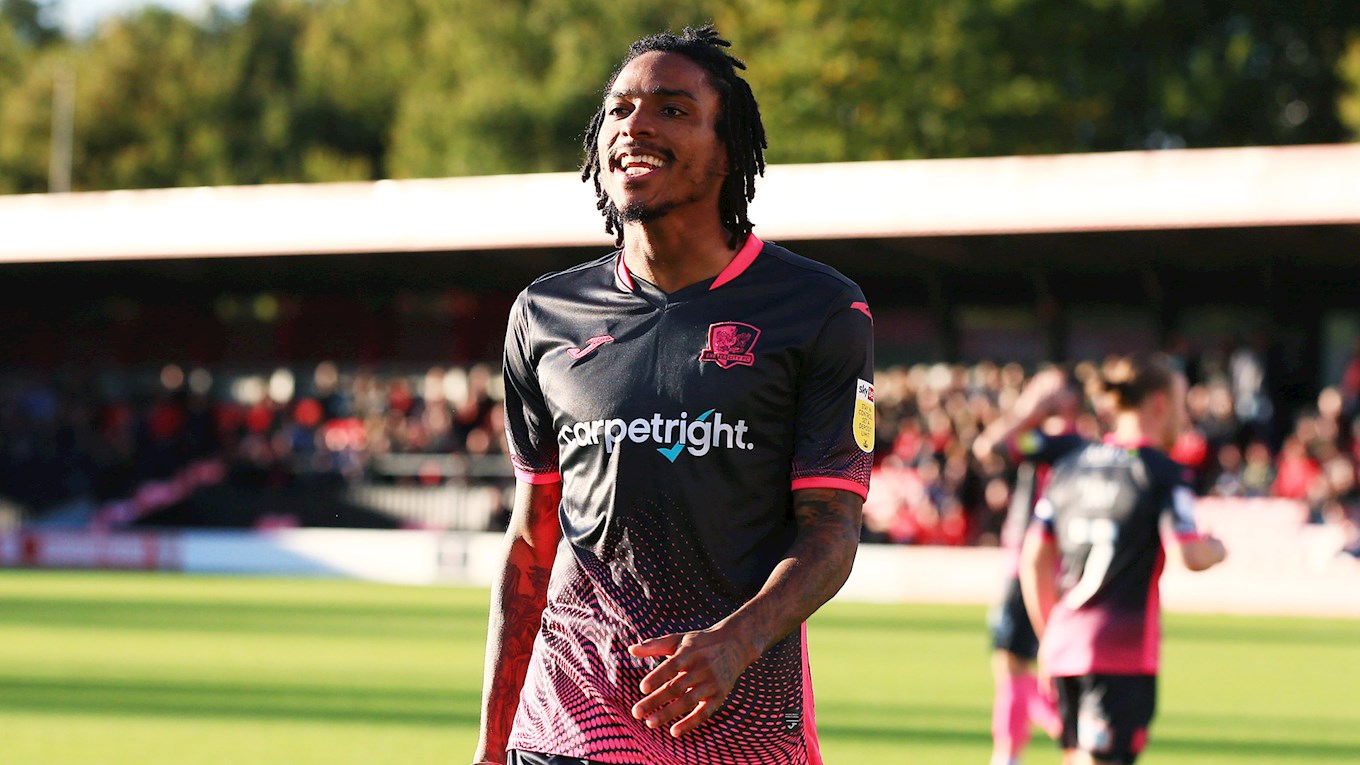 U’s fans are no stranger to winger Jevani Brown, having seen former Jamaica youth international don the Amber and Black colours of Cambridge United on 85 occasions prior to making the switch to East Anglian counterparts Colchester United in 2019. The former Peterborough man showed glimpses of his undoubted talent while at the Abbey and looks to have finally stepped up this season in League Two, contributing six assists in 17 games this season in the fourth tier, a stat only bettered by Jamille Matt of Forest Green.

Saturday’s visitors Exeter City head to the Abbey on Saturday having won all four of their last four games against the U’s, with Matt Taylor’s side most recently completing a League Two double over Cambridge United last season. Despite the wins however, it was Mark Bonner’s side who would ultimately have the last laugh, finishing ten points and seven places above the Grecians, as the U’s sealed their promotion to League One.

Then United loanee Sam Smith’s 93rd minute effort forced the tie to be settled at St. James’ Park, after Alex Fisher had given Exeter City the lead after 11 minutes. Matt Taylor’s side would eventually progress however, with Alex Fisher again on the scoresheet as the Grecians ran out 1-0 winners in the replay.

Just a month prior to the two sides meeting in the FA Cup in 2019, United had enjoyed a 4-0 win over Exeter, with Luke Hannant, Jack Roles, George Taft and Andy Dallas all scoring in a comfortable win for Joe Dunne’s U’s.

U’s Assistant Head Coach Gary Waddock is expecting a tough test against the Grecians on Saturday: “We know how good they are you from last season; they are good outfit and obviously this year they are in good form as well. It is a tough opponent that we are up against, but we are going into the game looking to try and get through.

“Matt [Taylor] and his backroom staff have done an excellent job, they develop players along the way as well but also pick up results, so credit to them and we know we are in for a tough afternoon come Saturday.”

Matt Taylor says there’s no pressure on his Exeter side ahead of their game against Cambridge United on Saturday: "We prepared for this game a little before Tuesday, just in case. We are going to face a League One side away from home and there's no pressure on us in relation to that.

"We're going to go there and give it a really good go. I've watched as many games of theirs in the last 24 hours as I can - against Wigan, Sunderland and Sheffield Wednesday, so we know what we're up against.

"If we put out our best, we will have a chance."

David Rock will take charge of Saturday’s clash at the Abbey Stadium, with Paul Yates and Darren Blunden being appointed as the game’s assistant referees while Fourth Official Daniel Cook will oversee the game from the touchline.

Tickets for the 3pm fixture are available online, over the phone by calling 01223 566500 (option 1) or by visiting the Abbey Stadium Ticket Office.

Cambridge United marched towards the Emirates FA Cup Third Round with a thrilling 2-1 victory over Exeter City at the Abbey Stadium...

An early Sam Nombe penalty was cancelled out by a thunderous Adam May strike to conclude an end-to-end first period – which proved to be the calm before the storm. In an absorbing second half, Harvey Knibbs produced delirium at the death to help allocate the U’s in the velvet bag for Monday’s much-anticipated draw.

Mark Bonner ringed nine changes to the youthful side that prevailed over Walsall in midweek. Jack Iredale and Jubril Okedina were the only ones to retain their places as the XI was shuffled. Included from the off was Shilow Tracey - making a first start since the trip to Northampton Town in the First Round.

Looking to infiltrate the Third Round of the competition for the first time since 2017, the U’s approached the clash on the back of a four-game winless run in their respective division – but would take heart from convincing cup showings. Nonetheless, a stern clash awaited against a Grecians side dubbed as a real bogey team for United after a winless run of five against the Devon outfit, including a meeting in this competition as recently as 2019. Stabilised and hard to beat under Matt Taylor, the visitors were situated in 3rd in League Two - losing just twice. Firing on all cylinders, they edged past Bradford City in midweek at the third time of asking to set up an arduous clash.

An energetic start saw the majority of the action in the visitors’ half. A sublime cross down the right from George Williams was towards a lurking James Brophy on the outskirts of the six-yard box, but nobody was available to poke home his pass on the 3rd minute.

The U’s were dealt a major blow on the 9th minute when the Grecians took an early lead from 12 yards. After racing into the box, Nombe was brought down by Jubril Okedina. Calm and collected from the spot, the striker sent Dimitar Mitov the wrong way.

10 minutes later, Matt Taylor’s men were agonisingly close from extending their lead after a well-worked attempt. A pinpoint delivery from Jevani Brown was met by Josh Key – who turned his head but couldn’t twist it goalbound as it trickled wide of the left post.

Nonetheless, the U’s capitalised on a neat attack by drawing level on 22. Crafted by James Brophy, the winger twisted and turned before the ball was slotted on a plate for May who blasted home a ferocious attempt from the edge of the box.

With their tails up, United were in the ascendency and terrorising their opponents at every foray into the final third. On the 25th minute, Tracey picked the ball up from 20 yards and unleashed a menacing attempt that was drilled whiskers away from securing a rapid turnaround. George Ray was on hand moments later, putting his body on the line to prevent an inspired Williams from converting after the full-back cut inside the middle.

In an end-to-end period, the Grecians slashed the post on the 42nd minute after Brown teed up Matt Jay from outside of the box, with the top scorer firing the ball against the bottom of the post beside a full-stretched Mitov.

The last attempt of the half fell to the way of the hosts when Wes Hoolahan’s teasing cross was met by Williams - whose free header was gobbled up by Cameron Dawson. It concluded a tense first 45 with the visitors, the more assuring of the sides, letting the U’s off after ruing some missed opportunities.

United added further tenacity to their game after the break and were unlucky not to fire in on the 48th minute. Tracey played in May who delicately chipped into the path of an onrushing Hoolahan, the attacking midfielder bided his time with several touches inside the box but was prevented before pulling the trigger.

A golden chance occurred two minutes later after Nombe dispossessed United in the middle of the park and executed a defence-splitting pass to Brown who, in a one-on-one position, blasted wide of the crossbar.

A scare was dealt at the other hand on the 55th minute when Ironside was played in and beat his man in a good position before Ray retaliated by almost slicing into his own net after blocking the attempt.

The chance of the match fell to Sam Smith on 80 when Ironside slipped in the in-form attacker. Onrushing towards Dawson, he went for placement but it fell excruciatingly wide of the post.

Throwing the kitchen sink, they went even closer two minutes later when substitute Conor Masterson lashed against the post after the ball fell to him from a long Iredale throw.

Delirium was produced at the death when Knibbs poked home Hoolahan’s exquisite long cross on 87. Celebrations were originally halted when the linesman flagged for offside, but the decision was overturned to cue delight in front of the Main Stand.

To the Grecians’ credit, they responded by handing the hosts with a barrage of pressure in the final third. Padraig Amond was denied from eight yards by an outstanding save from Mitov, who smothered the low attempt. Deep into injury time, Brown was played in by the aforementioned attacker but the former-U couldn’t generate the power as Okedina valiantly cleared his lines.

With the last kick of the game, the U’s were awarded a penalty by referee David Rock after Jensen Weir was fouled. Ironside missed the attempt, but it mattered little – the damage was done. United had ensured a successful week of resolute cup progression.

Man of the Match: May