Sam Smith and Joe Ironside’s 18th and 15th goals respectively mathematically secured Cambridge United’s place in League One next season, after seeing off Morecambe at the Abbey last Saturday.

Tickets for Saturday evening’s 5:15pm clash at the DW Stadium are still available for fans to buy, however fans can only do so on the day from the Wigan Athletic ticket office (cash only), priced at the following:

For those not making the trip, the match will be shown live on Sky Sports Main Event, Sky Sports Football and Sky Sports UHD, with coverage from the DW Stadium starting at 5pm.

The Latics can all but secure promotion to the Championship with a win against the U’s on Saturday, with all three points, depending on Rotherham’s result against Ipswich, potentially stretching Wigan’s lead over 3rdplace to 10 points.

Leam Richardson’s side head into Saturday’s clash having gone the previous nine games undefeated in League One, their second longest undefeated run of the season.

Despite not being able to break down a resolute Brewer’s defence on Tuesday, the Latics stretched their gap between themselves and third placed Rotherham to seven points, after the Millers were comfortably beaten by Portsmouth.

How the U’s go into Saturday’s clash:

Goals from Sam Smith and Joe Ironside, either side of Cole Stockton’s equaliser helped Mark Bonner's men to a 14th league win of the season and with just four games to go, the goal is now to secure a top half finish to complete a remarkable first season back in the third tier.

Having played the last two in front of the Abbey crowd, Saturday’s clash will be United’s first away from home since they sealed a memorable 1-0 win over then play-off chasing Ipswich at Portman Road.

George Williams is expected to be fit to face Wigan on Saturday, with the boss confirming the fullback had been in training all week after missing last weekend’s clash with Morecambe.

However, Sam Sherring’s season may have come to a premature end, after the defender hobbled off on Saturday, “Sam Sherring isn’t looking so good, we had a scan on Monday and it didn’t return too well for him, so he’ll see a specialist next week – so he’ll definitely miss the next two games.

“Until we get past the Charlton game on Tuesday, we won’t know whether he will be able to contribute to the season anymore.”

November’s Abbey clash saw Cambridge United and Wigan meet competitively for the first time in almost two decades. Andy Liddell’s second half hattrick sealed all three points for the Latics in a 4-1 win at the then named JJB Stadium back in 2002.

November’s clash saw U’s head coach Mark Bonner celebrate his birthday with a point against the Latics, however it could have easily of been all three. Joe Ironside and Adam May had initially given United a two-goal lead before Will Keane and Callum Lang salvaged a point for the visitors in the final 10 minutes.

Saturday’s hosts Wigan boast a historical advantage over the U’s, having won five of the 15 clashes between both sides, three better than United’s two wins.

Ross Joyce will referee Saturday afternoon’s game at the Abbey, having previously overseen Charlton Athletic’s  1-0 win over Rotherham United in League Two a week ago.

It will be the first time since the U’s 1-0 defeat to Stevenage last season that Joyce has taken charge of one of United’s games.

Joyce will be joined by assistants Matthew Smith and Joe Clark ahead of Saturday’s clash, with Tom Neild being appointed as the game’s fourth official.

A tremendous and enterprising first half saw goals from Knibbs and Smith put United in a commanding position at the break and despite Naylor’s header making for a nervy ending to the contest, the U’s stood firm to see out the result and move into the top half of the table.

Mark Bonner names three changes to the team that beat Morecambe last Saturday, as George Williams, Adam May and Jubril Okedina returned to the starting eleven.

United quietened down what was a rocking DW Stadium just before kick-off, with a really strong start to the game. The first chance came just four minutes in, Lloyd Jones rising highest at the back-post from an Adam May corner only to plant his header into the side netting.

It was all U’s during the opening 20 minutes with Mark Bonner’s men looking particularly dangerous from set-pieces. With 14 minutes on the clock, May’s corner was floated towards Ironside at the far-post, but after heading back across goal for Williams, the full-backs header was somehow denied by a defending Latic who got in the way to prevent the goal.

The league leaders began to increase their threat and should have gone ahead with 20 minutes played, as Keane failed to make contact with Magennis’ teasing low cross along the six-yard box.

Five minutes later, Wigan’s Lang found himself in the referee’s book after attempting to win a penalty under the non-challenge of Iredale, but referee Ross Joyce was in the right place to identify the simulation and show him a yellow card.

The U’s took a deserved lead with just over half an hour played, as Ironside took down a raking cross-field pass from Okedina before fighting off a couple of opposition defenders and laying it into Knibbs’ path, who did brilliantly to take a touch inside and fire under Amos in goal.

The lead could have been doubled just a minute later, as Adam May stung the palms of Amos with a fierce strike from outside the box. Following last weekend’s confirmation that the U’s would be playing in Sky Bet League One next season, United were playing with freedom and confidence whilst the home side appeared to be playing with an anxiousness that can come towards the tail-end of a promotion race.

As the game approached half-time, the U’s did indeed double their lead and it came through a stunning team goal, as Sam Smith applied the finishing cross to Brophy’s cross, planning his header into the top corner. Dreamland for United who went into the break two goals to the good.

Although comfortable at the time, past-experience meant that Mark Bonner’s men couldn’t rest on their laurels, after Wigan came back from 2-0 down at the Abbey earlier in the season to rescue a 2-2 draw.

Whilst the home side did improve during the second half, United were able to keep them at arms-length with very little danger presented in-front of Mitov’s goal.

Despite some considerable pressure, the Latics were unable to create any chances of note or test the Bulgarian as United’s defence stood form.

Liam O’Neil replaced Harvey Knibbs with just over 20 minutes remaining, who came off to a terrific ovation from the travelling 348 supporters after another superb shift.

With 77 minutes played, the stadium came alive as the hosts halved the deficit with a bullet header from Naylor to set up a grandstand finish.

Looking for a fresh outlet, Shilow Tracey came on for Sam Smith shortly after the goal and the game could have been put to bed when Williams connected well with another of his trademark near-post headers, but Amos was in position to palm the ball away. Wigan only managed to clear the ball into the path of the on-rushing O’Neil, who fired over with the goal at his mercy.

Ironside should have sealed the victory in added time with a glorious chance to find the net and it was almost déjà vu against the Latics again as with just seconds to spare, Mitov pulled off a remarkable save to deny Keane from point-blank range before Magennis was unable to keep his follow-up effort on target.

The latest in a long line of famous victories for the U's this season, with Charlton Athletic next on the horizon as they visit the Abbey on Tuesday in the penultimate home game of the season. 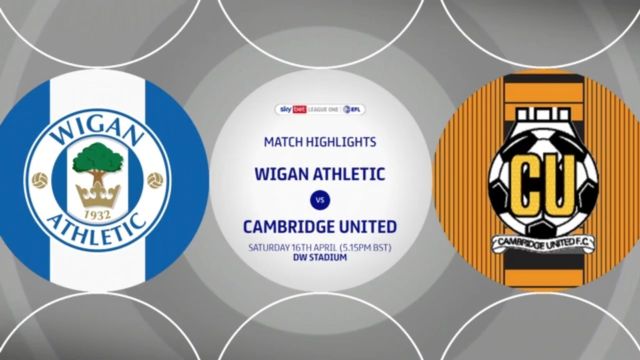 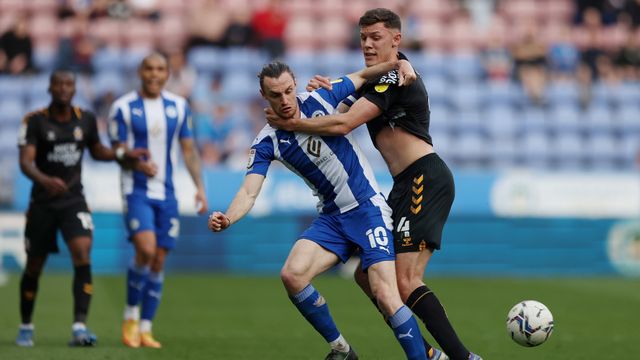