Cambridge United thumped Morecambe 0-5 at the Mazuma Stadium, to continue their excellent start to the 2020/21 Sky Bet League Two season.

Wes Hoolahan’s stunner on 28 minutes got United off the mark before an own goal and Adam May’s first for the Club opened up a three goal lead in the first half, before a brace from Paul Mullin completed a demolition job from United, who moved top of the division.

Mark Bonner made just one change to the side that had beaten Carlisle Unite in the opening League Two match of the season, with Adam May starting in place of the injured Liam O’Neil.

United were dealt an early scare when Carlos Mendes-Gomes carried the ball through the U’s defence and pulled a pass back for Liam McAlinden, who dragged a shot across Mitov’s goal from a positon where he ought to have done better.

Bonner’s men heeded the warning and immediately created threats of their own. Joe Ironside was a touch unfortunate not to see his shot from ten yards deflect into the Morecambe net, with the ball looping over Shrimps keeper Jake Turner but the wrong side of the post.

Paul Mullin was as ever a real nuisance, and had the U’s first shot on target when cleverly nudging his marker out the way to create enough room to dig out a shot one on one, which Turner saved low at his feet.

Mitov produced a stunner of a save at the other end on 12 minutes, reacting with incredible pace to tip over a header by Davis at close range.

From there though United took control of possession and began to dictate the pace of play. And on 28 minutes the U’s marked their authority of the game onto the scoreline and in stunning fashion. Wes Hoolahan, who had already displayed his high level passing ability, was perfectly placed to pick up a loose clearance from the Shrimps box and laced a unstoppable shot past Turner to register his first for the U’s.

Bonner’s men kept their foot firmly on the gas, and Paul Mullin took it upon himself to raise the stakes for the best goal of the afternoon. The striker worked room wide right with a neat cruyff turn, before curling a shot with the inside of his left boot which clattered the post and rebounded in off Turner for United’s second. Unfortunately the goal went down as an own goal.

And a devastating seven minute spell by the visitors was rubber stamped with a third, as Adam May hammered in a low strike from 20 yards, which nestled into the bottom corner to give the U’s an even clearer advantage.

Robbie Cundy was a width of the ball away from extending that to four moments before the break, but powerful header on the end of Hoolahan’s set piece delivery missed its mark by a fraction.

The U’s returned after half time and were clearly not intent on settling for what they’d already produced. It took less than ten minutes for Mullin to extend the advantage to four, with a typical poachers finish at close range, after Ironside had caused havoc at the Shrimps back post from a Hoolahan corner.

The striker continued to show a deadly instinct and finished off the U’s fifth with aplomb on 65 minutes, casually knocking the ball past Turner after a quickly taken free kick from Hoolahan and an excellent pass through from Hannant.

Harvey Knibbs went close in the final quarter of the match lifting a chipped attempt on to the roof of the Shrimps’ net, but nevertheless United could depart the Mazuma Stadium thrilled with their afternoon’s work. 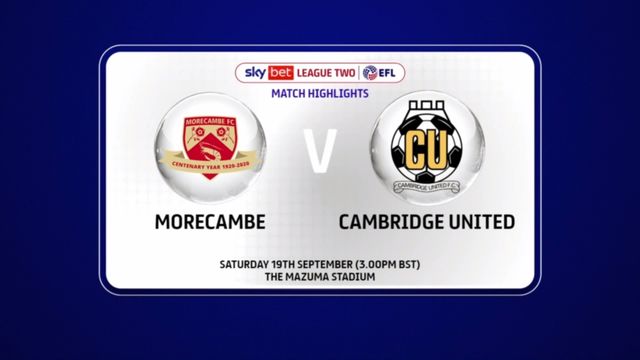 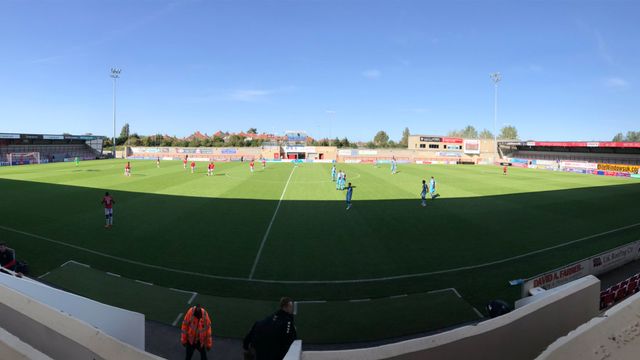