Cambridge United did the damage from 12 yards, as the U’s picked up another three points on the road with a 0-2 win over Walsall in Sky Bet League Two

A pair of penalties from Paul Mullin and Joe Ironside in either half were enough for United to secure their third away win of the season and stretch their unbeaten run of games to five in the League.

The U’s made four changes for the fixture with Robbie Cundy, Leon Davies, Adam May and Joe Ironside moving into the starting eleven. Mark Bonner was without Paul Digby for the first time in the season, with the midfielder having taken a blow to the head four days earlier.

Ironside, making his first start in three games, had the first opening on three minutes, flicking a header goalwards from a Harrison Dunk cross which Liam Roberts managed to get a grip of in the Walsall goal.

It was that man Paul Mullin who broke the deadlock again for the U’s, and once more it would be from 12 yards after Luke Hannant had driven into the Walsall box and been caught late in a challenge by Liam Kinsella to win an eighth minute penalty. Mullin stepped up and despite Roberts making contact couldn’t stop the striker scoring his 12th goal of the season.

Having now broken his best goalscoring tally for a season, the striker was hungry for more and found himself on the end of Kyle Knoyle cross ten minutes later, which he wasn’t quite able to crane his neck enough to keep his header underneath the cross bar.

United most certainly would have had a second were it not from a fine save by Roberts to deny a well-controlled effort by Luke Hannant, with the United winger powering Leon Davies’ cross through the box goalwards on 28 minutes.

The U’s did well to recover from a slightly hairy moment just after the half an mark, tracking back in good numbers after giving the ball away cheaply in midfield, to block an initial shot by Caolon Lavery from 20 yards before shepherding Wes McDonald into a wild lash which cleared the target by a considerable distance. It proved Walsall’s best opening, despite United having to withstand a late spell of pressure at the end of the half.

The Saddlers returned after the break and took control of possession as they looked for a leveller in the match. But Mark Bonner’s side remained a threat on the counter attack, and still posed a danger from set pieces. Ironside wasn’t quite able to stretch out a toe to meet Luke Hannant’s curling free kick to the back post on 58, which had got the better of Roberts in the Walsall goal.

Liam Roberts clawed away a Paul Mullin shot from his bottom right corner on 65 minutes, with the U’s striker denied a second of the game before being replaced by Jack Iredale, as Mark Bonner looked to sure up the U’s to see out the win.

And that they did, even increasing their winning margin with ten minutes to play. Kyle Knoyle’s cross caught the hand of Hayden White, and with Mullin absent from action up stepped Joe Ironside to coolly send the keeper the wrong way from 12 yards. 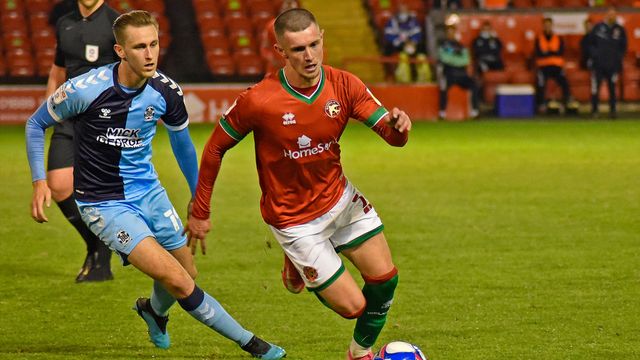