After two very different, but ultimately disappointing attempts to seal promotion, United still have control of their fate, knowing that a point or three would be enough to earn a return to Sky Bet League One.

Depending on other results, even that may not be needed, but there is no doubt that Mark Bonner’s men will want to produce a performance and result that leaves no doubt about where the Club will be playing next season.

Despite their relegation to the National League, Grimsby Town may be heading into the game with a renewed sense of optimism following the news of a successful takeover by Jason Stockwood and Andrew Pettit on Wednesday.

For just the second time this season, the U’s head into the game off the back of two straight defeats. Prior to that, United won their previous two games in a row and across the last 10 league games, Cambridge have won six, drawn one and lost three, allowing the team to be in such a strong position during the final weeks of the season.

Grimsby’s form has much improved in recent weeks, having only lost twice from their last 14 league games. During that spell they have draw seven and won five, including last time out against Port Vale. In the end, their revival was too little, too late as their fate was sealed with two games to spare.

Cambridge United and Grimsby Town have a storied history of competitive fixtures against each other, going back to the 1970-71 season when it was the Mariners who completed a league double against the U’s in Division Four.

United picked up their first of 13 victories against Saturday’s opponents the following season, with a 3-1 win at the Abbey but it’s Grimsby who narrowly have the head-to-head advantage, with 14 wins in addition to seven draws.

The U’s are unbeaten against the Mariners in their last six games though (4W, 2D), dating back to 2017.

Speaking ahead of the game, U’s Head Coach Mark Bonner said, “If you offered this at the start of the season everyone would have bit your hand off. Your context, targets and expectations do change as the season goes on but I think what you see across quite a few leagues is that the last bit is harder than it sounds sometimes. It’s what happens and I’m pretty sure that the teams that are beneath us would swap places with us going into the game.

“We are in the driving seat and the buffer that we have built is off of our own performances, results and quality throughout the season. In similar style to the majority of the season, we roll on.

"We have had a good training week and everyone is looking forward to the game and is excited by it. We are understanding everything that is at stake but if you make your lens too wide ,you become distracted by what this is about, which is 22 players on the pitch trying to get a result.”

Tom Nield has been appointed Match Referee, with Andrew Dallison and Michael Webb named as his Assistants. Nield has refereed 31 games this season, handing out 109 yellow cards and three red cards. His last U’s match was the 2-1 win at Carlisle in March, in which three cautions were brandished.

Saturday’s match is available to watch with an iFollow Match Pass. Match Passes cost just £10 and are available to buy now. The simplest way to do so is by clicking here and selecting the Grimsby fixture. Either log-in to your existing iFollow account or create a free account by clicking ‘Register Now’. 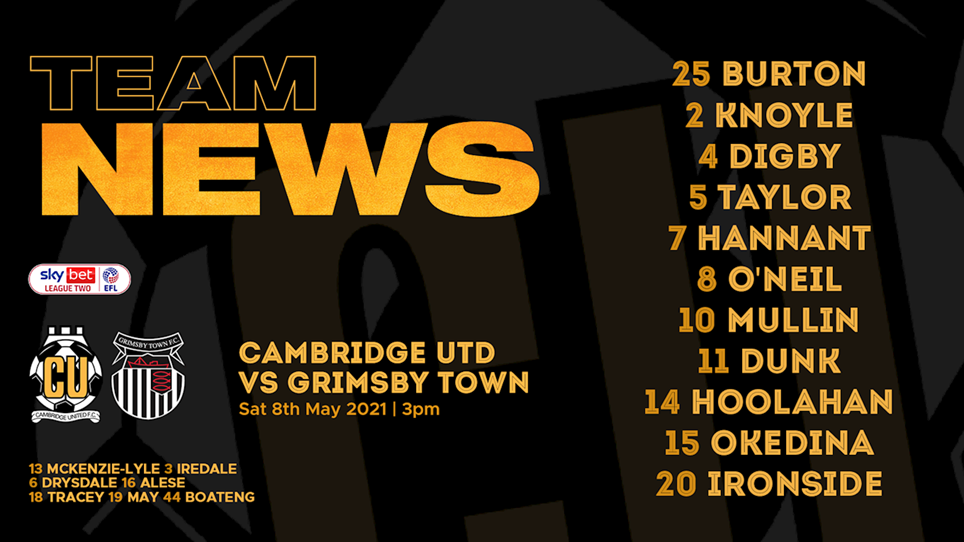 
The U's Team News is in and Mark Bonner has named three changes for this afternoon's 3pm kick-off against Grimsby Town... 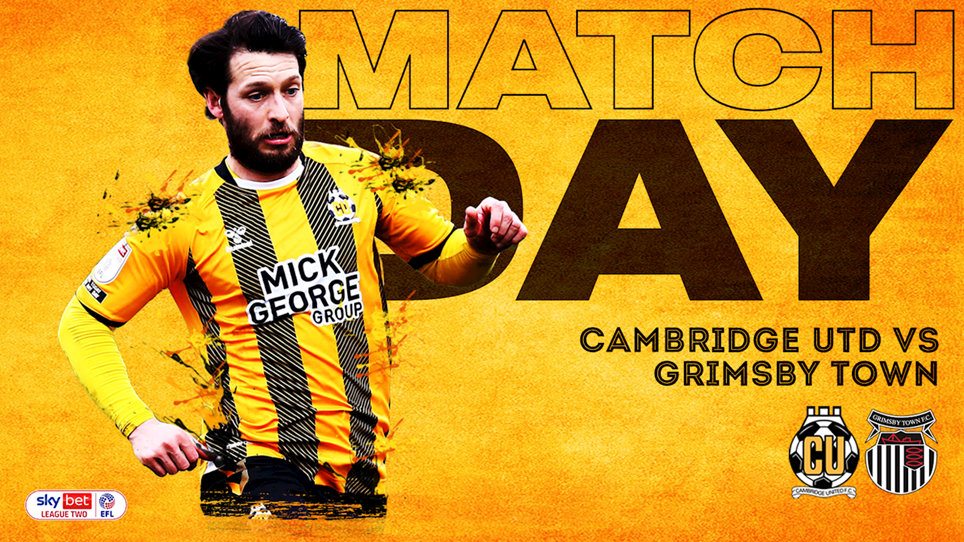 
It's the final U's Matchday of the season and Grimsby Town are the visitors to the Abbey Stadium... 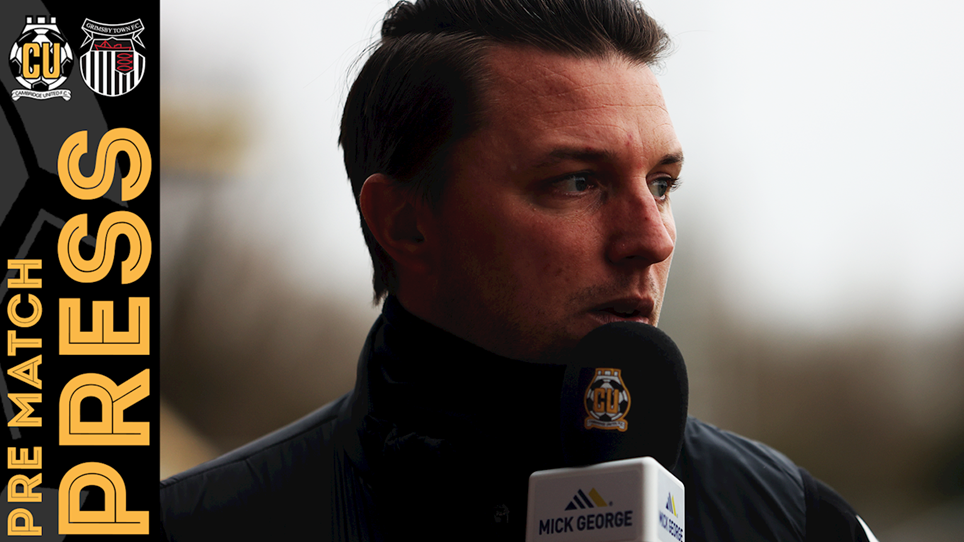 An unstoppable Liam O’Neil strike put the U’s in the driving seat, before sumptuous free-kicks from Wes Hoolahan and the record-breaking Paul Mullin rounded off the scoring to ensure the season curtailed in an applaudable 2nd position.

Mark Bonner made three changes to the side that were on the receiving end of a preposterous 5-4 defeat to Harrogate Town eight days earlier, with Jubril Okedina, Harrison Dunk and Liam O’Neil returning to the fold.

The U’s had full control of their fate going into the encounter, knowing that the avoidance of a defeat would see them over the line. They were no doubt adamant to conclude a sublime campaign with a convincing performance nonetheless. Where the Mariners were concerned, they couldn’t escape relegation to the National League, despite a late revival. In spite of the setback, they boasted a record of just three losses in their last 14 and will be optimistic for a swift return.

United started the match in a cautious manner and bided their time before conjuring up the first shot at goal through Paul Mullin on the 6th minute. After being teed up by Kyle Knoyle down the right flank, the striker couldn’t find the corner of the net from 12 yards as James McKeown calmly collected.

The next attempt fell the way of the visitors moments later when Matthew Pollock leapt well to meet Luke Spokes’ cross but the header was diverted wide of Callum Burton’s right post.

The U’s sparked euphoria by drawing first blood on the 25th minute. An excellent header into the mixer from the battling Joe Ironside found its way to an unmarked O’Neil who, from 10 yards, unleashed a hammering volley into the roof of the net to send his side into delirium.

With chances at a premium, the breakthrough allowed the hosts to stamp their authority in the middle of the park and professionally see out the first half to ensure Bonner’s side were halfway to glory.

The intensity continued from the U’s after the interval - remaining composed all over the park. They entered dreamland on the 56th minute when the advantage was stretched to two goals. A delightful Hoolahan free-kick from the far right was whipped towards the danger zone, evading the visiting backline and nestling in the back of the net. United were on the cusp of a magnificent feat.

Whilst the goal boosted United’s spirits, it knocked the stuffing out of the Lincolnshire side who couldn’t pepper a stern backline. Harry Clifton went close for Paul Hurst’s men on the 75th minute, his drilled attempt from 25 yards comfortably gathered by Burton.

Four minutes later, the U’s could already taste the first sip of champagne when Mullin cannoned a barnstorming free-kick past McKeown to shut up shop and congregate with his jubilant teammates. It secured yet another record for the top scorer, his 32nd league strike of the campaign is now the most in a single season since League Two’s 2004/05 introduction.

And just like that, United’s seven-year stay in the fourth tier was over. A first return since 2002 to the third tier of English football beckoned.


The U's Team News is in and Mark Bonner has named three changes for this afternoon's 3pm kick-off against Grimsby Town...


It's the final U's Matchday of the season and Grimsby Town are the visitors to the Abbey Stadium... 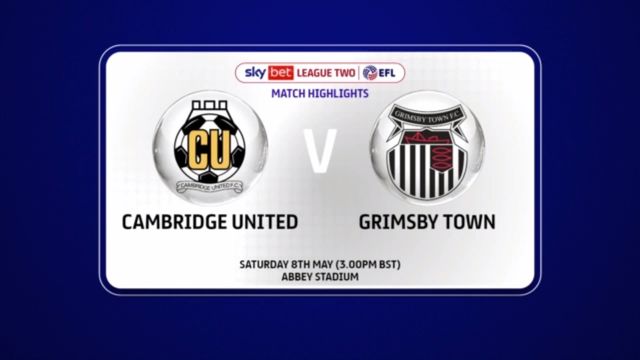 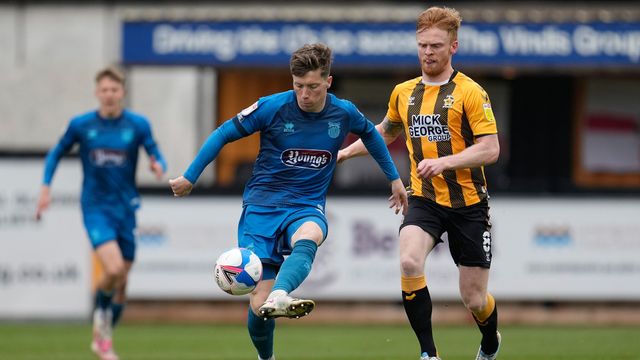