Paul Mullin’s record breaking 25th goal of the season and a late Adam May winner saw the U’s claim three points on their way to a 1-2 away victory at Carlisle United.

United registered goals late in each half to ensure they made it three consecutive Sky Bet league Two wins, despite Lewis Alessandra’s second half equaliser.

Mark Bonner’s unchanged U’s side got off to a slightly scrappy start but created the first opportunity of the game on 14 minutes, with a beautifully crafted one touch passing move between Hoolahan and Boateng that freed up Paul Mullin for a shot from 18 yards that forced Paul Farman into a strong save.

The U’s warmed to the task from there and clearly looked the side in the ascendency for much of the first half, although Farman was not called into action in the Cumbrians goal too frequently.

Jack Iredale missiled a cross field pass in behind the host’s defence to pick out Mullin, and the striker checked his run before seeing his effort deflected wide of the target on the half an hour mark.

It looked as if the game would be level at the break until an action packed two minutes of stoppage time. Callum Burton was called into his first action of the match, and showed excellent alertness to palm away an in-swinging shot by Omari Patrick which would have stunned United against the run of play.

As it was though, the U’s had the opportunity to counter from the rebound, and when the ball found its way to Paul Mullin with the chance to attack the Carlisle penalty area, the U’s striker duly turned his opposite number inside and out before smashing home a convincing finish to mark a landmark goal, moving him past David Crown’s club record for League Goals in a season in some style.

The striker was replaced on the hour mark having taken a blow in a challenge with Aaron Hayden in the first period, with Luke Hannant and Shilow Tracey introduced by Mark Bonner with the aim of providing United fresh legs to see out the three points.

A big save from Burton on 66 minutes, when the keeper rushed off his line to close down Gima Toure after a scrap in the U’s box from a long throw, ensured United remained ahead. The U’s keeper was well positioned again to calmly pat down a thunderbolt from Omari Patrick ten minutes later.

However, the U’s succumbed to mounting pressure shortly after when another scrappy set piece delivery into their 18 yard box, was scrambled in by Lewis Alessandra to level the scores at the back post.

Bonner’s men held their nerve though and clinched the win with a blistering counter attack in the 89th minute. Shilow Tracey stretched the Carlisle defence before picking out Wes Hoolahan in space, who showed every ounce of his class to roll a cross into the path of Adam May with the midfielder displaying an equal measure of composure to slide in a winner. 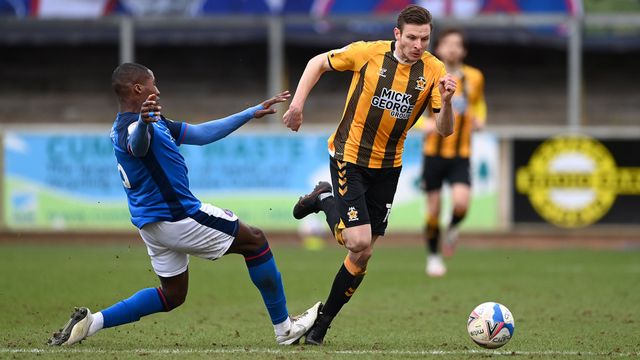