Cambridge United hit the front in Sky Bet League Two with a determined display against Southend United to leave Roots Hall with a 1-2 victory.

United trailed to Simeon Akinola’s header during a poor first half, but responded manfully with Jack iredale and Joe Ironside on target after the break as they secured their fifth win in eight games to move top of the division.

United made three changes with Luke Hannant missing with an ankle injury, Wes Hoolahan rested and Harvey Knibbs on the bench in place of Joe Ironside. Leon Davies and Jack Iredale both returned to the starting eleven.

Despite the U’s dominating the early phases of possession, Southend had the first opportunity of note when Simeon Akinola got in behind United’s back four only to be closed down quickly one on one with Mitov. The resulting corner then directly hit the frame of the Bulgarian’s goal with Mark Bonner’s men coming through both scares unscathed.

From there the home side, looked to cause United issues with deliveries into their box, loasing up the area for all throws and set pieces within range.

On 17 minutes Timothee Dieng was afforded too much room to win a header in the centre of the U’s area, but placed his effort right at Mitov who was able to get both gloves to the ball, before Greg Taylor cleared the danger.

However, the hosts did breakthrough in the 27th minute, the U’s failing to deal with an in-swinging corner and Akinola rising highest amongst a pile of bodies in the six yard box to direct the ball in from close range.

United’s only chance of the half came six minutes before the break. Paul Mullin’s 25 yard free kick was spilt by keeper Mark Oxley, who scrambled to stop Paul Digby knocking in the rebound, and the U’s midfielder’s appeals for a penalty were turned down by referee Bobby Madley.

Bonner’s men will have undoubtedly been disappointed with their first half display, but they wasted no time in making amends. Jack Iredale collected a cross field ball from Harrison Dunk expertly on his chest, and followed it up with a vicious side winding half volley which flashed past Oxley to level the scores a minute into the half.

Dunk made an equally important contribution moments later up the other end when he slid across to cover in behind Harry Darling and deny Emile Acquad the opportunity pull the Shrimpers back ahead.

The match continued at a feisty pace, with tempers occasionally flaring between both sets of players.

Bonner’s side got their noses in front on 67 minutes though, when Paul Mullin was this time the recipient of another exceptional diagonal pass by Dunk. The striker took it in his stride, getting to the byline and fizzed a pass through the six yard box for strike partner Ironside to ram into the Southend net.

The U’s were far from home and hosed though, as Akinola proved when his well struck attempt from 20 yards had Mitov rooted to the spot but clattered the outside of the U’s keeper’s left post.

Ironside was tantalisingly close to heading home a second of the game on 80 minutes, he jumped at full stretch to make contact with an excellent Leon Davies corner, but the ball dropped just wide of the mark with Oxley beaten.

It mattered not though, as the U’s saw the remainder of the match including seven minutes of stoppage time to complete another battling result. 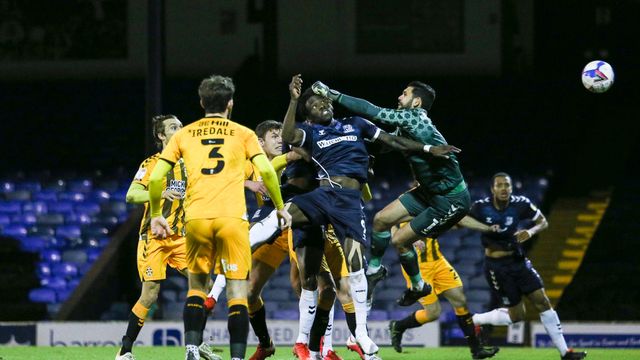