Cambridge face Newport at 12:30pm on Saturday 17th April 2021, with the early kick-off arranged in-order to prevent a clash with the funeral of HRH The Prince Philip, Duke of Edinburgh.

With just five games to go in the Sky Bet League Two season, the U’s are nicely poised in second place, one point off top placed Cheltenham and with a five-point cushion over Morecambe in fourth.

Newport are just a few places below that in sixth, once again battling themselves for promotion into Sky Bet League One.

Despite a loss last time out at home to Exeter City, United are in superb form overall with four wins, one draw and that one defeat from their last six games. The U’s have been in fine fiddle on the road too, with five wins from their last eight outings away and a run of scoring at least once in each of the last 11 games away.

The two teams have played each other 34 times in total, with Cambridge narrowly having the better of things, winning on 15 occasions to Newport’s 14. The first time the two club’s played was in the FA Cup back in 1953, when a 2-2 draw was followed up by a 2-1 win in South Wales to see United through to the next round.

The last meeting between the two sides was in October 2020, when a brace from Paul Mullin helped secure a 2-1 win at a rain-soaked Abbey Stadium.

Speaking ahead of the game, U’s Head Coach Mark Bonner said, “Over the last few weeks other results have given us this opportunity, as well as our own. You go back to pre-Oldham and everyone had games in hand and we went on an excellent run ourselves and Tuesday’s results were favourable to us. It’s provided us with a brilliant opportunity going into the last five games where it is in our control. The main focus needs to be ourselves and getting ourselves to the level that we know we can get to.”

“As long as we do that, it is in our control to some extent and we won’t be heavily reliant on other results. The main thing is when you start a season is you want to get to this point where you can really dictate what happens next and players like responsibility. In this situation, we are responsible for our own performances and destiny and that is a brilliant position to be in and an exciting challenge that we have now got over the next few weeks.”

Following their point at home to Carlisle on Tuesday, Newport Manager Michael Flynn said, "It was a hard-fought point and it hasn’t done us too much damage. It was a nervy, hard-fought game between two teams who maybe aren’t at 100 per cent of their form. We have got another tough one on Saturday and the confidence will be good because we finished on a high.”

Mark Bonner has confirmed that whilst no long-term absentees are set to return, Aji Alese is back in contention after returning to training this week, whilst Harvey Knibbs is still out as he continues his rehab from an injury to his knee.

Thomas Bramall is in-charge of Saturday’s fixture and has handed out 67 yellow cards and four red cards across 29 in the EFL this season. His last Cambridge game was on 11th February 2020, for the 2-0 win at Scunthorpe in which no cards were brandished.

He will be joined by Assistants Thomas Harty and Christopher Wade. Kevin Morris is listed as Fourth Official.

Saturday’s match is available to watch with an iFollow Match Pass. Match Passes cost just £10 and are available to buy now. The simplest way to do so is by clicking here and selecting the Newport fixture. Either log-in to your existing iFollow account or create a free account by clicking ‘Register Now’.

Make sure to stay across the club's website and social media channels in the build up to kick-off, as the Matchday Live Team will once again be on the scene to take you closer to the action at Rodney Parade. 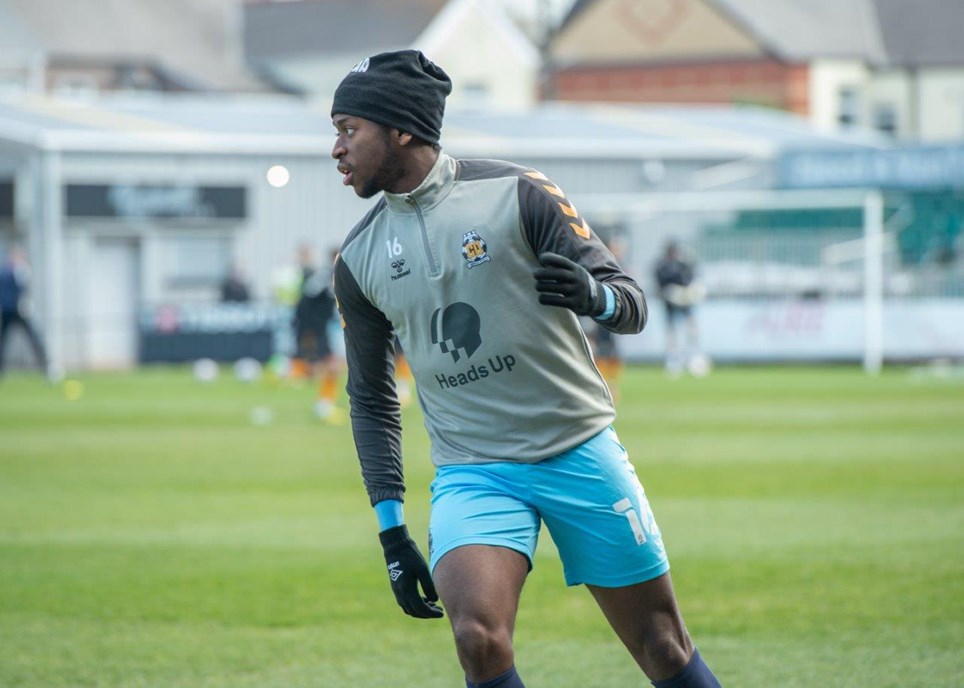 
Cambridge United returned to winning ways on Saturday with a 1-0 win over Newport County... 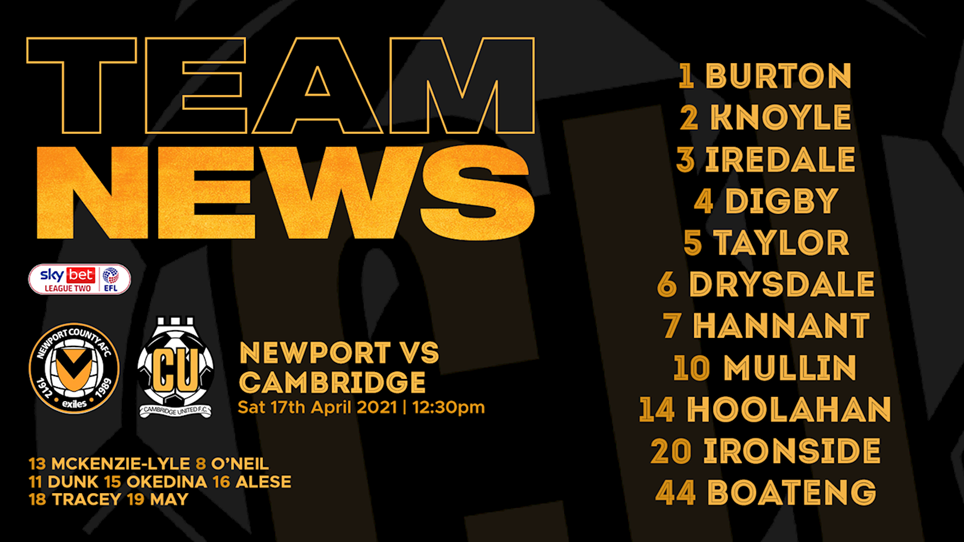 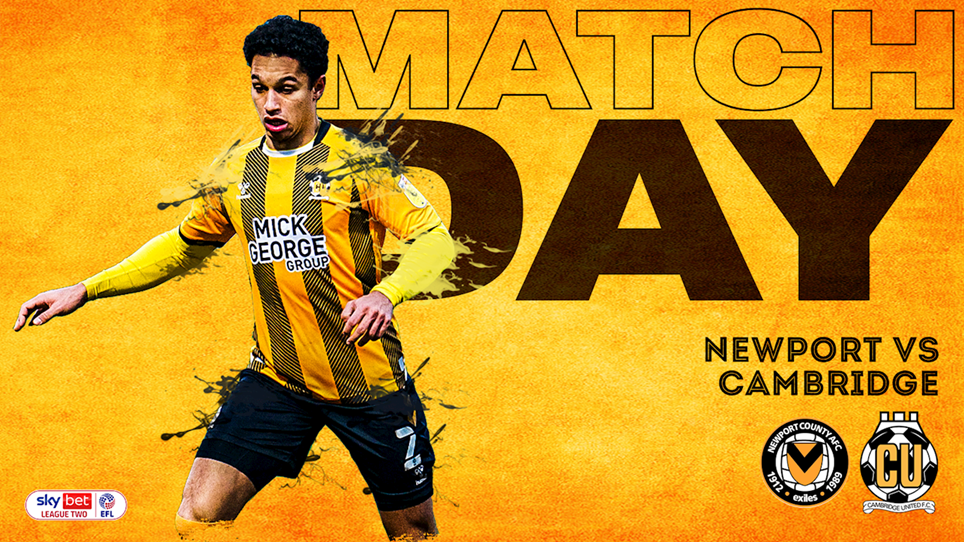 
It's Matchday for the U's and South Wales is the destination for Mark Bonner's side...

Cambridge United marched back to the top of Sky Bet League Two with a precious 0-1 win over Newport County at Rodney Parade...

Declan Drysdale’s debut goal for the Club was enough for the U’s, who completed a double over the Welsh side for the season with another hard fought victory.

Mark Bonner named two changes to his side, as Declan Drysdale returned to the centre of the defence and Luke Hannant started in midfield.

A high intensity first 45 minutes shot out the blocks, with both sides displaying attacking intent from the get go.

The first chance fell the way of the U’s when Paul Mullin clipped a cross into strike partner Joe Ironside, who wrestled off his marker Liam Shephard to make contact with his head but couldn’t get the better of Exiles keeper Townsend at close range on seven minutes.

Less than a minute later, Callum Burton was required for his opening action of the clash, calmly watching Josh Sheehan’s 25 yard strike onto his gloves low down to his right and parrying the ball wide. He showed an equal measure of alertness to ensure a piledriver by Aaron Lewis also didn’t find its way past him on 11 minutes, with the hosts turning the pressure up on Bonner’s men as the half approached the midway stage.

United were up for the challenge though, and aside from a looping Scott Bennett effort shortly before the break that landed on the roof of the net, their goal remained largely untroubled in a scoreless first half.

Bonner’s men begun the brighter after half time, and were unfortunate not to take the lead from Luke Hannant’s cleanly struck attempt from 20 yards, which had the beating of Townsend but was flicked onto the cross bar by former United loanee Mickey Demetriou.

Mullin rolled into a shooting position on 50 minutes, but on his weaker foot his effort was an easy one for Townsend to grasp.

The U’s continued to apply the pressure and had their best chance of the match on the hour mark. Hannant’s delivery to the far post fell to an onrushing Ironside who directed it back across goal, where Mullin was unable to sort his feet in time to turn it into an empty net, instead hitting the base of the post.

Burton denied Josh Sheehan for a second time in the contest with 20 minutes to play, as the United keeper got across quickly to tip a free kick by the Exiles midfielder around the post.

The deadlock was finally broken in the 78th minute and momentum swung firmly the way of the U’s, as Wes Hoolahan delivered a looping set piece in from the right hand side, which sat up perfectly for Drysdale to attack and direct into the Newport net.

It set up a tense final ten minutes for Bonner’s men who were made to fight hard to hold on to their lead. But they did so manfully and moved back up to top spot and within touching distance of promotion from the division.


Cambridge United returned to winning ways on Saturday with a 1-0 win over Newport County...


It's Matchday for the U's and South Wales is the destination for Mark Bonner's side... 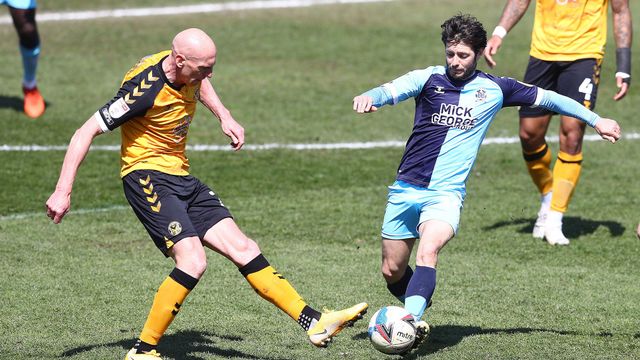