Cambridge United were made to pay for a costly first half at the Breyer Group Stadium, as Leyton Orient claimed the three points with a 2-1 victory.

Jordan Maguire-Drew and Danny Johnson had given the O’s a two goal advantage at the break, and despite Paul Mullin pulling a goal back and an improved second half display, United had left themselves too much to do in East London.

The U’s lined up with one change as Paul Lewis returned from injury in place of Idris El Mizouni who had switched back to his parent club Ipswich Town earlier in the week due to medial ligament damage. On the bench Tom Knowles, Sam Smith and Ben Coker all came into contention for United.

The encounter got off to a hefty pace with Orient looking lively in the opening quarter of the match. Danny Johnson squirmed a shot wide after getting the better of Harry Darling inside the United area, whilst Callum Burton watched a powerful drive at goal by Ouss Cisse from 25 yards well enough to pounce on his palm down inside the opening 15 minutes.

United’s first opening of the game came from a textbook Leon Davies cross, which whipped into the path of Mullin at the far post, who pulled it back for Maris eight yards out. The midfielder wasn’t able to make clean contact though and his effort skewed well away from the goal.

When a United attack fell through on 18 minutes, the O’s hit back on a counter attack with Craig Clay haring the length of the field before laying it off to Jordan Maguire Drew. He shifted on to his right foot and drilled a shot into the far corner to register the opening goal for the hosts.

Bonner’s boys responded well and were a lick of paint away from equalising when Paul Mullin flicked on an in-swinging Harrison Dunk free kick that struck the woodwork.

However, as the U’s looked to be heading down the tunnel with just a single goal deficit, Orient registered again deep into three minutes of added time. Callum Burton failed to keep a grasp on a shot by Maguire-Drew and the loose ball was tapped in by Danny Johnson at close range.

Samir Carruthers was forced off with a knock shortly after the break, and Liam O’Neil replaced him in midfield to partner Paul Lewis in the centre of the field.

Callum Burton responded to the disappointing manner of the second Orient goal with a superb point blank stop shortly after, spreading himself to block Johnson’s stab at goal on the end of an O’s corner to keep United in the contest.

United hauled themselves back into the game on the hour mark, when Paul Mullin lurched onto a loose ball in the Orient area, battled past a cluster of defenders before scurrying a shot past Vigouroux into the far bottom corner to give the travelling United support belief once more.

Mark Bonner introduced both Jack Roles and Sam Smith in the second half to give United an extra attacking impetus to seek a way back into the encounter.

Burton produced another important save eight minutes from time, positioning himself perfectly in order to get both hands to a volley from Orient sub Jobi McAnuff and keep the U’s in with a chance.

The closest United came to sparking late limbs in the away end was quashed with a stunning full stretch save from Lawrence Vigouroux, who palmed away Jack Roles’ precise effort which for a moment looked to have the beating of the O’s keeper in second half stoppage time.

The U’s are set to be backed by the Amber Army’s biggest away following of the season for match up with the O’s. Already over 1,300 U’s fans have secured their tickets for the fixture, meaning there are now a limited number of tickets remaining from Cambridge United’s away allocation of 1,390.

A reminder that Saturday's fixture is now ALL TICKET, so Cambridge United supporters therefore have until 2:30pm today to secure their place for the fixture.

Tickets are available online at cufcdirect.com or by calling 01223 566 500, and are priced as follows:

Away travel for Saturday’s trip to East London has already sold out! 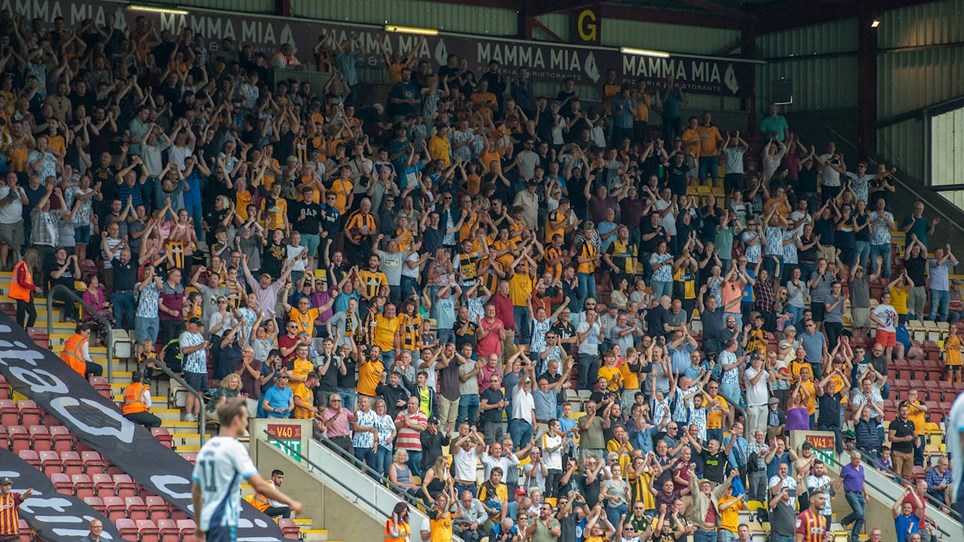 
Cambridge United will be backed by the Amber Army’s biggest away following of the season for this Saturday’s Sky Bet League Two clash with Leyton Orient.