A fine header from Greg Taylor and a gritty away display from Cambridge United saw them take the spoils, picking up a vital win over Notts County in front of a bumper crowd at Meadow Lane

The game and United settled into a solid rhythm early on, and whilst they didn’t create a mass of chances looked comfortable in front of a raucous and hefty crowd.

The first flash at goal came from Calderwood’s men when George Maris’ shot from long range deflected off Jabo Ibehre, wrong footing Notts keeper Ryan Schofield, who could watch as the ball bobbled fractions wide of the his left post on 18 minutes.

Krystian Dennis twisted and turned with possession inside the U’s area midway through the half but his squirmed shot through on goal missed the target, whilst Greg Taylor and George Taft kept David Forde largely untested for the majority of the half.

Brad Halliday’s excellent drive at goal which saw Schofield produce an impressive save at the expense of a corner, led to the opening goal on 40 minutes. From the resulting set piece George Maris lofted a precise delivery over towards the far post where Taylor leaped highest and produced a header of equal quality, looping the ball over the keeper and into the net to send the travelling amber army into delirium in the away end.

And Forde showed he was still well alert moments before the break, as the U’s shot stopper threw himself across his goal to get his right glove on a vicious strike by Jim O’Brien to protect United’s advantage.

The hosts upped their tempo after the break and saw more possession of the ball. They carved out a golden opportunity just after the hour mark with a tricky sequence of passing splitting the U’s defence before Dennis shot from the acutest off angles across the United goal line and wide.

Cedric Evina almost picked out a fluke lob when his cross on the volley looked to have the beating of Forde, but dropped off target with 19 minutes to play.

Harrison Dunk and Ade Azeez were introduced by Colin Calderwood as the game moved into the final quarter and United aimed to manage the remainder of the contest.

And despite a nervy six minutes of stoppage time to endure, the U’s did just that backed wholeheartedly by the tremendous support of the travelling amber army.

It’s set to be an AMBER INVASION for this weekend’s Sky Bet League Two trip to Notts County, with over 1,000 tickets sold already!

A huge crowd is expected with tickets priced at just £2 for the clash, in which Colin Calderwood’s men will need the full support of the travelling Amber Army to help make it consecutive League wins.

The match at Meadow Lane is an all ticket fixture, so supporters must purchase in advance of match day by heading to cufcdirect.com, in-store or by calling 01223 566 500.

THE U’S NEED YOU!

A second away coach has now been booked for the fixture, with away coach travel departing Ely at 10:15am and the Abbey Stadium at 11am.

Places are priced as follows: 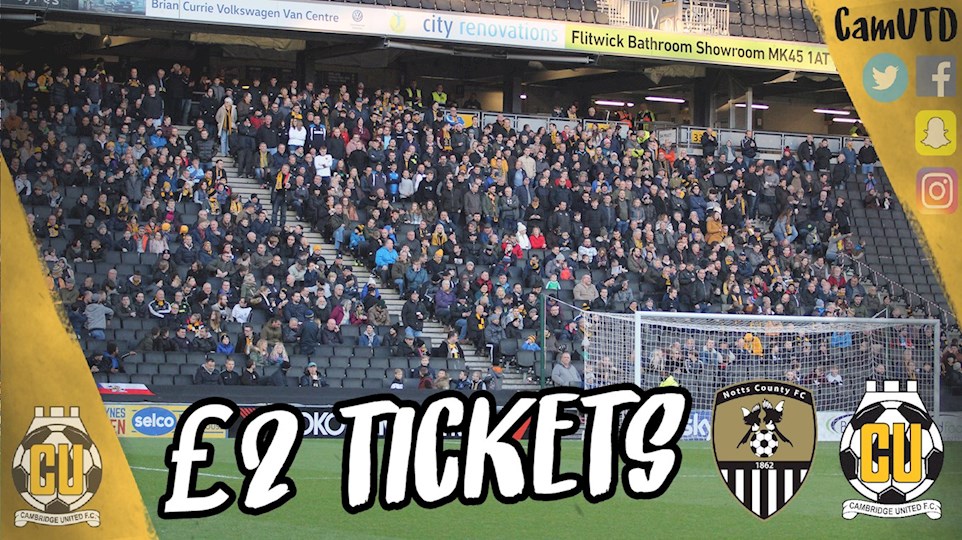 GET BEHIND THE U’S AT NOTTS COUNTY FOR JUST £2!


All tickets for the Sky Bet League Two trip to Notts County next Saturday (11th January, kick off 3:00pm) are available for just £2!