Cambridge United secured another excellent point on their run of fixtures against Sky Bet League Two’s promotion and play-off contenders, with a 1-1 draw against Carlisle United at Brunton Park.

George Maris’ sixth goal of the campaign on 48 minutes cancelled Richie Bennett’s opener moments earlier, before a resolute U’s side showed their grit to come away from Cumbria with a point.

The U’s lined up with one change to the side that fell to a defeat against Swindon Town in their previous Sky Bet League Two outing, with former Carlisle man Jabo Ibehre returning for United in place of Billy Waters.

The hosts began the game the brighter of the two sides, with Hallam Hope smashing an early shot from inside United’s area wide of David Forde’s near post, before the U’s keeper was forced to deny James Devitt’s low strike from an acute angle in the sixth minute.

A clever inside pass from Mark Ellis on 17 minutes opened up space for Gary Liddle to drive into the U’s area and shoot, but Greg Taylor did just enough to put the wide man off who dragged a bobbling shot away from goal 12 yards out.

As the half progressed Carlisle continued to look the side more threatening in front of goal and United were made to defend well for sustained periods, but defend they did and they showed glimpses on the counter attack with Uche Ikpeazu steaming up field.

And on the occasion where Cumbrians striker Richie Bennett found space to hit a Devitt set piece delivery on target, U’s keeper Forde produced a magnificent stop low to his right at point blank range to ensure the scores remained level going into half time.

However, a minute after the restart the deadlock was broken by the hosts when a deep cross ifrom Devitt was directed back across goal and into the path of Richie Bennett to tap in from close range.

Joe Dunne’s men responded almost instantly though, Jevani Brown whipping a cross to the far post which was headed firmly by Jabo Ibehre towards George Maris six yards out who planted a header into the Carlisle net on 48 minutes to level.

From there the game opened up for the U’s who began to find themselves in possession higher up the pitch with more regularity and looked capable of being able to pick up a potential second and winning goal.

A ball in behind from Jevani Brown caught the Carlisle defence out midway through the second period, and saw George Maris do brilliantly to keep the ball in play before pulling a cross back for Brown on the edge of the area, whose shot was blocked by a covering Carlisle leg.

Maris was then unfortunate not to turn in a Halliday cross minutes later during United’s strongest spell of the game, following a well worked Cambridge move which ended when the ball flicked off defender’s boot and bounced off the chest of the midfielder in a great position at the front post.

The final ten minutes saw the U’s drop deeper and David Forde was on hand twice to produce a pair of excellent stops against Jamie Devitt and Mark Ellis to protect a hard-earned point for United.

Kick off your Easter bank holiday weekend at the Abbey this Good Friday, as the U’s take on Crawley Town in Sky Bet League Two (K.O. 3:00pm).

As always supporters who purchase tickets before match day will save £2 off full match day prices, and we’ll also have a few “eggcellent” surprises in-store for Junior U’s too! 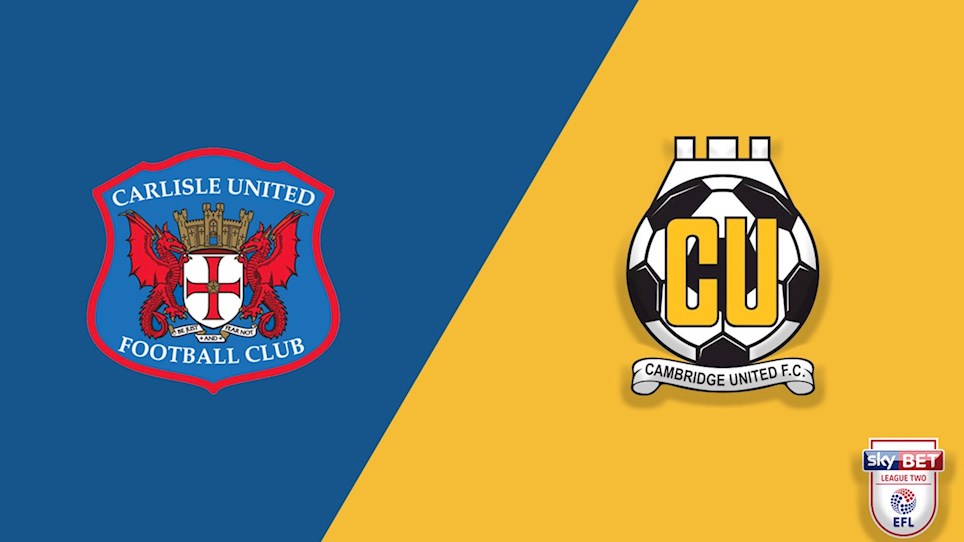 AWAY TICKETS AND TRAVEL | CARLISLE UNITED


The U's are back on road this Saturday against Carlisle United at Brunton Park with tickets available online at cufcdirect.com and in-store today!