Cambridge United fell to a 1-2 defeat in their opening home match of the 2017/18 Sky Bet League Two season at the hands of Carlisle United.

Reggie Lambe’s early strike was cancelled out by a Medy Elito penalty, before Tom Parkes registered the winning goal in the 40th minute.

The U’s lined up with the same side that finished the encounter with Exeter City strongly at St James’ Pak in their previous League fixture seven days earlier.

David Forde was forced into an early double save, but the experienced keeper could do nothing to stop Regge Lambe giving the hosts a ninth minute lead when the Carlisle man picked out the bottom right corner from 12 yards.

The U’s responded well with Uche Ikpeazu going close with a mid-range shot, before Medy Elito was awarded a penalty four minutes later and made no mistake slotting into the bottom left corner to equalise.

Shaun Derry’s men then produced a dominant 20 minute spell, with Ibehre spurning two opportunities against his former side whilst David Forde stayed firm at the other end in his home competitive debut.

However, it was Carlisle who would restore their lead five minutes before the break against the run of play, when centre-back Tom Parkes was on hand at the far post to prod in a second for Keith Curle’s side.

Forde was called into action ten minutes into the second period, denying Danny Grainger’s rocket of a free kick.

Elito looked to be in for his second of the afternoon when he rounded Jack Bonham in the Carlisle goal and netting, only to see the effort chalked off for an offside.

A swashbuckling charge up field from Uche Ikpeazu on the hour mark looked to have unlocked the Carlisle defensive unit, only to see his shot blocked.

Mingoia, Dunk and Ade Azeez were introduced by Shaun Derry in the second half as the U’s pushed for an equaliser.

However, the closest they came was an Ibehre header which was pushed on to the cross bar by Bonham before the Carlisle shot stopper pounced on the loose ball eight minutes from time.

Following back-to-back games on the road to kick off the new season, United finally mark their home return this weekend as they go toe-to-toe with Carlisle United at the Cambs Glass Stadium this Saturday.

Kicking off at 3pm, Shaun Derry’s men will be looking to pick up their first three points of the season and will need the full backing of the Amber Army.

As with last season, supporters who purchase before midday on match day can save £2 when buying in advance.

Full Tickets are priced as follows: 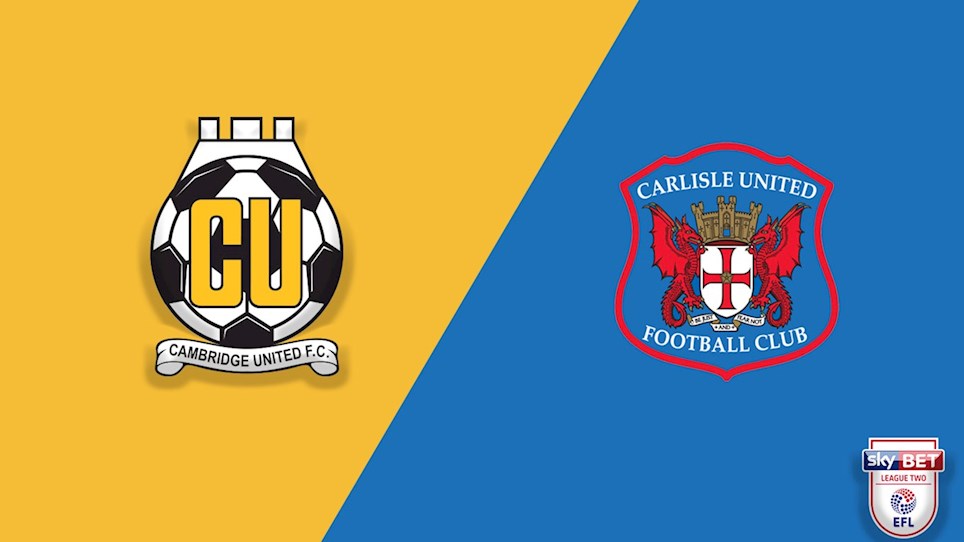 
The wait is now over! Football is back, the U’s are back at home this Saturday!